Nuns — it seems they’re seen through one of two lenses: saintly or subversive. Nunsense: The Second Coming explores the in-between, taking central protagonists the Sisters of Hoboken as fully formed people who worship, sing and even dance when the moment calls for it.

Linck herself is no stranger to the world of Nunsense musicals created by Dan Goggin; she once played the role of Reverend Mother in Nuncrackers: The Nunsense Christmas Musical.

Nunsense II picks up after the events of Nunsense as the sisters stage a variety show at Mt. St. Helen’s High School, where the students are in the midst of performing Gilbert and Sullivan’s The Mikado, a comic opera set in Japan. In addition to juggling two different shows, the sisters also have to contend with Franciscans who come for Sister Robert Anne — known as “Sister Amnesia” after a head injury — and her prize winnings from the Publishers Clearing House sweepstakes.

“I had forgotten how much fun this premise is,” Linck said of her return to the Nunsense universe, this time as director.

Although not Catholic herself, Linck said her husband attended Catholic high school.

“Dan Goggin wrote this; he’s Catholic. It’s from the home, making fun of themselves. It’s recognizing all the craziness that goes on and celebrating it,” Linck said.

For Linck, the show’s tightrope walk between religion and humor manifests in the nuns themselves and the women who play them.

“I would like to show the strength of these women,” she said. “They’re talented vocalists, but they’re also talented actors and dancers.”

The small cast size makes for familiarity with the director — Linck has previously worked with Swain and Raney — but also with the audience.

“I wanted to make sure that our audience connects with these people. I fully expect them to come up and want to talk to the sisters when we’re done,” Linck said. “Our curtain call will allow them that opportunity. We need that connection in our world, no matter what our faith is.” 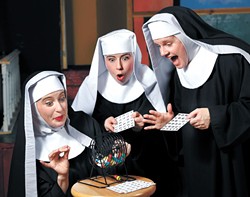 In the 172-seat Jewel Box (known as The Round), Linck said the audience is always a priority.

“One of the things we’re most worried about … is that our audience, no matter where they’re sitting, feels engaged and part of what’s happening and has good sightlines,” she said.

Nunsense II — a show about nuns performing another show — adds several layers of complexity for the director and performers. One main element, costuming, naturally takes the form of habits for the sisters.

“So much of their body language is shut off,” Linck said. “The only part of them we see is a very limited version of their face.”

Because of costuming limitations, Linck said the cast has paid special attention to blocking and choreography to ensure audience visibility.

The Jewel Box’s unique setup — a circular theater with a central stage — also allows for actors to move more freely amongst their spectators.

“We can be really up close and personal with them,” Linck said. “They might have a nun on their lap.”

Other vital elements for any musical — song and dance — inform both the technical and thematic elements of Nunsense II, according to Linck.

“People will be surprised to see dancing nuns, but they actually have a tap number, and they have a polka and several other dances that make for some comic relief,” she said.

Further layering ensues when the nuns incorporate Japanese-themed props from The Mikado.

As a result of these many elements, Linck described the play as both wacky and tender.

“There’s something special about a nun,” Linck said. “Whether you’re Catholic or Muslim or Protestant, when you walk by a nun, you feel that you need to behave — and these nuns don’t necessarily behave. You get to see them as real people, and that’s what makes you fall in love with them.”

Maybe that’s how Nunsense: The Second Coming, with its nuns in habits and its meta performances, makes a new kind of sense.