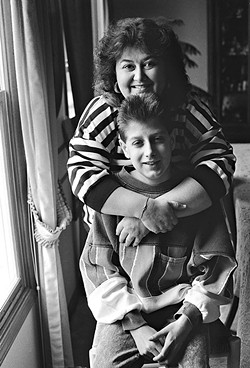 “The Positive Heroes Series is a chance to connect our community with people that have been affected by HIV and AIDs to bring better awareness and education and to create a positive space for the conversation to unfold,” said OACF marketing associate Russell Shelton.

This year, the series features Jeanne White-Ginder, the mother of Ryan White. He died in 1990 after contracting AIDS from a 1984 blood transfusion used to treat his hemophilia. He was diagnosed with AIDS at the age of 13 and was only expected to live for six months.

However, those six months turned into five years. During those years, White and his mother fought discrimination that stemmed from a lack of education and understanding.

That included a battle for White to be allowed to attend school.

OACF hopes the Positive Speakers Series will become an annual event, and plans are already in the works for next year.

“The main goal is inclusivity and just talking about the stigma and why there doesn’t need to be the stigma surrounded by the disease,” Shelton said. “It’s to create a positive environment for all of us in the community; not just people with a positive status, but all of us. Because this really affects the whole community whether we realize it or not.”

OACF formed in 1992. The organization works to educate Oklahomans about HIV and AIDS and offers those with a positive status a system of support.

This includes a grant and emergency program that directly helps infected patients and their families with financial needs.

This year, it also started moving toward public policy advocacy. This legislative session, OACF worked with Rep. Emily Virgin, D-Norman, on a bill that would update HIV and AIDS prevention in schools.

“It’s required to enter schools at least twice a year to provide HIV and AIDS awareness and prevention in all of the public schools,” said OACF executive director Cher Golding. “That legislation, that bill, hasn’t been updated since 1987, so a lot has changed in the disease. We know a lot more since 1987, so what we really wanted to do was work with the department of education and the health department, and we worked with Rep. Emily Virgin to create a bill that would update the language and make it more current.”

House Bill 1538 included updated information about the disease itself as well as how it’s spread since it’s currently difficult to find any curriculum that doesn’t match the old way of thinking. Part of that included specifically teaching students that the only way to prevent HIV and AIDS was by avoiding homosexuality, promiscuous sexual activity and drug use.

It also taught that “abstinence from sexual activity [was] the only certain means for the prevention of the AIDS virus through sexual contact.”

“To help better educate children and youth in our schools, they wanted to update the language so you can access curriculum from the health department and the CDC (Centers for Disease Control and Prevention) that is medically accurate,” Golding said.

Although HB 1538 passed out of committee, it died on the House floor.

“In conversations that we’ve had with a lot of the legislatures, they said it really wasn’t anything so much geared towards the bill; just some other political views that got in the way,” Golding said.

Overall, Golding said they’re being positive and they’re already working on some of the minor tweaks needed for the next legislative session and hope to continue to expand resources to help provide a better quality of life for those living with HIV and AIDS.

Although the organization has raised about $12.5 million since its inception, budget cuts at the state and federal levels are taking a toll on the nonprofit sector.

“It’s still a fight to ensure that nobody falls through the cracks,” Shelton said. “That is one of our main focuses. There are also critical resources we try to protect for the nearly 6,000 Oklahomans living with AIDS.”

For now, the organization will continue the conversation, promoting HIV and AIDS education and awareness as well as support to those living their lives with the disease.

“Luckily, HIV is no longer a death sentence,” Shelton said. “People can lead productive lives for decades after they learn of their positive status; however, this has had an adverse effect in some instances to where people don’t think it’s a big deal.

“It’s created a laissez-faire attitude toward at-risk behaviors, so I think all of us should be aware and informed of what life with HIV can be like, and simply because it’s manageable doesn’t mean that life with HIV is easy.”

OACF holds its first Advocacy Leadership Council meeting Friday to determine how it will continue to move forward for the next legislative session.