Micah Andrews is all about cooperation. He’s working with several local businesses to make his restaurant a funky, local hangout. 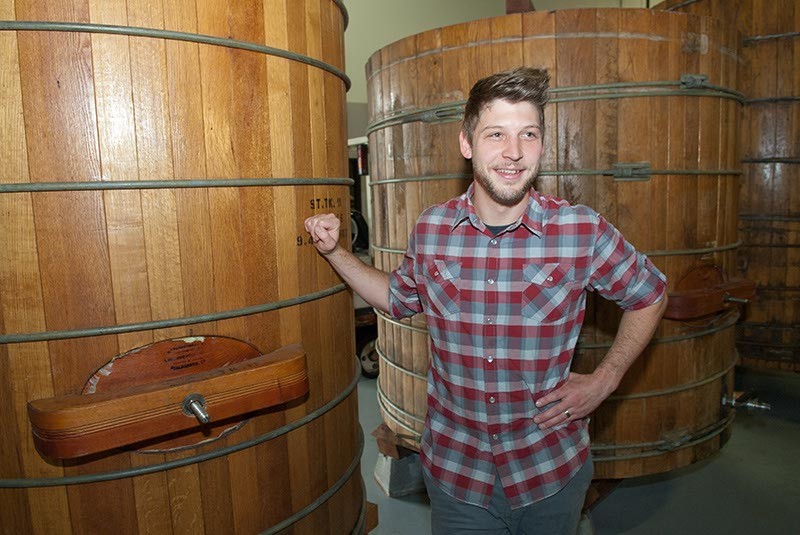 Micah Andrews is on a hunt for a door — not just a typical door that goes between rooms or on the front of a house. This one has to be special. It’s going to hang in his new restaurant, Oak & Ore, set to open this fall in The Plaza District, and it will get a lot of attention. He’s pretty sure he has found the right one. It’s at local furniture store Reclaimed Lumber Solutions, 400 S. Western Ave.

The door is massive. It’s an oxidized metal slab that used to be a sliding door entrance for cars and trucks in a Bricktown warehouse. Reclaimed Lumber Solutions, a furniture and raw material shop, is full of such stuff that’s getting a new life as decorative touches and functional pieces.

Andrews is all about cooperation. He’s working with several local businesses to make his restaurant a funky, local hangout.

It started with beer — craft beer, to be specific. Andrew’s interest in local craft beer led to experimentation with home brewing. In honing his craft, he met a few other local brewers and got to talking. They dispelled a notion that a lot of people have about people who make beer.

“One thing I don’t think a lot of people know is that craft brewers are very cooperative,” he said. “Their main competition is Coors and Budweiser, so they work together on a lot of things. I would like people to know that it’s a lot more of a community than you might think; there’s a lot less competition.”

He said that it is precisely this spirit that prompted local Roughtail Brewing Company to market its anniversary beer on its website.

It is also what drives his vision for Oak & Ore.

He has talked with a lot of local microbreweries. His plan for Oak & Ore is a casual, full-service bar and restaurant that focuses on local craft spirits, especially beer. The name Oak & Ore is a nod to the two components of a beer barrel.

Andrews pointed at a piece of ornate stamped tin and explained that it will have a place near the bar as an accent. He pointed at another pile of thick, sturdy planks of wood and said the pile came from a warehouse in Chicago.

Andrews plans to use it for the floor of Oak & Ore, and he explained that it was particularly fitting; a trip to Chicago with his brother was what prompted his journey exploring craft beers and brewing.

“It’s nice to incorporate a little nod to that trip to Chicago in the finished place; [it] brings it full circle,” he said.

Andrews is now putting the finishing touches to his restaurant. He’s working with the builders to maintain some of the key elements of the original building. However, the façade of the building at 1732 NW 16th St. will start to look markedly different in the coming weeks. He’s also working to nail down his menu and the beers, wines and spirits that will be available. The menu will include knife-and-fork sandwiches and items that suit a variety of tastes and dietary needs, including gluten-free items.

Micah Andrews’ Oak & Ore will be a celebration of local businesses and craftsmanship.