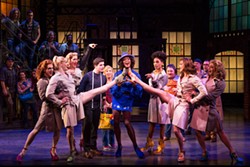 A story about a man and his unlikely friendship with a drag queen as they pull themselves up from their fabulous bootstraps to earn a living steps into Civic Center Music Hall, 201 N. Walker Ave., on Tuesday for a six-day, eight-performance run.

Kinky Boots is a musical about a man named Charlie who owns a shoe factory he inherited from his father. As the business fails, Charlie scrambles to find ways to stay afloat. He strikes a partnership with cabaret performer Lola. While devising a strategy to produce high-heeled boots, they realize they have more in common than they thought.

The musical is based on the true story of a British man named Steve Pateman who saved his shoe business by creating a line of male fetish boots named Divine Footwear.

The story was picked up in 1999 by the BBC documentary series Trouble at the Top. It inspired the 2005 movie Kinky Boots, which inspired the musical.

After its 2013 debut, the Broadway musical was nominated for 13 Tony Awards, winning six. Kinky Boots songwriter Cyndi Lauper earned a prize for best original score, Jerry Mitchell won for best choreography and Billy Porter received a nod for best performance by a leading actor in a musical. The show also earned the coveted best musical award.

The production is currently touring the United States.

One star of the touring musical is actor Jim J. Bullock, age 60, whose presence in the entertainment industry spans four decades. He built his early career with roles in the sitcom Too Close For Comfort and the film comedy Spaceballs, as well as with a “square” on game show Hollywood Squares and a co-host slot with Tammy Faye Messner on the Jim J. and Tammy Faye Show. He has since performed in plays, musicals, films and television shows.

In Kinky Boots, Bullock plays the part of George.

“I am the foreman of the boot factory. … It’s a nice, even, steady role. I have a lot of stage time and not a lot of dialogue, which I’m very grateful for,” Bullock said.

Bullock grew up in Texas but was born in Wyoming. After high school, he attended Oklahoma Baptist University (OBU) in Shawnee on a music scholarship.

“I was going to be a singer, but I got cast in a production at OBU that put me in the theater for the majority of time I was there,” he said.

He was working in a school production when he realized what he wanted to do with his career.

“I definitely remember Godspell. My parent’s didn’t pay for OBU; they paid for Godspell,” he said of his experience in the musical. “I went, ‘You know what? This is something I want to pursue.’ It was calling to me. I went after it. It was at OBU where I said, ‘I want to be a special actor.’”

After two years, Bullock left for Los Angeles. Though he did not earn a degree, he said OBU provided him what he needed for his future.

“I got the encouragement at OBU from teachers, from professors,” Bullock said.

Once in LA, the young man from rural America confronted culture shock.

“It was like the world opening up for me. I had never been exposed to culture, different faiths and different types of people,” he said. “Every day was exciting and different.”

Outside of his time at OBU, Bullock acted in off-Broadway productions in the early 2000s, but he is best known for his 2005 portrayal of Edna Turnblad in Music Theatre West’s production of Hairspray. The tour stopped in Oklahoma City and Tulsa.

Bullock said what makes this particular production of Kinky Boots special is the camaraderie of the cast.

“They’re a great group of people,” he said. “Like it or not, you’re a family when you are out on the road like this. I’m very proud of our company. We’re very fortunate there’s no divas, not a lot of attitudes flying around. I’ve been in those experiences, and it makes it so not pleasant.”

He is also pleased with the societal ideas Kinky Boots weaves into its story.

“It’s really got a great message,” Bullock said, “one that I am really proud to be a part of. We’re traveling around and giving this message that we need to love each other and accept each other for what we are.”

Note: Recommended for ages 12 and older