Keith Richards as the personification of death, icons from tarot cards, alchemical rules, travelers, harlequins and more intermingle in the fantastical world of Michael Pearce’s larger-than-life oil paintings. Often set in mythic landscapes of craggy mountaintops or impassable bodies of water, Pearce’s works tie together an incredibly rich group of symbols and stories in an exploration of the universal truths of human existence.

Pearce’s works, collected in the exhibition The Secret Paintings, comes to Oklahoma City on a tour of the Southern states. With support from Rosemary & Co, which makes brushes, and Michael Harding paint, the exhibition will also travel to Alabama, Florida and Texas.

The Secret Paintings will be on display at Oklahoma City University’s (OCU) Nona Jean Hulsey Gallery through Oct. 20. The gallery is located in Norick Art Center, 1609 NW 26th St., on OCU’s campus.

Composed of 26 massive oil paintings ranging in size from 4 to 12 feet high, The Secret Paintings traverses both familiar and unfamiliar territory for representational paintings.

With a background in oil painting, set design and writing, Pearce is a well-known practitioner and champion of representational art. He founded The Representational Art Conferences (TRAC) held annually at California Lutheran University, where he is a professor. The conference offers a platform for research and discussion about representational art in the 21st century.

“Representational work at the moment is really vital and really alive,” Pearce said.

He believes the art world is moving away from abstraction, which reigned supreme for much of the 20th century.

For Pearce, one of the draws of representation is that it allows viewers to connect to artwork easily.

“It really goes a long way to drawing you into a world,” he said, “and that’s the pleasure of a painting.”

Pearce’s traditional techniques were a great fit for the ethos of OCU’s School of Visual Arts.

“We give our students a lot of the more traditional foundational skills,” said director Holly Moye. “Then we also incorporate those into things like installation art and new media.”

The school plans to take advantage of the exhibition and Pearce’s presence on campus. He will give an artist talk and teach a class on representational painting while the exhibit is on display. 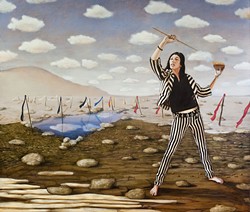 At first glance, the paintings’ style and much of their subject matter recalls the grandeur of the old masters, but The Secret Paintings is anything but historicism.

Pearce engages wholeheartedly with contemporary themes, drawing from a well of pop culture — figures wear jeans and T-shirts and play on their cellphones, characters inspired by David Bowie and Marilyn Manson make appearances and Harry Potter even figures into the mix.

Refreshingly, the works also break free-from archetypical depictions of women in favor of a more empowering stance, with strong female figures throughout the exhibition symbolizing justice, mercy and wisdom.

He approaches his work by finding “themes that seem like they’re eternal truths and paint[ing] them with images that are past and present.”

Drawing from such diverse sources as the imagery of tarot cards, the history of alchemy and contemporary pop culture, he pieces together historical and modern sources to explore timeless themes such as love, justice and the afterlife.

Pearce’s long-standing interest in the iconography of tarot is a consistent theme. Although it is now most closely associated with fortune-telling, many of its symbols originate from European emblem books dating back to the 16th and 17th centuries, which featured allegorical images that offered moral instruction.

“Sometimes the imagery can seem very weird and esoteric,” Pearce said. “But actually, generally speaking, it’s rather instructive and designed to help you get through life.”

Even though the exhibit recalls the ethical teachings of emblem books, Pearce’s works offer many more possibilities than just one moral dictum. Rather, the works have many levels of meaning and invite close observation and personal reflection.

Each painting is embedded with several layers of meaning ranging from theology and alchemy to the artist’s personal history, which viewers can understand or interpret in different ways.

Coupled with their size, the complex imagery in the works of The Secret Paintings leads viewers to look closely on a journey of reflection and interpretation.

Although the title of the exhibition might suggest that Pearce’s paintings are hard to interpret, the “secrets” in the paintings are hiding in plain sight.

“If you look closer you’ll start noticing things about them that might lead you to other explanations and other meanings, deeper meanings,” Pearce said.