It was originally a one-off exhibit, but as Walsh and Pendley saw how well the collaborative sessions between artists were going and received positive feedback from participating students, they began to see it as something more.

“At that point, I started thinking, ‘This should happen again,’” Walsh said.

Symbiotic moves from OU to Oklahoma City University for its latest installment. This is the first show in the series to take place outside Norman.

With founding curator Pendley busy with graduate school, Walsh handled curating duties solo for this show. In some past Symbiotic exhibits, Walsh and Pendley worked to create their own art as well, but the extra work became cumbersome. This year, Walsh is consolidating her efforts.

The first Symbiotic show was born out of a call for proposals by OU’s Lightwell Gallery. Walsh and Pendley had already been talking about doing a show together before they saw the call and submitted their own proposal.

“Because we were wanting to collaborate,” Walsh said, “it made sense to do a show on collaborations.”

Walsh said she knew this kind of show was something that would interest college-student artists.

“[While attending school,] I felt really separate from the Oklahoma City arts scene,” she said. “I knew if I was feeling that way, the other students were as well.”

Symbiotic is a good way for young artists to get their foot in the door and establish relationships in the art community that will be beneficial to them after graduation.

Walsh, who was also named associate director at Oklahoma Visual Arts Coalition (OVAC) in 2017, first began attending OU after high school. She studied film but got burned out on college after a few years and put school on hold.

In 2013, she made the decision to return to school and finish her degree. This time around, she put all her focus on her new passion: ceramics.

“I fell in love to where I wanted to do that all the time,” she said.

Walsh currently maintains Paseo Arts District’s Walsh Pottery with fellow artist and husband Timothy Walsh. She said one of her greatest passions is working with other artists curating Symbiotic and other shows.

“Curating is fun to do,” she said. “It’s endlessly interesting.” 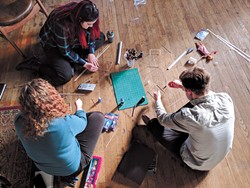 Walsh is looking for more ways to make Symbiotic interactive. The new exhibit opening will include a mural wall on which community members can write.

On Saturday, Brown hosts a free (and currently full) papier-mâché workshop that is open to the public. As part of Symbiotic, Brown and her team made a papier-mâché dress that lights up when a button is pushed. Walsh said in the future, she would like more, if not all, participating artists to hold free workshops.

When Symbiotic finishes its OCU run, the artwork will make its way to Fowler Volkswagen of Norman, one of the exhibit’s main sponsors. This is the first time Symbiotic has sent its work to Fowler, and it will likely be the first time many future customers have ever seen an elaborate local art installation at a car dealership.

When people talk about Symbiotic, they often mention how greatly it benefits the student artists involved. But Walsh thinks the community artists have multiple things to gain from the experience as well.

Working with younger artists keeps the established on their toes. As student artists benefit from exposure to the larger art community, current members of that community benefit from outside perspectives.

“I think any time you’re working with a young artist, you’re getting inspired,” she said. “You’re finding out about new things, whether it’s cultural or sometimes even art stuff.”