The event is 6-9 p.m. July 27 at The Skirvin Hilton Oklahoma City, 1 Park Ave. Attendance is capped at 250 guests, and tickets are $125. Each of five Oklahoma City chefs creates one course of a five-course meal. Each chef also is paired with a ProStart student who will spend the day cooking alongside their mentors.

“The students get the opportunity to just work all day,” she said. “But also, a lot of times, several of the students have been at the chef’s restaurant before the event, shadowing them and just getting to know them.”

Mark Vannasdall is the lead coordinating chef of this year’s event and vice president of culinary operations at Traditions Spirits.

Competition is fierce among chefs vying for a spot on Odyssey’s menu each year.

“There’s quite a waiting list — they all want to be in this event because it’s a lot of fun,” Rice said. “So it’s kind of a process, but there are a lot of chefs that throw their name in the hat.”

The chefs’ willingness to promote the event and ability to work with high school students are important factors in the selection process.

“[Vannasdall] chooses. And there’s a lot of competition in that we want the chefs to market it, so he’s like, ‘Are you going to promote this on social media? Are you going to help market the program?’” Rice said. “I have some say in it because I want chefs to be involved in Odyssey that are involved in the program. They want to mentor students and care about kids.”

This year’s OKC event chefs are Patrick Clark II from The Red Cup; Jonas Favela from The Meat Market Refectory; Theron Jessop from The Artesian Hotel, Casino & Spa in Sulphur; Aaron Miles from The Skirvin Hilton; and Michael Paske from Boulevard Steakhouse. 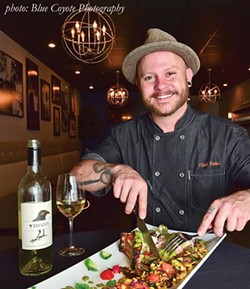 OKC’s theme — regional rivalry — allows for creativity in the kitchen.

“They take, like, Texas and California and make a dish that’s a fusion of two states,” Rice said.

Clark II, owner and head chef of The Red Cup, began his career in ProStart and is now an Odyssey chef. 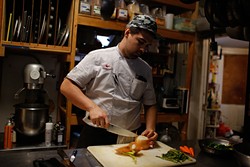 “He’s actually doing dessert, and he’s doing really cool stuff with pickled fruits and things like that,” Rice said. “But he was a ProStart student … so he’s a success story.”