OETA celebrates 60 years on air as it faces new challenges 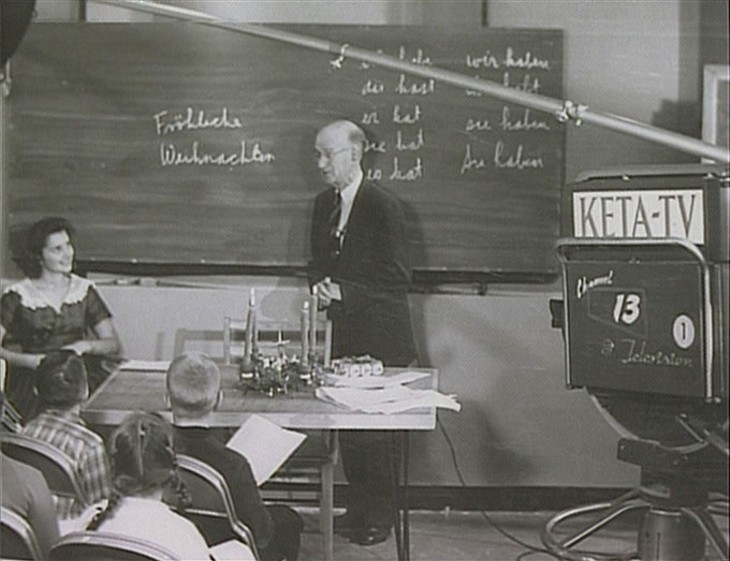 When Oklahoma Educational Television Authority (OETA) went on the air in 1956, it was only the 20th public television station in the United States.

It broadcast 20 hours of programming daily during its first 14 years of existence. In the years before satellite and cable television, when commercial signals did not reach many of the rural areas of Oklahoma, OETA did.

“For those viewers, it was literally their window to the world,” said Bob Allen, who served as OETA executive director from 1972 to 1998.

Last week, the state network celebrated its 60th anniversary as Oklahomans’ window to not only the world, but to the state in which they live.

After Gov. Johnston Murray signed the bill that created OETA in 1953, it took three years for the first station, Oklahoma City’s KETA, to start broadcasting from a University of Oklahoma (OU) classroom. Allen said the delay was due to the fact that OETA was an unfunded mandate: The Legislature failed to appropriate operating funds.

“In fact, it was E.K. Gaylord who made it possible for OETA to begin broadcasting,” he said.

The publisher of The Oklahoman donated $150,000 so it could begin operating. Prior to the establishment of the Corporation for Public Broadcasting and Public Broadcasting Service (PBS) in 1967, much of OETA’s programming was comprised of what Allen described as “talking heads,” or professors offering video lectures from their classrooms.

Through cooperation with the Oklahoma Department of Education, OETA provided college credit classes on the air for people who otherwise were unable to attend in person.

It became one of the first networks to sign on with PBS, expanding its weekly programming and providing Oklahomans with Sesame Street, The Electric Company, Mister Rogers’ Neighborhood and Masterpiece Theatre.

OETA steadily built throughout the 1970s, moving its studios from OU to Oklahoma City in 1974 and began producing original programming.

In the 1980s, Allen and his new station manager and program director Bill Thrash launched several ambitious programming initiatives, beginning with the 1987 acquisition of The Lawrence Welk Show, which OETA syndicated to other PBS affiliates and has earned a reported $45 million in donations for those stations.

But a miniseries about Oklahoma’s history ushered in OETA’s most fertile era of in-house production. Allen characterized Oklahoma Passage, a five-part saga that followed a fictional family from its roots in 1840s Georgia through the 1980s, as a “watershed moment for OETA.”

“Bob Allen had this idea about Oklahoma Passage,” said theater director and University of Central Oklahoma professor Billie Thrash, Bill Thrash’s widow. “He needed somebody to produce it, and of course Bill had this long resume of producing, so Bob asked him to come onboard and do it.”

Unfortunately, OETA suffered dramatic budget cuts in the 2010s. In 2009, it received $5,194,383 in state funds, but following a 9 percent cut in 2011, the network was forced to reduce its production budget. It converted ONR to a weekly program and reduced the episode frequency for shows like Gallery. Today, it operates with 45 percent fewer state funds than it did in 2009, receiving only $2,838,163 for fiscal year 2017.

“I don’t think people always understand that not everyone lives in a major metropolitan area where they can get hundreds of channels,” Billie Thrash said. “That’s why the Oklahoma News Report was so important.”

However, OETA interim executive director Mark Norman said the network is pushing forward under challenging circumstances and its digital initiatives are keeping pace with current trends.

“The conversion to digital was expensive, but it was worth the effort,” Norman said. “Channels like OETA Kids reach a large audience, and I know a lot of people who constantly watch the documentaries and programming on OETA Oklahoma. Everyone talks about viewing on phones and digital devices, but we are also seeing a lot of cord-cutters discovering our over-the-air channels. Some viewers are even discovering that they get more of OETA when they cut the cord than they did before.”

“That was literally the pitch,” Crino said. “PBS’ education programming for pre-school and elementary school age children is extensive, but it drops off a little with middle school kids. … It just made sense.”

Despite the cuts, Billie Thrash still believes in OETA’s future. She said the state should recognize that cable stations often do not offer high-quality educational programming. With formerly education-minded networks like History filled with Pawn Stars, American Pickers and Ozzy and Jack’s World Detour, Thrash said OETA’s mission is just as important as it was 60 years ago.

“Is there a market for educational programming? You bet,” she said. “Whenever Ken Burns does something, it’s a huge hit. People are hungry for it, and it means something.”