The Paseo Arts District has long been a hub of art and creativity in Oklahoma City, and now a group of writers and performers are setting out on a new entertainment venture to showcase local talent.

The Literati Variety Show will be staged 7 p.m. Friday in The Paseo Plunge, 3010 Paseo St., and will feature a unique mix of storytellers.

“Because they really are kind of boring on the whole,” Martin said. “It’s the kind of thing that you go to because you’re socially obligated to go, versus, ‘Oh, this sounds like so much fun!’ So we had talked about various ways to make them more approachable and more fun, more of an event.”

“We were on parallel paths for the same thing, essentially,” Kovash said, referring to his hopes for the literary community. “I come from a performance storytelling background, so the way I used to write before I got into the [Oklahoma City University Red Earth MFA] program was for performance.”

Martin said the major goals of the show are bringing words to life off the page, engaging audiences in new ways and building a community and readership. He imagines the gatherings will be similar to the literary salons of old.

“There are a lot of good writers in Oklahoma,” Martin said. “And the literary community can’t grow unless we can convince Oklahomans to start reading us. So this is one of the ways that we’re trying to do that.”

Kovash agreed and said he hopes to create a new artistic family.

“Things are starting to coalesce in terms of Oklahoma writers,” he said. “And so I think what Charles is doing here is perfect timing.” 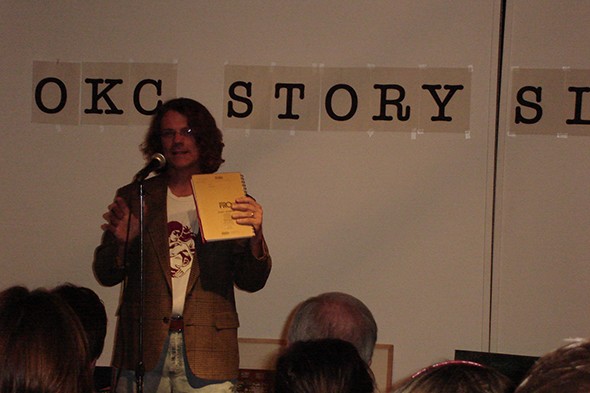 The show is slated to begin with a performance from an Oklahoma City StorySLAM champion. StorySLAM is a monthly event at 51st Street Speakeasy in which participants take the stage to tell themed stories. The event draws professionals and improvisers alike.

Kovash, a regular StorySLAM participant, said he’ll be the featured storyteller for the first variety show and will tell a 15-minute story. For future shows, they will consider several past StorySLAM winners.

The show will also include a stand-up comedian chosen from the Public Access Open Mic that Martin holds in The Plunge every week. The first “comedian of note” will be local performer Alex Sanchez, who also hosts Public Access and will perform a 15-minute set.

Martin said they are asking performers to do longer sets so they have an opportunity to step outside the traditional limitation of roughly five minutes. And for comedians, it’s a move closer to true stand-up.

“We’re challenging people to develop their story and be able to maintain that entertainment level,” Martin said.

They expect to feature strong, exemplary performers who can tackle the time limit with ease.

“In front of the mic, if you don’t have some experience, those are like dog minutes,” Kovash said. “A three-minute thing seems like you’re up there for half an hour.”

Grace will also do a performance reading from her collection of poetry, After I Became a Tree. Martin said Grace’s writing is deeply rooted in Oklahoma, her relationships and a “fiery feminist” viewpoint.

Martin said that for the reading part of the show, performance art elements must be incorporated. He believes this engages the audience’s interest in new and different ways and inspires viewers to follow a reader to different events.

“We just don’t want somebody at a podium, no matter how good their work is,” he said.

The “sit-down conversation” aspect of the variety show will bring in journalists, activists and other community members who might not be considered “traditional” storytellers, Martin said.

For the first show, the guest will be city council candidate JoBeth Hamon. Martin said her work with current community issues will likely be a focus of their discussion.

The show will finish with a music and book “pairing,” in this case music from Guthrie folk band Stranded at the Station paired with the 1992 novel The Brothers K by David Duncan.

Grace chose the book and music pairing, and during the show, she will discuss how the book’s themes and the band’s songwriting mirror each other.

“She’ll produce images for the audience, and then the band will bring them to life,” Kovash said.

For future iterations of the show, Martin and Kovash are discussing a possible partnership with University of Central Oklahoma to help target local bands and books.

All performers will be paid, and Martin said they hope to secure sponsors in the future. Even bigger plans include potentially recording and broadcasting the variety show on television.

“All the decisions that we’re making from this point forward are going to be about, ‘How can we make sure that the audience has a great time?’” Martin said. “And [that] they are on fire for the possibility of storytelling in Oklahoma City.”

The show will be staged on the Holey Rollers patio, weather permitting. For now, it will be held quarterly, but Martin and Kovash said they are open to letting it grow and perhaps holding more frequent shows.

“The beautiful thing about Oklahoma right now is we are so hungry for ideas,” Martin said. “And there may not be a lot of money, but there is so much enthusiasm.”

“I’ll put an economic spin on it, too,” Kovash said. “There’s hunger for ideas, and there’s pent-up demand, but there’s also a supply that’s pent-up. So maybe if we can get those people together, it’s going to explode.”

Admission is free, and all ages are welcome.