The Manhattan OKC executes Rococo favorites but struggles when venturing outside familiar territory.

The Manhattan OKC, Rinehart’s newest restaurant, opened at 210 Park Ave., Suite 150, in a prominent corner of Oklahoma Tower about a year ago. Its large windowed walls overlook the “Raven and the Apple” sculpture that was moved to its current location in the courtyard in 2016 from a small downtown park on Robinson Avenue.

The nearby raven has been incorporated into the Manhattan logo, which takes its name after the 14 varieties of the Manhattan cocktail on its menu. Rinehart has turned daily cooking duties over to chef de cuisine Disty Simpson, and the duo devises daily dinner specials in addition to a few fixed items, including a few Rococo favorites. 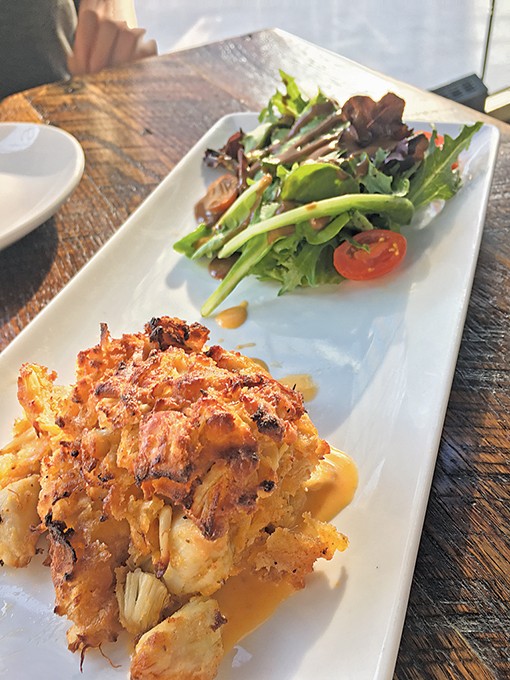 “When we started The Manhattan, the idea was that we weren’t going to do anything Rococo,” Rinehart said. “During construction, it was like, ‘Can we get a crabcake? Can we get a Love Salad?’ I’m going to give the guests what they want.”

The crabcake and Love Salad are joined by blue cheese cookies and a smoked salmon appetizer on the menu. The cozy restaurant seats about 10 at the bar, 48 at tabletop locations and about 20 on the patio, which Rinehart said is set for expansion this year.

It’s a small space, but it is warm and inviting. I quite enjoyed the tables made with reclaimed Kentucky barn wood, but the small space has logistic concerns for the back-of-the-house staff.

“We have hardly any kitchen, so we’re making magic with the food we are doing,” Rinehart said.

To expedite meals in a small space, Rinehart installed a powerful oven that allows the crabcakes to be baked with a slightly charred topping in about two minutes. Long before Rinehart moved to Oklahoma, he was the culinary director at Legal Sea Foods, one of the nation’s most revered seafood restaurant chains. Legal Sea Foods’ clam chowder has been served at every White House inauguration since Ronald Reagan’s first term. Rinehart helped open Legal Sea Food locations in Baltimore and Washington, D.C.

“In the ’90s, I helped [Legal Sea Food] redo their old style of a crabcake, so when I came to Oklahoma and saw what everyone was serving, I said ‘I will take it one step further.’ The Rococo crabcake is legendary from coast to coast,” Rinehart said.  “People that live in Baltimore will come [to Oklahoma City] just for that.”

I started my Manhattan experience with the crabcake, which is plenty big enough for two people, to see how it compares to the Rococo classic and was very pleased. I had no issue paying market price ($21) for the modern take on the classic dish. Served almost as a deconstructed crabcake, the filling is loosely bound together between large servings of fresh crab.

Far too often, I’ve eaten a crabcake and wondered where the crab was located between breadcrumbs and Dijon mustard. I really enjoyed the contrast in textures developed from the crispy topping and the softer bottom that was complemented by a spicy rémoulade.

When it came to the rest of my meal, I had trouble making a decision. The dinner menu that evening was largely new American, but nothing that I would consider particularly comforting or inventive. There was a pan-roasted filet ($34) with whole mushrooms and red wine demi-glace with wilted spinach and roasted potatoes, “Lazy-man’s” lobster ($30) with hand-picked lobster sautéed in butter and served with seasonal vegetables, roasted pork tenderloin with a horseradish and panko crust ($22) and penne pasta with chicken breast and grape tomatoes in a white wine and butter sauce ($18).

I ordered off the specials board and went with pork tenderloin medallions covered in an apple cider glaze and served with rice and honey-glazed roasted carrots ($24), and my dining partner ordered Cajun blackened scallops to be served with a side of pasta ($15, plus $5 for the pasta).

The scallops arrived without the pasta and were a sign of service to come. They were fresh and well cooked, tender in the middle, and the Cajun seasonings didn’t overpower the natural scallop sweetness, but the accompanying spinach was still bitter and couldn’t be eaten with the mollusk. The side of pasta arrived the same time as my pork.

The pork medallions were pretty much inedible. I made it a few bites before tapping out on the overcooked tenderloin. The apple puree was cloying, and the tenderloin was far too tough.

“What happened to your pork — and I knew it as soon as you said it — is that they put it in that oven, and they’re not supposed to,” Rinehart said. “Now I can go back to the staff and reiterate some things.”

It turns out that I caught the restaurant on a bad night. There was only one server for the entire restaurant, and Rinehart said Simpson was off for the evening.

“Monday is my one night, sadly, when I’m a little exposed due to personnel,” he said. “It was my understanding that they were stretched and not ready to have the level of business they had.”

Even the best restaurants in the world have bad days. After talking to Rinehart, I’d be more than willing to give The Manhattan OKC more chances. Its lunch specials are priced well, and the house-cured pastrami is made with a 10-day process that sounds tempting for the next time I’m downtown around lunchtime.

What works: The crabcake lives up to its Rococo legacy.

What needs work:Staff was overwhelmed on a Monday.