Officials step their game with their approval of PlanOKC

Is it okay for your neighbor to move a couple of braying donkeys into the backyard of his 50-foot lot next door to you in the middle of the city?

A host of codes come into play in that scenario if it were to take place in OKC. Cities pass codes to make it easier for people to live in close proximity to each other.

The circumstance would be different if you lived on 160 acres in the country and your neighbor did the same thing. There is space and distance from your house. There might be trees and a fence to block the sound, smell and view.

But city life involves more coordination than might be recognized.

Aubrey Hammontree, planning director of Oklahoma City, talked to Oklahoma Gazette about the new comprehensive plan for the city.

“[PlanOKC is] really looking at revitalization on the assets that we have, strengthening our neighborhoods and communities and building smarter, better in the future as we go forward,” Hammontree said.

Over the last seven years, she has been in charge of developing the framework for guiding the development of infrastructure and compatible communities within OKC. Now, PlanOKC is available to the public and anyone who is thinking about launching any new development.

Hammontree pointed out that a key part of developing the plan was using more than 8,000 survey instruments to gain input from over 22,500 residents of OKC.

She said that technology of digital interaction with residents and going out into neighborhoods made heavy contributions to the process of developing PlanOKC.

At the Oklahoma City Council meeting on July 21, Hammontree announced the new website that will help interested citizens and developers better understand how the city can grow in ways that will allow mixed-use development that is compatible with the neighborhood and the city to occur.

Anyone can go to planokc.org and explore the new plan.

The planning department encourages anyone with an idea for development to start with the tools on the website that will allow anticipation of what the city will expect of them for a particular location.

Hammontree said that in the past, developers had to try to understand “vague land use designations” and then develop a plan. But too often, once they would approach the city for approval, they were told to go back and adjust their plan.

She said that the advantage of this new plan might be less time and money spent just trying to guess what is expected on a larger scale.

The payoff for all residents of Oklahoma City will be even greater.

PlanOKC calls for development to follow certain land “typologies” — grouping of similarities — that guide development and the building of infrastructure to support it so that there is a well-organized grouping of businesses and living areas that help sustain each other.

The use of typologies instead of just areas of land-use designations is that mixed-use “retail nodes and corridors” can complement each other and the surrounding residential neighborhoods.

A considerable amount of time has been spent on the plan identifying future needs for infrastructure.

Sewer, water, streets, fire, parks, sidewalks and trails are all considered in the assessment process for deciding what needs improvement.

Once those assessments are made, the prioritization of investments will be made by determining the highest need, existing levels of service, greatest effect of potential projects and physical constraints. 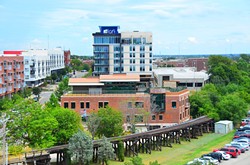 Hammontree used the term “chasing of development” to characterize the way that OKC has found itself doing planning in the past, and PlanOKC is intended to turn that process around.

At the end of Hammontree’s presentation to the city council, Ward 6 Councilwoman Meg Salyer complimented the whole planning department on the important new tool that had been developed.

“I just want you to know that I used this just last night with a neighborhood issue and was able to go to page 50 and look at the land use plan,” Salyer said. “It really is going to be helpful for us just talking to our neighbors with issues that they have going forward.”

Print headline: City construction, Officials step their game with their approval of PlanOKC.