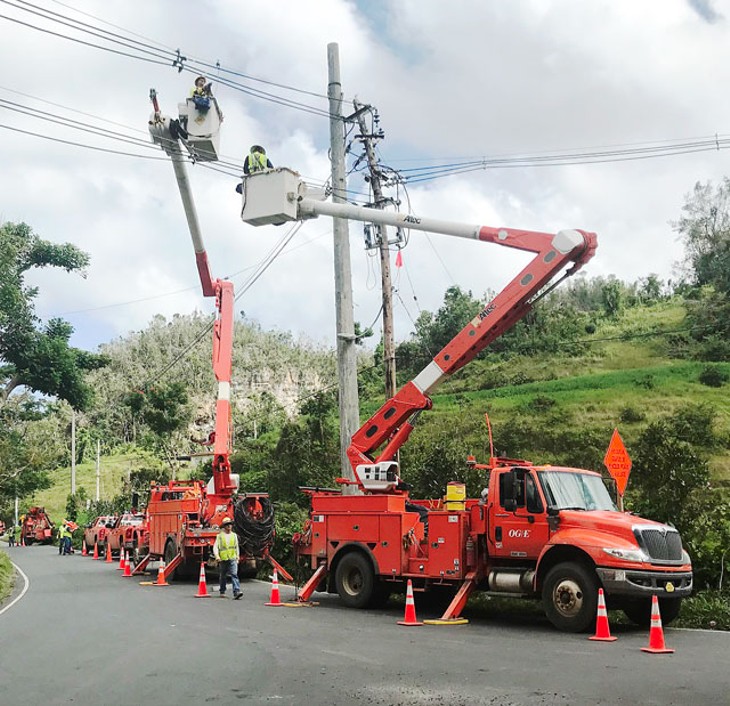 In recent months, short videos posted to social media sites shared the surge of excitement felt by Puerto Ricans as power was restored to their homes, schools and communities for the first time since September.

In schools, teachers erupted in cheers and students jumped up and down when the lights came on. In the streets, local residents gathered around electric power poles to applaud as linemen completed work on lines that had previously lain broken after the passage of Hurricane Maria.

Rick Berg and Terry Garrett witnessed the joy firsthand as two of OG&E’s 125 employees who assisted in the repair and restoration of a portion of the power grid in Puerto Rico. A Category 4 storm hit the island, which was already recovering from Hurricane Irma’s impact weeks before, in late September. Regarded as the worst natural disaster on record for the area, Hurricane Maria caused an estimated $95 billion in damage, created a large-scale power outage and killed dozens of people.

In January, OG&E’s first crew of linemen arrived at a northern coastal municipality where buildings were still in tatters and tangles of electric lines and utility poles laid dormant. When crews drove their bright orange trucks in, Berg spotted a homemade sign that simply read, “123.” The residents had been without power for 123 days, he said.

“There were horns honking and people out in the streets, celebrating. I even heard a few firecrackers going off, which scares linemen. They wonder if it’s a blown fuse,” Berg said. “They were very excited, just beating pots and pans. They were also very appreciative that we came from Oklahoma over to their island.”

While OG&E crews have performed power restoration work in communities ravaged by storms in the past, the Puerto Rico mission was unlike the others, they said. That’s largely because of the people. Families opened their homes to the linemen so they had somewhere to sleep; women delivered food dishes to be enjoyed during breaks; children passed out crayon drawings depicting the OG&E trucks; local dignitaries penned proclamations and presented plaques at town celebrations.

“I’ve been doing this for a long time,” Garrett said. “There are things you see and experience through storms. People are always appreciative. This was completely different. It was truly amazing. You can just look at the comments on [OG&E’s] Facebook