. There are thousands of comments, and they are mostly from Puerto Rico.” 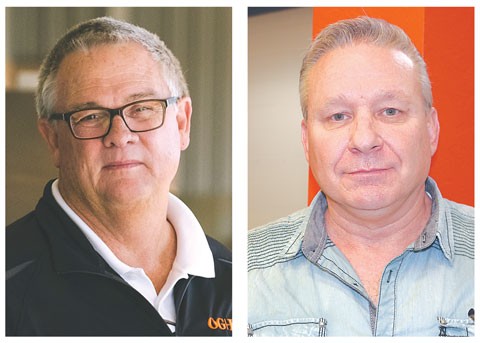 In late October, the leader of Puerto Rico Electric Power Authority (PREPA) sent a letter to utility industry trade groups requesting assistance from U.S. mainland utilities. It was the first time PREPA had requested help from the utilities. In the days after Hurricane Maria, the company turned to a small Montana-based contractor, Whitefish Energy Holdings, for grid restoration. The no-bid contract was later canceled amid criticism from federal leaders.

Washington, D.C.-based Edison Electric Institute, an association representing private, investor-owned utilities including OG&E, was one of the trade groups to respond, pledging its members’ services.

“Out of all the utility companies in the United States, 19 stepped up,” Berg said. “Our company was one of them. To me, that is pretty neat. We are not a big company. We are in Oklahoma with 2,400 employees, but some of these other utilities have 24,000 employees.”

After a month of planning, 50 OG&E trucks were loaded onto a barge at Lake Charles, Louisiana, and routed to Puerto Rico. An OG&E team headed to the island. There, they prepared to unload the vehicles and equipment, coordinate crew lodging and secure staging areas. Back in Oklahoma City, volunteer linemen and support staff prepared to mobilize.

On Jan. 20, the first OG&E linemen crew arrived for a 20-day mission. Assigned to the Arecibo region of Puerto Rico, OG&E crews worked alongside Dallas-based Oncor and Houston-based CenterPoint Energy. On Feb. 8, the second wave of 50 linemen traveled to Puerto Rico, returning to Oklahoma in early March. Last week, only one OG&E employee remained on the island, where electricity had been restored to nearly 90 percent of customers, said Gayle Berry, OG&E spokeswoman.

Efforts to restore power to the people of the Arecibo region were no different from the work linemen do in Oklahoma, both Berg and Garrett said.

The work was challenging, mostly because of the unfamiliar terrain, especially for the second crew of Oklahoma linemen assigned to a mountainous area. OG&E trucks had to navigate narrow roads. Upon reaching their destination, linemen trudged through thick jungle vegetation to find downed power transmission lines and begin their work. Each lineman was given a machete.

There was an advantage to working in the mountains, Garrett said. Each mountain community was home to a school.

“They take a lot of pride in their schools,” Garrett said. “The schools were open half-days. When we would get those schools on, it was amazing. Now, some of these buildings were 70 to 80 years old. When you turned the lights on, maybe of the eight lights in a classroom, one would work. When that one light would come on, those kids were tickled to death.”

Both Garrett and Berg applauded their crews for their hard work. Between the two of them, they brought 75 years of storm experience into the Puerto Rico mission.

“When our teams came home, we knew right here in our hearts that we had done good,” Berg said as he tapped his heart. “We go out on storms sometimes where you get back and you think that wasn’t a big deal — either it wasn’t much of a storm or there wasn’t a lot they would let you do. When you came back from Puerto Rico, you felt good. … We now have friends over there, and they now have friends over here.”