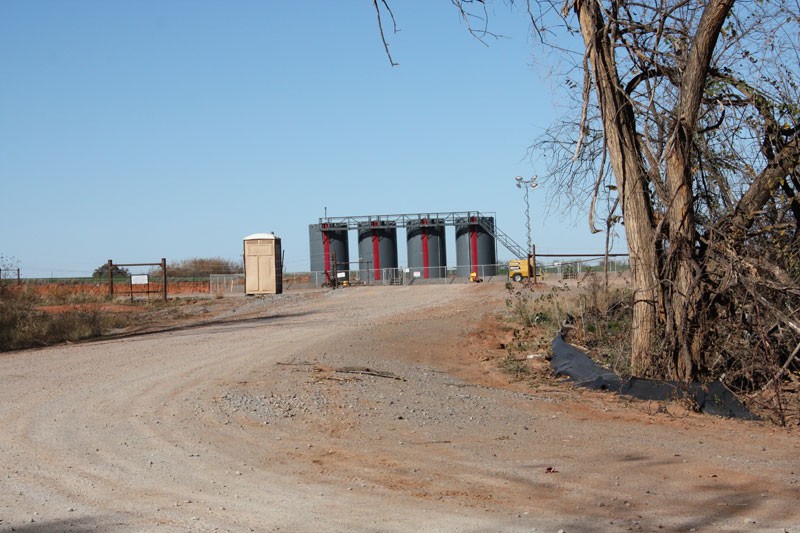 Lindsey and Gary Ball were just days away from being able to enjoy late spring Oklahoma weather beside their recently installed backyard swimming pool when the rumbling sound started just beyond their fence.

The couple assumed the noise was temporary. However, the loud screeches soon intensified and hinted at oil and gas activity near their quiet, sprawling far western Oklahoma City neighborhood.

Soon, the din from the round-the-clock drill site near the intersection of SW 29th Street and Cimarron Road rattled windows and neighbors, leaving some sleep-deprived.

“You couldn’t carry on a conversation in your own backyard,” Gary Ball said.

Neither the local and state governments nor the energy company provided any advance notice of the drilling to neighbors, the couple said.

During the summer and early fall, calls and complaints from Kyles Court addition residents flowed into Oklahoma City and Oklahoma Corporation Commission offices and the oil company, Citizen Energy of Tulsa. The day-and-night, high-level drone was the main complaint, and there also were concerns about increased tractor-trailer traffic. The neighbors, who said they aren’t against the oil and natural gas industry, asked about noise ordinances and wondered if there were nuisance violations regarding drilling throughout the night. Emails and phone calls prompted responses, but the drilling rig continued operating 24 hours a day. During two weeks in September, fracking produced a much louder noise from the pressure pumps, and the sound mimicked a jet engine.

Clashes between residents and drillers are becoming more common in places like Oklahoma City and other oil-rich areas. Driving west from the urban core, signs for new subdivisions pop up one after another. Open space, peace and quiet and proximity to Interstate 40 placed the area on the radar for home-buying families. For decades, the area’s multiple oil and natural gas-rich reservoirs have made them tempting targets for oil and gas companies.

Is it possible for residents and drillers to coexist, and what action is possible from state and local governments to address community concerns while continuing to meet driller needs?

Nearly two years ago, a two-page bill made a ruckus as it worked its way through the Oklahoma Capitol’s lawmaking process.

Senate Bill 809, authored by then-Senate President Pro Tempore Brian Bingman, R-Sapulpa, prevents towns, cities and counties from banning hydraulic fracking and other oil and gas activity within their boundaries. It passed on the heels of Denton, Texas, voters approving an antifracking ban within their city limits. At the time, Stillwater and Norman leaders also were revisiting oil and gas ordinances.

Supporters argued the bill reaffirmed the Oklahoma Corporation Commission as the statewide regulator of the oil and natural gas industry and provided it with uniform regulations, as opposed to varying ordinances in municipalities across the state. The bill earned plenty of opposition, including from the Oklahoma Municipal League, which represents the hundreds of state municipalities.

While the law was viewed as restricting local regulations, it did allow municipalities the authority to enact local rules regarding oil and gas activity nuisances.

“A municipality, county or other political subdivision may enact reasonable ordinances, rules and regulations concerning road use, traffic, noise and odors incidental to oil and gas operations within its boundaries,” reads Title 52, Section 137.1, of the Oklahoma Statutes.

Municipalities can establish “reasonable setbacks and fencing requirements for oil and gas well site locations” under the new law. In other parts of the United States, setbacks are used as buffer zones between drilling rigs and homes, businesses and schools to protect public health and safety.

For months, Kyles Court neighborhood residents endured noise and vibrations so fierce they attempted any remedy for its halt. Local governments, such as Oklahoma City, have previously sought local control of drilling. A number of ordinances remain in place addressing public safety in areas of well location, fencing and buffer zones from freshwater sources. Under municipal code, drillers should “eliminate as much as possible dust, noise, vibration or noxious odors, and shall be in accordance with the best available technology.”

Oklahoma City inspectors were twice sent to the area around the Citizen Energy well site for sound surveys. Each time, inspectors found no violations.

Neighbors like Lindsey Ball explained inspectors arrived during the downtime when less noise was produced.

Any citizen can lodge a nuisance complaint, regardless of oil and gas activity, said Ward 3 Councilman Larry McAtee. All complaints are investigated and violations are turned over to the city’s municipal court.

The Oklahoma Corporation Commission deals with any issues regarding drillers or their activities, he said.

“The exploration of oil and gas has been taken out of the city’s hands and is on the state level,” McAtee said.

Calls to the Oklahoma Corporation Commission came with no hope, as the state agency claimed no authority in regulating noise from the site.

“There is no state law regarding noise levels for oil and gas,” said Matt Skinner, Oklahoma Corporation Commission spokesman. “It is not an uncommon complaint that we get.”

When a drilling operation is located within a municipality, corporation officials recommend individuals contact their local government agencies about possible nuisance ordinance violations.

For rural residents, the only option is dialogue between drillers and neighbors, explained Skinner.

“We do explain that we don’t have any legal authority, but we would be happy to be the go-between with the operator to see if some kind of agreement can be reached,” Skinner said.

In the Kyles Court addition case, one neighbor called the oil operator, Citizen Energy, and asked that a sound wall be installed, but the company took no action.

Citizen Energy did not return Oklahoma Gazette’s request for comment on the well near the Kyles Court addition, nor did the company respond to questions about how it handles neighborhood complaints.

How close is too close?

In Oklahoma, builders are prohibited from placing residential or commercial structures within a 125-foot radius of an active well or within 50 feet from related surface equipment.

It’s a law with no reciprocal component, as there is no legal barrier prohibiting an energy company from drilling within 125 feet from a home, school or business.

Oklahoma is not alone in lack of setback restrictions for gas wells and buildings; however, two neighboring states do have laws limiting drilling near homes. In Texas, the required setback between a shale gas well and the nearest residence is 200 feet. In Colorado, it is 500 feet. Advocates of setback requirements say they protect the public from explosions and air and noise pollution.

This summer, state Rep. Steve Kouplen, a Democrat representing communities in Okfuskee, Hughes and Okmulgee counties, proposed an interim study to examine setback requirements for oil and gas and property owners near active oil and gas wells. Any changes to the state’s setback law would have to come from the Legislature.

Most of the noise created by the drillers was temporary, over a period of 120 days, for Kyles Court residents. Afterward, the workers, equipment and noise decreased drastically.

Now, the active well is relatively quiet and produces a low hum that can be heard in neighboring homes with windows and doors closed.

Could this happen again? Is it feasible for another drilling operation to set up near the neighborhood? Those questions loom large among neighbors.

In October, the neighbors learned of an application for a saltwater disposal well near intersection of NW 10th Street and N. Cimarron Road. The application is pending before the Oklahoma Corporation Commission.

“The worst is over,” Gary Ball said, “but we don’t know enough about the process to know what’s next.”

Print headline: Drilling issues, One neighborhood’s experience with nearby drilling showcases cracks in a state law.