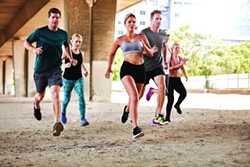 Beginning in front of The Patriarch at 9 E. Edwards St., participants will run, jog or walk the 3-mile fun run stretched across downtown Edmond, receiving complimentary beer after the completion of each lap. While all ages are welcome to join the race, only those 21 years old and older can drink.

Shannon Price, executive director of the Fine Arts Institute, cited board member Darin Kent as the creative mind who brought the idea to life. In addition to his time with the board, Kent also serves as president of Regent Bank in Oklahoma City.

Kent said he came up with the idea for a run six or seven years ago as a new event to bring to the city.

“We did that, and it was successful,” he said. “We earned a little chunk of money every year, but it never really grew ... if an event like that doesn’t grow over a four- or five-year period, to me, it means it’s probably never going to.”

Kent said he then began to look into runs with gimmicks, adding that he landed on a pub run because of his past participation in similar beer runs in Norman, Tulsa and Oklahoma City. With the opening of The Patriarch nextdoor, he said the time seemed right to make the run a reality.

Kent said the owners of The Patriarch were onboard with participating as a service to the Edmond community.

“They have been great stewards of really just doing this because they think it’s a good event for the community,” he said.

He praised the bar for changing the scope of downtown Edmond.

“My thought process was it’s going to be a win-win for everybody. The Patriarch has been great to us. It gives us a chance to bring some folks to the them,” Kent said. “It’s going to bring awareness about who we are at the [Fine Arts] organization.”

However, one of the biggest appeals for him is that it is an event Edmond has never hosted before. He explained that if the event is successful in its inaugural year, it has real potential to grow bigger and better each subsequent year. He joked that if that is the case, the run could be his “greatest contribution to the city” after about 12 years of being with the institute.

In addition to local breweries, local bands and food trucks will be on hand.

Money raised by registrants will go toward the institute’s general revenue fund, which it puts toward various programs around the city through multiple partnerships. One such partnership Kent highlighted includes offering art classes to children of all ages enrolled in Edmond elementary schools.

“All these funds allow us to do those things,” Kent said.

Visit thepatriarchedmond.com to register and for more information.