Jon Cole typically arrives at Will Rogers World Airport about 30 minutes before his mother’s flight arrives from Atlanta.

Cole’s mother makes the visit to Oklahoma City every few months, and Cole likes to visit the coffee shop on the second level while he waits for her flight.

“I kind of look forward to this cup of coffee,” Cole said. “Always feels like a break.”

Cole might only be buying a cup of coffee, but OKC’s airport makes more money off of purchases like Cole’s on the ground than it does from revenue from airlines and passengers. Twenty-one percent of the airport’s revenue comes from retail, concessions and parking fees, making it the largest chunk of revenue for Will Rogers.

In fact, the airport’s revenues from concessions and parking have doubled over the past 10 years, despite the fact that passenger traffic has only increased by 11 percent during that same time period.

Airport officials say there are multiple factors for the increase in revenue, including a more efficient security process.

“We have worked on our security since 9/11, so I think people have more dwell time in the terminal,” said Mark Kranenburg, director of airports for OKC. “People are getting past security much faster, so they have more time to spend in the terminal.”

Kranenburg also said the companies that oversee concessions have improved the offerings, including an expansion of the food court and the addition of locally owned and operated shops like Sonic and Pops.

“The customer experience has changed so much,” said Karen Carney, public information officer at Will Rogers. “The look and feel [of the concession areas] has been brought into a more contemporary state, which has been one of the biggest changes over the years.”

Over the past decade, the airport has added fast-food options and other cafe-style restaurants and shops. Carney said there are often requests from customers to have more sit-down restaurants and lounges, but those concepts don’t necessarily work in an airport like Will Rogers.

“It’s always a challenge for us because we are an origination and destination airport,” Carney said, referring to the airport’s lack of connecting flights. “We have a limited time to capture our customer. Whereas in Atlanta or Dallas, you have people there for hours.”

Less than 5 percent of the passenger traffic at Will Rogers is connecting to another flight, which means the majority are starting or ending their journeys here.

Parking is a major revenue source for the airport, with parking fees alone accounting for 12 percent of annual revenue. A growth in parking revenue over the years stems from an increase in passenger traffic and a fee increase.

“In the last 10 years, we’ve added a new five-story parking garage and a new surface parking lot,” Kranenburg said. “We’ve added significantly more parking, and we have had it full. We did have one rate increase even though we are still one of the lowest cost airports in the country in terms of parking.”

A 2013 storm that destroyed the only offsite parking company has also sent more business to Will Rogers, as The Parking Spot has yet to reopen.

Airport management also hopes to see a revenue increase in rental cars as a new expansion plan is underway. A new centralized rental car facility is under construction, with plans to open in the summer of 2015.

“That’s going to be a big improvement because that’s going to help us deal with the rental car demand we have not only today, but the growth,” Kranenburg said.

Rental car demand now exceeds the number of spaces Will Rogers has, and the new facility will more than double parking space. The facility will not be directly attached to the main terminal, as shuttles will take customers from the new rental car area to the ticket gate.

“The key is not about getting revenue,” Kranenburg said. “The key is providing the customer with the right product. And right now, we have a problem that we are not able to supply enough cars.” 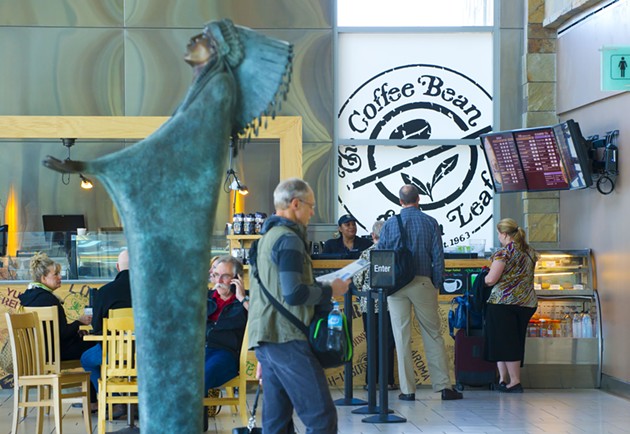 Carney said the managers of the airport’s concessions are drawing up plans for renovations that will modernize some of Will Roger’s older establishments. A $70 million terminal expansion was also approved this year that will add gates, including the possibility of a gate for international flights.

Airlines remain volatile, and many airports have seen flights cut in recent years. However, Oklahoma City has bucked that trend as some airlines view the city as an opportunity for growth, Kranenburg said.

“As goes the economy and the community, so goes the airport,” Kranenburg said. “When we do presentations to an airline and try to recruit service, we spend about half the time talking about the airport ... the other half of that conversation is really about the community.”

Beyond concessions, parking and passenger fees, Will Rogers also brings in revenue through building rentals on its property and federal and state funding and fuel sales, along with several other smaller sources. However, revenue from the cup of coffee Cole buys when waiting for his mother remains a significant source of income.

“Sometimes I get a pastry,” Cole added.