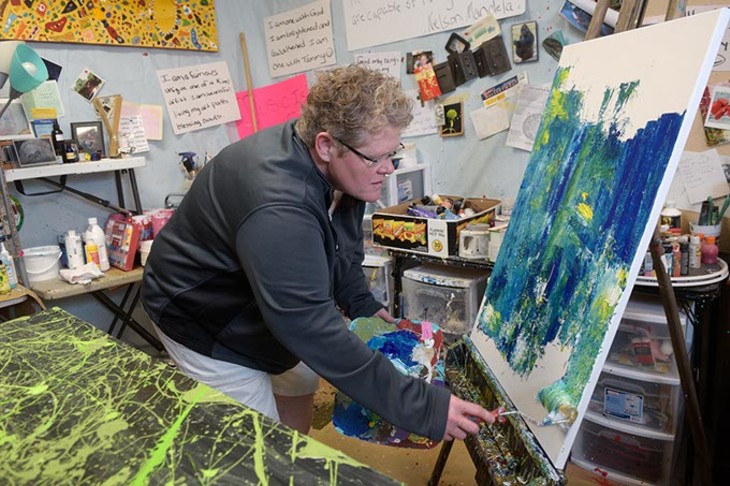 Quotes and messages of positivity and optimism hang all around the studio as Tammy Conover paints. There’s a large quote by Nelson Mandela, but most of them are Conover’s own words — positive thoughts she hopes manifest in her life in tangible ways.

“I like anything that’s positive,” Conover said in a recent interview with Oklahoma Gazette. “I’m a very positive person. I just love everybody — anybody I meet. I can walk in Wal-Mart and make friends in five seconds.”

Painting realistic art, she said, does not excite her. Don’t ask Conover for the world’s most accurate still life or a picture-perfect portrait. She would much rather paint the essence of your soul.

Conover offers a popular soul journey painting service — an art process in which she meets and prays with a person and then paints using God and the subject’s spiritual energy as guidance.

In addition to her soul painting projects, Conover has works on display at galleries in California and in Aspen, Colorado. She said several local collectors also often buy her pieces.

Conover said her work and artistic method is inspired by 20th-century American artist Jackson Pollock, who grew famous for his splattered style. Due to its seeming randomness, Conover said people sometimes assume the style is effortless.

“People think, ‘Oh, you’re just throwing paint on a canvas,’” she said. “Well, it’s not as easy as what you think. There’s a technique to it.”

Conover owns paintbrushes but rarely uses them. Often, she paints with her hands or paint rollers, even kitchen spatulas. Like Pollock occasionally did, she’ll find a stick from outside and use that.

Sometimes she steps up on a ladder and drops paint onto the canvas from eight feet up, using a fan to blow paint and move color across the white plain. The first work Conover ever sold in the Aspen gallery was created while blindfolded.

Often during her creative process, she will put on one of her favorite movies, 2000’s Pollock, which stars and was directed by actor Ed Harris, whose parents are from Oklahoma.

Conover estimates that she has seen the movie at least 150 times.

“I could tell you the movie word for word,” she said. “I mean, I know that movie.”

Painting makes Conover happy, and it’s something she has done throughout her life. But two years ago, she started taking it more seriously in an effort to chase her passions and live life more fully.

Though her spirit paintings are made to help others and she often donates her work to charities for fundraising purposes, Conover said the truth is that the art is as beneficial to her own happiness as it is to anyone else’s.

“I tell people when I paint, it’s like my God time,” she said. “It’s like being in church. When I come down here, I pray and I meditate each time before I start painting. … It’s like the best feeling I can ever feel in my soul when I paint.”

Conover gets people for her soul paintings the same way she gets any other attention to her art or dog grooming business — fervent word of mouth. The artist said she has probably done 100 spirit paintings just this year. Those getting their spirits painted by Conover come in and briefly speak with the artist. Conover then works to relax the subject, leading them through a series of aura cleanses, meditations and prayers. The subject is asked to do little more than listen carefully.

After the prayers, she gets to work depicting the sitter’s spiritual essence. Conover said she rarely knows anything about a subject before a session and they only get to see the completed project.

“I just ask God to bring whatever colors vibrate with their soul,” she said. “The people are really just blown away.”

The process is intimate and feels like a holistic therapy session. Subjects almost always leave feeling satisfied and grateful.

“It’s a very healing experience for people,” Conover said. “Even when people take the painting home, they can feel love and God’s energy. They really feel something from it.”

Conover often uses her art as a tool to help causes she believes in — especially those that help children or animals.

Her reputation as an advocate for those in need eventually led her to the source of much of her artistic direction.

Norman’s Women’s Resource Center held a fundraising film festival event with actor and longtime supporter Ed Harris in November. Because of Conover’s connection to Pollock’s style and her involvement with charitable efforts in the past, the artist was asked to speak at the event and donate a painting to the cause.

That night, Conover got to meet and speak with Harris and presented him with an original painting as a token of thanks for the inspiration he has given her in the past. After countless repeated viewings of Pollock, she was finally face-to-face with the man who — over the course of the film’s production — embodied the famous artist’s essence.

“[Harris] told me that he did feel really connected to Jackson Pollock, which is why he wanted to write the story and produce the movie and play the part,” she said. “Really, I felt like I couldn’t have gotten any closer to Jackson Pollock that night by doing it through Ed Harris.”

The meeting was a poetic payoff for Conover’s years of dedicated work and kindness, but it is not the praise or cool opportunities that keep the artist going. She is naturally good-natured.

“I just love people,” she said. “I really, truly do. I’m all about helping people and helping animals. I’ve always had a positive attitude.”