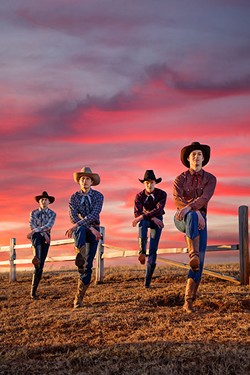 Oklahoma City Ballet opens its 45th anniversary season with Rodeo: A Triple Bill, which brings a dance for every ballet enthusiast to the stage.

Rodeo, which runs 8 p.m. Oct. 21-22 and 2 p.m. Oct. 23 at Civic Center Music Hall, 201 N. Walker Ave., presents one company premiere, one world premier and one ballet that has not been performed by the company for over 30 years. The eclectic mixed bill begins the 2017 season with innovation and tradition, bringing George Balanchine’s Serenade, Robert Mills’ Our Private Rooms, and Agnes de Mille’s Rodeo to the spotlight.

This is the first time in the company’s 45-year history that Serenade will be performed. It’s the third Balanchine work performed under artistic director Robert Mills. Previous performances were Valse-Fantaisie and Rubies. Mills said Serenade inspired the dancers to bring their own personality to the performance because the piece is without a plot. Bringing personality while refraining from overperforming is the key and where Mills said “aspects of the work will be most fresh.”

The second performance is the world premiere of Our Private Rooms. The work was funded through an Artistic Innovations Grant from Mid-America Arts Alliance. Mills created the piece to fill what he called “an aesthetic void” in music and movement.

“The piece is derived from a very personal place for me and utilizes a definite idea I wished to pull the movement from,” Mills said.

The ballet represents a unique opportunity for Mills to create a work and know what ballets would be performed alongside it.

“I have purposely created something starkly contemporary to offset these two iconic works,” he said. “The program will be very eclectic in nature.”

Our Private Rooms is a contemporary piece that seeks to break walls around private and interpersonal relationships and lay them in contrast with public personas. The ballet is primarily composed of solos, duets and small groups of dancers, so Mills sought out music that felt intimate. He chose compositions by southern California composer Dustin O’Halloran, who has composed pieces for feature films and won an Emmy for the theme of TV show Transparent, after coming across his solo piano performances.

The evening will close with Rodeo, originally choreographed by Agnes de Mille (the famous choreographer of Oklahoma!) and scored by Aaron Copland. The ballet features cowboy boot-wearing dancers acting out the story of a cowgirl who attempts to fit in with the cowhands to find a “suitable man.” Mills chose the work for its wide appeal and the balance it brings to the triple bill.

“Serenade is a dreamy, moonlit neo-classical work that is breathtakingly beautiful yet has no storyline. On the other side of the coin, Rodeo is a touching yet humorous story with rousing and exciting choreography,” Mills said. “So I think they contrast each other well.”

He always seeks to incorporate at least one new work into the triple bills.

“Even with iconic ballets like Serenade and Rodeo, I still feel this is important,” he said. “Ballet, like any art form, does not exist just in history; it exists within the artists that are creating work today, the choreographers of today.”

Mills said the works continue his belief that ballet is a living art form because it’s performed in the moment and new ballets must be created.