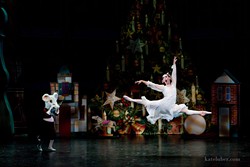 For Oklahoma City Ballet and ballet companies around the nation, there is no season like Nutcracker season.

Robert Mills, now in his 10th year as artistic director of the dance company, has helped raise the annual production into one that draws crowds from across the region. OKC’s production of The Nutcracker is expected to draw guests from Texas, Kansas, Arkansas, Missouri and other states.

“It is definitely a busy time of year,” Mills said. “We get thousands of people into the civic center for these eight performances.”

From the company’s principal dancers all the way down to the 80 or so children from the ballet’s Yvonne Chouteau School chosen to participate in the production, The Nutcracker includes around 160 total dancers. When one includes the backstage crew and Oklahoma City Philharmonic, which plays the classic Pyotr Ilyich Tchaikovsky score for the program, more than 200 total people will take part in the show.

Oklahoma City Ballet opened in 1963 as Oklahoma City Civic Ballet. The Nutcracker, Mills said, was one of the first productions it ever put on, and it has had a presence in the city ever since.

While the company’s production of The Nutcracker certainly qualifies as an OKC holiday tradition, there are numerous other ballet companies across the nation that have also made the show one of its biggest annual events. Over the years, United States audiences have grown particularly fond of the 19th-century Russian ballet originally choreographed by Marius Petipa and Lev Ivanov. For many dance companies, The Nutcracker is their biggest moneymaker each year.

Still, having an annual high-quality Nutcracker in one’s own city is not something that should be taken for granted. OKC, Mills said, is actually quite fortunate.

“Not every major city has a ballet company,” he said. “There’s big cities that don’t: San Diego, Detroit, Indianapolis.”

OKC Ballet is actually in its fourth year taking its production out of state to Colorado Springs to perform with its city’s philharmonic for a series of shows.

The Nutcracker is often seen as an entryway to ballet — particularly for young children. Mills is cognizant of that and strives to pack each of the performances with the intoxicating power of childlike wonder.

“I think how we succeed in that is directly judged by how many people are coming to see it,” he said. “And it’s quite a bit.” 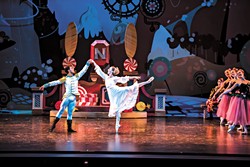 The Nutcracker ballet is loosely adapted from German writer E.T.A. Hoffmann’s story “The Nutcracker and the Mouse King.” The story revolves around a young girl, Clara, and a toy nutcracker gifted to her by her godfather on Christmas Eve. When the clock strikes midnight, something magical happens. The Nutcracker grows to life-size and takes on a life of its own. Clara watches as he leads an army of toy and gingerbread soldiers against an army of mice and their evil Mouse King.

The story concludes in the idyllic Land of Sweets, where the Sugar Plum Fairy reigns in the Nutcracker’s absence.

The ballet was not an initial box office success when it debuted in 1892, but it saw renewed success years later in the United States as a perfect complement to the Christmas season.

Mills said part of the reason the ballet has gained so much popularity is because children love it.

“Right away, you have a story that is centered around a child character,” he said, “so children identify with it more.”

It is also no secret that the U.S. loves Christmas and the holiday season. American audiences have occasionally reattached themselves to Christmas stories even after their initial debuts. James Stewart’s 1946 classic It’s A Wonderful Life, now considered a holiday tradition by many, saw a disappointing box office sales only to gain popularity after it got regular play on television.

Mills said it is hard to imagine a more ideal holiday stage production for families to enjoy than The Nutcracker.

“Having a ballet with the central character as a child and it’s colorful and all wrapped around a story that takes place on Christmas Eve, it’s perfect for families,” he said. “It’s no wonder that it has gained the enormous popularity that it has.”

Mills has seen some productions of the show that have veered away from the ballet’s original adaptation, setting it in a different time or place.

“That, in turn, affects what you do,” he said. “Is it still Clara traveling through the Land of Snow into the Kingdom of Sweets? That opens up so much fantasy.”

Oklahoma City’s production sticks close to the original story. When working to develop costumes and set, Mills said it was important to them to approach the story through a child’s eyes.

A good Nutcracker, he said, is one geared around creating a magical experience for a child.

“It’s about being able to tie into the season and the spirit that puts kids in the wonder, the excitement,” he said.

Mills is well aware that ballet can be a scary thing for people. There is no talking, but many do not realize how effective dancers can be at storytelling using just their movements.

When guests come to enjoy The Nutcracker, there is nothing in particular that one needs to look for. Mills said everyone comes away from the production with their own thing that they like the best, and that is the way it should be.

“With ballet in general, I try to make people understand that there is nothing they need to get,” he said. “You don’t need to know how to make a film to be able to enjoy sitting in a theater and watching a movie.”

And just like no one can judge whether they like or hate all of cinema after watching just one movie, Mills said all of ballet cannot be judged based on how much one enjoys one production. He said anyone who has not seen OKC’s Nutcracker in the last several years will probably be surprised by how spectacular it has truly become. They just need to give it a chance.

“Ballet is a classical art form, but boil it down to its essence,” he said. “This is entertainment, simple as that.”