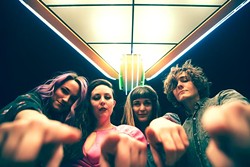 It is an impressive resume for a band yet to release its debut album, though members Morgan Hartman (vocals and synthesizers), Pilar Guarddon Pueyo (guitar) and sisters Caitlin and Alyssa Lindsey (drums and bass, respectively) are currently in the process of readying their 11-song premiere for the first half of 2018.

LCG & the X adds to its impressive run of shows as this year’s headlining act for the second annual AMP Fest, a locally produced, all-female art and music festival in Automobile Alley. The band is scheduled to play 7:15 p.m. Aug. 26 on the fest’s main stage, located in the Iguana Grill parking lot, 9 NW Ninth St.

The festival runs noon-8 p.m. Art vendors and craftspeople will have booths set up along Ninth Street in Automobile Alley. Other performers include indie power-pop group Haniwa, existential rockers The So Help Me’s, rapper Miillie Mesh and more.

LCG has played its fair share of important gigs, but perhaps no crowd has been as special (or as critical) than the one at a lunch hour performance at this summer’s Rock and Roll Camp for Girls OKC.

“It was one of the best shows I ever played just because of how adorable everyone was,” Pueyo said.

The crowd of girls, ages 8-17, had plenty of questions for the quartet after its performance: “Is it hard being in a band?” “How many times do you have to practice?” “How long have you been playing?”

“I tried to tell them, ‘If you want to do something, do it,’” Hartman said. “It might be nerve-wracking, but everyone wants you to do OK. Just get out there and define your time.’”

“You could tell she had been planning this question,” the vocalist said. “‘Uh, yes, what genre are you?’ That was really cute.”

The student was clearly perceptive to LCG’s wide range of influences. The band’s sound includes garage rock, emo and grunge with added moments of classical piano and punk’s cutting lyrical edge in its four officially released singles (which can be streamed on the group’s Bandcamp page, lcgandthex.bandcamp.com).

Hartman said she does not like applying a label to LCG’s sound. The women in the group pull from all kinds of influences, not striving for a particular style other than what feels right to them in the moment.

“None of us are really into concepts of how we want to portray ourselves,” she said. “We just kind of go.”

LCG’s original roster first gathered not as bandmates, but as friends and dating interests of OKC band Larry Chin. Originally formed with local music lynchpin Grace Gordon on bass, they frequently found themselves hanging out together at Larry Chin shows.

They were together so often at these concerts that eventually, they just got tired of watching from the sidelines.

Of course, the band world was not a new concept for most of LCG’s members. Hartman was vocalist and played keys for Feathered Rabbit, and Pueyo can still be found as a guitarist in The Wurly Birds. Drummer Caitlin Lindsey, however, has only been playing percussion (or any kind of instrument) for the last two years. She learned on the drum kit of her grandfather, a devoted multi-instrumentalist.

When Gordon had to leave the band due to other commitments, Lindsey reached out to her younger sister Alyssa as a replacement.

Alyssa had formerly played bass in a teen band for a few years, an experience that soured her on playing in a group. But the opportunity to play with her sister was too good to pass up.

LCG is a group of friends before it is a group of musicians, and that kinship has Alyssa excited about contributing to a band again.

One of the best things about AMP Fest is that it highlights female talent from across the musical spectrum. Indie rock, punk rock, folk, hip-hop and soul all have a presence on the stage. It is an opportunity for young girls not only to see women performing, but performing whichever genre they prefer.

“There’s always been a lot of folk singer-songwriters doing a lot of awesome stuff, but I think lately you’re seeing more from other genres,” Caitlin Lindsey said of the state music scene.

Hartman has noticed more women taking on edgier, grittier song topics. LCG, she said, tries to write from the oppressed point of view, giving a voice and platform for those who don’t have one.

“A lot of [our songs are about] the way it feels being a girl in certain situations, not being taken as seriously sometimes,” Hartman said. “Some of it is angry and just to the point. That’s a lot of what I write about.”

LCG is frequently booked alongside other all-female or female-fronted bands, regardless of how well their playing styles mesh.

AMP Fest serves a purpose with its bill of women as an inspiration for girl musicians and a partial fundraiser for Oklahoma City Girls Art School. Caitlin Lindsey said smaller all-female shows — while perhaps well intentioned — can feel like lazy relegation when no care is taken to make sure the participating bands actually sound good together.

“It is cool to play with other women, and I love that,” she said, “but at the same time, I don’t think we should be limited to only playing with women just because we are women.”

Pueyo said what she needs from male musicians and bookers is to treat her and her bandmates like the musicians they are. Gender has nothing to do with knowledge or skill.

“It doesn’t matter who’s playing the music; we’re just doing what we like,” she said. “I’ve been playing music since I was 5 years old. It doesn’t matter that I have boobs and I’m a woman. That’s all I know.”

Lindsey said AMP Fest and the women performing in it are just part of the many reasons for women to be excited about the future of Oklahoma.

“I think you can start expecting more going on here for women,” she said. “We have the [Rock and Roll Camp for Girls]. A lot of really awesome women are doing a lot of cool stuff in this state.”