Ember Boland is fully aware of the cognitive dissonance that takes place when someone finds out that she is president of Oklahoma City Beard Club.

“It kind of throws people off,” Boland said, laughing.

Boland was good friends with the club’s founder Travis Nance when Nance invited her to a competition in Texas. Boland, an artist who enjoys painting in her spare time, was enticed with the idea of creating a craft-style beard to compete in the whiskerina category, which invites competitors — female or male — to create creative beards and costumes.

“I won my first time, and I’ve been hooked very since,” Boland said, who is ranked ninth in the world in whiskerina. “I like everything about the bearding world. It’s a good group of guys and ladies, and every competition you go to is about helping the community or some sort of charity.”

The fundraising for the club’s upcoming OKC Beard and Mustache Bash 5 p.m. Saturday at 51st Street Speakeasy, 1114 N.W. 51st St., is close to Boland’s heart. Donations from the competition and a silent auction will go to help Boland’s longtime friend Ashley Sikes, who is in her third battle with stage four breast cancer.

Boland and Sikes graduated from Mustang High School together in 2005.

“She’s one of the most genuine and nice people I know,” Boland said of Sikes. “She’s always willing to help anybody and never has a mean thing to say, and she’s a great mom. She’s very optimistic, even through all of this and have a positive outlook on life.” 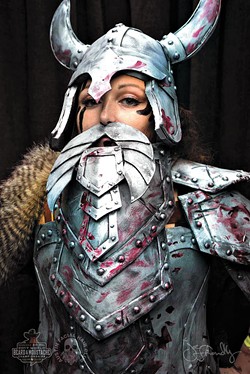 The entry for competitors is $20, and the club is expecting multiple entrants from out-of-state groups in addition to many local members and non-members to compete for bragging rights in nine categories: general mustache, partial beard (chops, goatee, whaler beard, musketeer), natural beard under 8 inches, full natural beard over 8 inches, whiskerina, freestyle and 30-day no-shave mustache and beard.

“People probably respond the most to whiskerina and freestyle because they’re the most out-there. Freestyle will involve everything from paint to lights and glitter. [For whiskerina,] I’ve used paper, quilling; foam to make it look like tree bark; or meal, plastic spoons and hot glue that looked like ice [when dried].”

Participants in the 30-day mustache and beard categories had to submit proof of a clean-shaven face Nov. 1. Winners in each category will receive trophies from Bella Forte Glass Studio and a swag bag of donated goodies.

A $5 donation is encouraged for spectators but is not required to attend. Registration begins at 4:30 p.m., and the competition starts at 6 p.m. Category and silent auction winners will be announced at 10 p.m. Live music will be provided by Normal-C; Don’t Tell, Dena!; Brujo; and Fresh Juice Party.

“There will be music from registration until after the awards. It’s going to be a lot of fun,” Boland said. “All of the bands have donated their time, as well as the Speakeasy.”

This is the first competition hosted by the OKC club in a few years, but the group has expanded, with about 15 active members and more for outside contests. Boland said the group is working to apply for 5013c status in 2018 and hope to host more competitions.

“We don’t discriminate at all; we don’t care if you have facial hair or not,” Boland said.