“All these tires are gel-filled. So if you get a flat, it’s kind of like Fix a Flat that is already built into it,” Smith said. 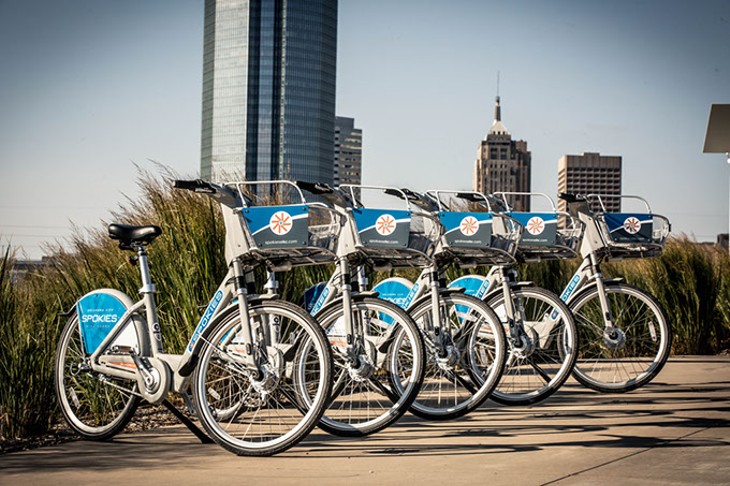 Oklahoma City continues to push for heart-healthy and environmentally sound transportation by improving its pedaled two-wheelers.

Ramping up the quality and quantity of its services, Spokies, the sole bike-sharing program in OKC, replaced its aging fleet with new heavy-duty models.

Eight docks containing up to 50 bikes  total are located throughout downtown, Midtown and Deep Deuce.

Spokies is part of Embark, the public transit division of the Central Oklahoma Transportation and Parking Authority.

The revamped Spokies system, instituted in August, improves on the original in a number of ways, beginning with the bikes themselves.

“They are three-speed bikes. The former bikes are one speed,” said Jeanne Smith, Embark bike share and river transit manager.

The gears shift via an internal hub, allowing a smooth transition rather than the jerky motion of a classic derailleur. Riders change gears with a simple backward twist of the right wrist, a motion akin to revving a motorcycle engine. This allows riders to climb hills with ease.

The new fleet is designed and produced by Trek Bicycle Corporation, a manufacturer out of Waterloo, Wisconsin. The old bikes were created by Worksman Cycles.

Though they were high-grade, they were not constructed for sharing.

Baskets hold up to 20 pounds and reside on the front of the bikes, as opposed to the baskets behind the seats on the Worksman models. And the back wheels of the new designs have skirt guards to protect clothing from becoming entangled in the spokes and help keep riders’ legs cleaner. They also feature built-in generators that power the front and rear lights.

“All these tires are gel-filled. So if you get a flat, it’s kind of like Fix a Flat that is already built into it,” Smith said.

Along with the new bikes, riders enjoy a massive upgrade in software. The new Spokies use BCycle.

Each bike is equipped with GPS and radio frequency identification (RFID) devices allowing riders to search for the closest available bike through the company’s iOS or Android app. Riders who purchase monthly or annual passes are able to keep track of burned calories and miles traveled as well as a measure of their carbon footprint.

The GPS and RFID technology allows Embark to locate bikes and keep the docks better balanced.

The former system involved a confusing half-hour check-in system for those who weren’t pass members. Now, walk-ups can swipe a credit card at the dock kiosk and ride until they are done. Walk-up rentals cost $3.50 every 30 minutes. The first hour is free for pass members.

Pass holders also have access to BCycle bikeshare programs in 28 other U.S. cities participating in B-Connected, including Austin and Fort Worth, Texas, and Kansas City, Missouri. Monthly passes cost $9.95 and annual passes are $70.

Smith said the new bikes have been well-received and offer many benefits to those who take part.

“People say that this system is much easier to use,” she said. “Also, people just don’t have to go to the garage to get your car just to make a short trip.”

Spokies hopes to expand to other areas of OKC in the future.