OKC Broadway brings Disney’s The Little Mermaid to life by diving down into the sea to find stories, song and dance.

If there’s one constant in Disney’s The Little Mermaid, it’s transformation. Deriving from Hans Christian Andersen’s darker fairy tale, the story has persisted in various forms, perhaps most notably as a 1989 animated film by the same name.

Produced by Pittsburgh CLO and Kansas City Starlight, The Little Mermaid stars Diana Huey as Ariel and Eric Kunze as Prince Eric, the wave-crossed lovers who must learn about themselves and each other for their love to survive.

The musical, the most recent iteration of the story, brings a special, live-action element that only theater can provide, according to Kunze.

“It’s taken the animated feature and made it into a full-fledged Broadway musical,” Kunze said. “My character, the prince, has a little bit more backstory and an additional song.”

“Her Voice,” the newly added track, explores Eric’s reaction when Ariel saves his life and all he can remember is the sound of the mermaid’s song. Fittingly, the song is about voices and identity, a reflection of both The Little Mermaid’s core theme and the backbone of any musical.

Another way the musical adaptation reveals further layers to the story comes with “One Step Closer,” a song about dance, Kunze said. Because Ariel and Prince Eric cannot speak to one another, they do so through dancing movements.

While Kunze said Eric fits well into the pantheon of other Disney princes in that he is searching for his soul mate, other elements mark both his character and Ariel.

Just as Prince Eric wants to defy his landlocked expectations, so too does Ariel yearn to escape the depths of the oceans. As so often happens, the two find love through their seemingly opposite desires.

“He doesn’t want to sit on the throne and be that typical king,” Kunze said. “He’s a very free spirit. He prefers to be on the open sea. … She’s a fish out of water, trying to fit in.” 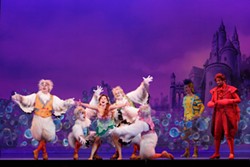 In order to create the appearance of an “underwater world,” replete with fish of all kinds and the octopus sorceress, Ursula, The Little Mermaid makes use of “Disney magic” in its technical elements, Kunze said.

Using a highly specific set of rigged wires, the production suspends some its characters in the air to create the illusion of floating and swimming.

For other characters, lighting and special movements make it look like they are also underwater. More dramatic moments, such as Ursula’s demise, also employ lighting to great effect, Kunze said.

The show’s technical elements represent the latest way of telling the story that continues to resonate with audiences.

“It’s a well-written script, and the story everyone can relate to,” Kunze said. “We just have to bring these characters and make them real and make them flesh and blood.”

Kunze said that director Glen Casale wanted to spotlight storytelling. While audiences have most likely seen other iterations of The Little Mermaid on their television screens or on the pages of a book, the musical brings new power to the story through its scope and staging.

Print headline: Undersea voices, OKC Broadway brings Disney’s The Little Mermaid to life by diving down into the sea to find stories, song and dance.