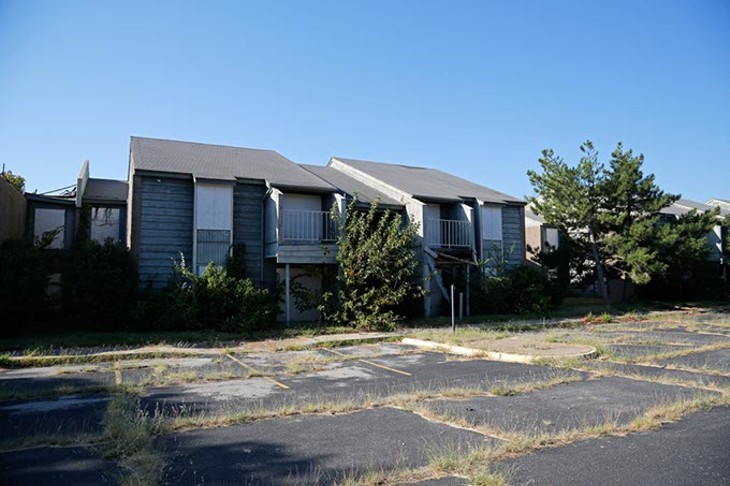 Soon, Oklahoma City residents will finally say goodbye to two notable structures. While many agree both the film exchange building and Lantana Apartments would require extensive repairs in order to become viable properties, the decision to tear down the 89-year-old exchange building continues to be a subject of contentious debate, as opposed to the derelict and deserted 1970s-era apartments.

Before the end of the year, seven fire-damaged structures located in the abandoned western Oklahoma City complex will be demolished thanks to a contract unanimously approved by the Oklahoma City Council on Oct. 13. In a deal that will cost $234,652, well below city staff estimates, K&M Dirt Services will knock down a majority of the apartments at 7408 NW 10th St.

At first glance, it is easy to see Lantana Apartments is in a state of non-viability, and its last tenant moved out seven years ago. City staff is regularly called to the property to respond to fires and abatement issues; more than 100 complaints have been lodged via the Oklahoma City Action Center since 2008. Additionally, $81,959.24 in delinquent taxes is owed on the property, according to data from the Oklahoma County Treasurer’s office.

Council member James Greiner, who represents Ward 1, where the apartments are located, supports the city’s decision to level the housing units and place liens on the property to recoup costs.

“The bids actually came in about $160,000 less than what we were anticipating,” Greiner said. “That’s good news. Hopefully, this will get something going on this property.”

To pave the way for the new MAPS 3 Downtown Public Park, the council approved a measure to collect bids for demolition of structures in its path, which includes the historic film exchange building.

Built in 1926 as the second film exchange building in Oklahoma City, the two-story structure has served a variety of purposes through the years, including a tire shop and federal low-income apartments. Most recently, Oklahoma City Rescue Mission provided its services to the homeless there. Located at 523 S. Robinson Ave., the 16,740-square-foot venue has been vacant for about 15 years, city documents show.

In 2014, the council approved the future park’s master plan, which didn’t include a film building rehab. However, some city leaders and community members called for the structure’s study for potentially adding it into the plans.

In September, landscape architect Mary Margaret Jones told the council attempts to add the building rehab to the master plan failed because the rehab wasn’t feasible.

The Downtown Design Review Committee toiled over the demolition, reviewed park plans and toured the structure. Ultimately, it approved the demolition application in September. The vote was 8-1, with Councilman Ed Shadid opposed.

The stone entrance sign etched with the words “Film Exchange” will be preserved, along with other bricks from the site.