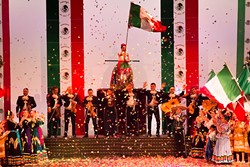 Cinco de Mayo is widely recognized and celebrated in the United States. The day is often misidentified by those not of Mexican descent as Mexico’s Independence Day.

Mexican Independence Day is officially recognized on Sept. 16, which is historically considered the first day of the Mexican War of Independence. The local observation is part of a larger celebration of Hispanic Heritage Month Sept. 15-Oct. 15.

The festival was first celebrated locally six years ago at the Oklahoma State Fair. It moves to its new location this year after previously residing outside Plaza Mayor at the Crossroads, 7000 Crossroads Blvd. Ruiz is also known for helping organize the large annual OKC Cinco de Mayo festival. That festival benefits from a partnership with Oklahoma City’s Mexican sister city Puebla, where Cinco de Mayo originates.

In Mexico, Cinco de Mayo is sparsely celebrated outside the Puebla region.

“For most people of Hispanic descent,” Ruiz said, “Mexican Independence Day is definitely the bigger holiday.”

La Independencia de México festival will include demonstrations of traditional Mexican horse and cowboy culture, including horse dancing and roping. Live music will be played from a variety of genres within Mexican music, including mariachi and banda, a brass-based style derived from German oompah and polka bands.

“Many of these are international recording artists that are coming in from Mexico or [Los Angeles] and other places, so they’re really some widely renowned groups,” Ruiz said.

Mexican Consulate General Rodolfo Quilantán will deliver the traditional yell for independence known as El Grito de Dolores, or the Cry of Dolores. Ruiz compared the historic exclamation by Father Miguel Hidalgo y Costilla at the start of the Mexican revolution to Paul Revere’s Ride.

The festival is fortunate to have a partnership with the consulate, Ruiz said, because he is essentially a representative of the Mexican government.

“That’s a big deal, especially for people that have been in Oklahoma for a long time and sometimes don’t have access to these traditions and culture,” Ruiz said. “We’re trying to make sure the gaps between the new generation of kids and their parents doesn’t grow too quickly.”

This year, the festival moves to a new location to highlight an area of Hispanic-owned businesses, including OKC Plaza Latina, 1024 SE 44th St.

“There’s a lot of things happening on the corner that definitely we’re going to be able to talk about and promote throughout the event, which is nice,” he said.

It is being debated whether the festival should make a new home in the area or continue to move around the city. Ruiz said the festival is for people of all backgrounds and could be considered a learning experience for people from different cultures.

Interstate 35 and SE 44th St. near Buy for Less