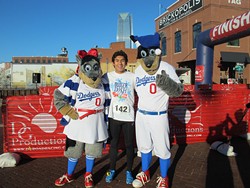 During 2016, “tension” and “drama” seemed to be the main buzzwords hanging over the country. Individuals and groups found themselves at odds over various topics stemming from politics, religions race and more.

Minor League Baseball (MiLB) officials wanted to do something to alleviate those tensions. A call to action was issued to fans around the country to think of ways to be a positive influence in their families and communities and help end violence and discrimination. It was called CommUNITY.

“Back in August, Minor League Baseball launched a community initiative for all 160-plus teams across [the minor leagues] to come together regarding recent tensions that were going on nationally,” said Jennifer Van Tuyl, managing director of OKC Dodgers Baseball Foundation. “Baseball is a place where people can come into a stadium and support each other and celebrate unity.”

Seeing how well the initiative went for MiLB as a whole, the foundation decided to take the concept and transfer it into its inaugural CommUNITY Run.

The run is March 25. It starts on Joe Carter Avenue by the ballpark and ends on the field at Chickasaw Bricktown Ballpark, 2 S. Mickey Mantle Drive. There are three runs. Participants in the 5K and 1K will get a T-shirt and medal, and there will also be a kids run. Registration fees are $5-$25.

“The money will go to the OKC Dodgers Baseball Foundation,” Tuyl said. “We’re also working with the [Oklahoma City] Police Athletic League to bring some awareness to them during the event.”

“We knew we wanted to do a 5K again. You don’t have to be a runner, and you can walk,” Tuyl said.

The Oklahoma City Dodgers Baseball Foundation is a nonprofit corporation whose mission is “to impact the lives of families in the state of Oklahoma, provide educational opportunities for our youth and support the first responders of our state, through charitable contributions and programming initiatives.” 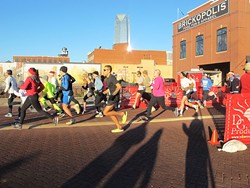 Since coming to Oklahoma City, the Dodgers strived to become part of the surrounding community.

This CommUNITY Run is just the latest endeavor in which they have found a way to help.

“We get requests from so many organizations to help them with their fundraising or spread awareness for their cause,” Tuyl said. “So we know that we’re a really important pillar in the community, and we want to make sure we stay that way. What can we do to help everybody? They depend on us a lot.”

Once CommUNITY Run concludes, runners and fans are encouraged to stay around for the third annual Fan Fest. The festivities start at 10 a.m. and include a hot dog eating contest, food trucks, kids games, a home run derby and an autograph session.

“You can come to the run and cheer on the runners then head into the ball park and enjoy the Fan Fest,” Tuyl said.