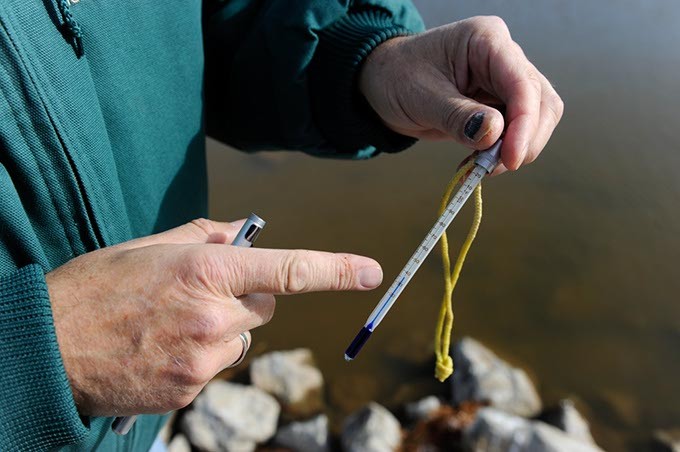 The city’s annual rainbow trout season opened Dec. 1 at Dolese Youth Park Pond, 5105 NW 50th St. Approximately 2,400 pounds of rainbow trout will be stocked at about two-week intervals during the 13-week season, which runs through Feb. 28.

About 90 percent of the trout averages nine to 14 inches in length and three-quarters of a pound in weight. The remaining 10 percent are trophy fish topping 24 inches long and four pounds in weight, according to OKC’s fisheries biologist Bob Martin. He is in his 33rd year working at the H.B. Parsons Fish Hatchery, located at Lake Hefner.

According to the Oklahoma Department of Wildlife Conservation (ODWC), rainbow trout, which are native to the cold streams west of the Continental Divide, have been introduced to Oklahoma with great success. Last year, the ODWC stocked 5,000 rainbow trout at Dolese Park.

Through creel surveys, which help fish management experts gauge trends, Martin estimates that local fisherman — primarily metro residents over 50 — put in about 18,000 angler hours per season, catching 80 to 85 percent of the trout stocked.

Martin said that catching a big trout “puts a lot of smiles on anglers’ faces.” The rainbow trout are bought from a commercial hatchery in Nebraska, thanks to federal funds administered by the ODWC and private sponsors Dolese Bros. Co. and the 89er Chapter of Trout Unlimited.

Trout season is part of the Close to Home fishing program, a cooperative agreement between state municipalities and the ODWC that encourages fishing in urban ponds, lakes and rivers.

“A lot of people don’t realize that Oklahoma is home to some great fishing,” said Micah Holmes, ODWC information supervisor. “We want it to be as easy as possible to go fishing.”

Operated by Oklahoma City Parks and Recreation, the H.B. Parsons Fish Hatchery is the only municipal fish hatchery in Oklahoma. More than 5 million walleye, striped bass hybrids, channel catfish and hybrid sunfish are raised annually at the hatchery. The fish are stocked at Lake Hefner, Lake Overholser, Lake Stanley Draper and local Close to Home fishing waters and are provided by the ODWC at no cost.

Fishing generates revenue through the sale of state and municipal fishing licenses, and the local economy is boosted as anglers purchase equipment, food and gasoline to support their hobby, Martin said.

“We are supporting sport fishing on city lakes,” he said. “And I like to think, along with the fisheries management work, we are doing stewardship to the resource.”

The city will host a free family trout fishing clinic on Jan. 16 at 7 p.m. at the Putnam City High School gymnasium, 5300 NW 50th St. During the clinic, anglers will learn about the best bait and lures to catch trout, angler ethics, knot tying, casting and other fishing tips.

Pre-registration for the clinic will begin in January. For more information, call 297-1426.