OKC food trucks plow through what used to be the offseason

Food trucks are no passing fad. The ubiquitous mobile vendor and longtime staple of major cities like New York City and Chicago moved into Oklahoma City about 5 years ago.

It has rolled from trend to dining staple.

Trucks now stay open year-round, through what many call the offseason, because they’re always in demand.

H&8th Night Market, a monthly celebration of meals on wheels open through summer and fall, deserves much of the credit for the public’s piping-hot reception to the concept.

“We were there at the first H&8th. It started with three trucks,” he said.

At the time, there were only a handful of trucks in the metro that weren’t taquerias, mobile taco and burrito vendors.

Starns and his wife, Nancy, put up their post-retirement savings to get the barbecue trailer going. They’ve only missed one H&8th Night Market.

But the truck has a life outside of the festival.

For the past few years, it has stayed open by catering private events. For Starns, that’s a hallmark of success.

As the winter set in and customers weren’t as keen to travel far for a meal indoors, even fewer waited in line in the chilly air. But they still wait in lines. Indeed, food trucks are multiplying across the city, and there are more than enough events to keep them mobile through spring and summer.

Last spring and summer, H&8th’s popularity hit record attendance highs as it expanded its boundaries from N. Hudson Avenue and Eighth Street. Brian Bergman, who created the market, said that it grew beyond all expectations.

“Most truck owners tell me that they make the revenue for their overhead in that one night,” he said.

A true test of food truck success takes place during the months that H&8th is on hiatus. Between November and March, many trucks would simply close or do a few small, private bookings.

However, with the success of all-season events that welcome the vendors, it’s no longer a fair-weather game.

Premiere on Film Row, a monthly festival in the historic arts and entertainment district downtown, is one example. Year-round, on the third Friday of each month, trucks line Sheridan Avenue.

For a bigger picture, the impact of The Bleu Garten, 377 NW 10th St., cannot be understated. The food truck park offers shelter, heating, seating, live music and television in a communal space shared by food vendors.

Gannon Mendez, owner of The Saucee Sicilian, said that The Bleu Garten was a major consideration when he decided to stay open through winter.

“A lot of people don’t want to travel very far in the winter,” Mendez said. “The great thing about Bleu Garten is that it’s centrally located and set up for the weather.”

He said it’s not just a blank parking lot in the frigid cold. And, indeed, business catering takes up much of food truck’s time during off-hours. 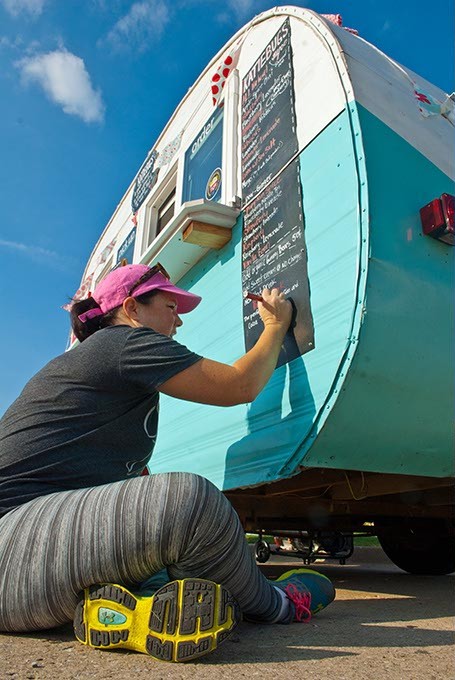 Mendez is in his first year with The Saucee Sicilian, and since his primary challenge is marketing his fare, he said that his main tools are The Blue Garten, social media and the Truck It OKC app.

He is experimenting with different ways to adapt to the weather, including car delivery and partnerships with retailers.

“Since we have our three TVs, we tell them they’re more than welcome to sit there,” Mendez said. “But they can stay warm in their car, or they can go inside wherever we’re parked and shop around.”

Mendez recently parked the truck at A Date With Iris, 4201 N. Western Ave., and encouraged customers to go in and peruse the shop while he prepared their orders.

All parties enjoyed the arrangement, and Mendez said he looks forward to trying it with more retailers. Currently, he’s working out details for a partnership with Waters Edge Winery, 712 N. Broadway Ave., during January’s Auto Alley Shop Hop on Broadway Avenue between NW Fourth and 10th streets.

Some trucks even adapt by adding menu items to fit the seasons. Some, like Katiebug’s Shaved Ice, change things up completely. Rather than serve shaved ice like it does in the summer, Katiebug’s becomes a hot chocolate truck with natural, organic hot chocolate (both dark and regular) and handmade marshmallows in flavors like salted caramel and snickerdoodle.

The truck made its menu switch public during the Holiday Pop-Up Shops that blanketed Midtown in November. Katiebug’s will be around town all winter, serving up its signature Hug in a Mug (classic hot cocoa) as well as a list of rotating specialties.

Annaleigha Harris, owner of The Crepe Brewers, is another owner who has seen the city embrace the food truck movement.

Her menu changes with the seasons, and she has no trouble staying busy.

“I’m working through the winter this year without taking a break and really glad to be able to do it,” she said. “It seems like there’s a lot more opportunities for food trucks this winter season.”

With plenty of events and The Bleu Garten’s warm ambiance, OKC food trucks plow through what used to be the offseason. 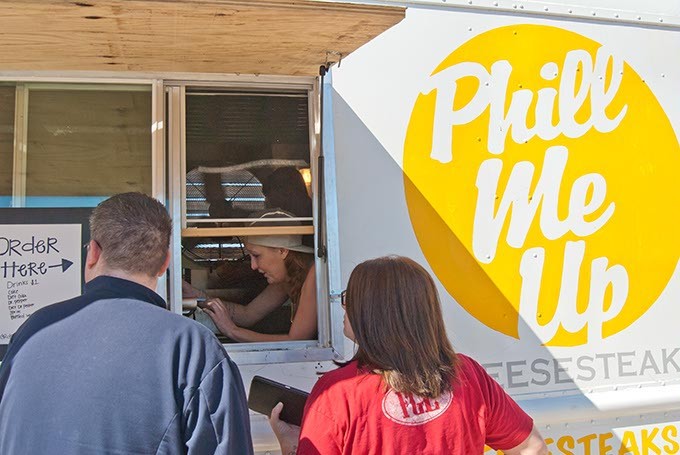 We talked with Hunter Wheat, owner of The Bleu Garten, and Josh DeLozier and Travis Stephens, creators of the Truck It OKC app, about trucks that are open through the winter. All three reassured us that there are plenty to choose from.

During this month’s Auto Alley Shop Hop, 6-9 p.m. Jan. 15 on Broadway Avenue between NW Fourth and 10th streets, The Saucee Sicilian food truck pairs with Waters Edge Winery to offer pizzas and wines that complement them.

Owner Gannon Mendez said he has created several special pies for the event.

The city’s love for mobile food is clear when fans line up in the wind, rain and snow to get their favorite handheld foods. There is, however, a limit to the extremes that even the most diehard truck fans will endure. Hunter Wheat, owner of The Bleu Garten, found that extremely cold temperatures can drive even the most dedicated trucks and customers inside.

“What we’re seeing is that any day it’s under 40 degrees, business is too slow to stay open,” Wheat said.

Wheat isn’t closing shop, though. He said that he and the trucks are taking things one day at a time.

Check with The Blue Garten’s social media pages and the Truck It OKC app to learn which food trucks are there.

In the meantime, The Blue Garten gets a toasty update: Due to safety issues and city codes, the park cannot have open-flame heaters inside covered seating areas, so Wheat will install new, outdoor heaters. But it will keep its blazing fire pit, perfect for warming your backside or toasting marshmallows.