Oklahoma City is the only non-border city in the nation with the ‘consuming fire’ of heavy drug movement. Why? Our highways.

An evidence recovery worker with the Oklahoma Bureau of Narcotics and Dangerous Drugs (OBN) cuts open a kilo of cocaine, exposing the white brick. On the surface of the brick, which was confiscated in a recent bust, is the faint image of a footprint, almost as if an infant’s foot was cast into a molding to be kept in a memory box.

But this is no keepsake. Rather, it’s a marking placed by the drug’s manufacturer as a way to identify its source.

“It’s kind of like a barcode,” said Darrell Weaver, director of OBN.

Drug enforcement agents know the majority of narcotics that flow into Oklahoma are from Mexico. The stamp on the cocaine most likely indicates it originated in Colombia and passed through Mexico and one of the seven major cartels that control the bulk of drug trade into the U.S.

“If you are a cartel member responsible for bringing a truckload of Colombian cocaine into Mexico and you have 10 different groups [of drugs] that are loaded in your car, the stamp is a way to signify where it came from,” said Mark Woodward, an OBN spokesperson. “[The stamp] is similar to UPS packaging. It’s basically to identify ... to know who is to get how much money when it’s brought into the United States.”

Woodward likened the stamp to a marker used by an internal accounting department, and that’s not an exaggeration. Many of the largest cartels in Mexico operate with the precision and attention to detail of any legal corporation making shipments across the continent. In that analogy, Oklahoma City is a major distribution hub.

Six hundred and twenty-two miles up Interstate 35 from the Texas-Mexico border, OKC is a destination for many Mexican drug cartels looking to push their products into the United States.

The price for methamphetamines can increase once the product leaves Texas, and the intersection of I-35 and Interstate 40 — two highways listed as primary drug routes by the National Drug Intelligence Center — makes OKC a transportation hub for drug trafficking.

Another sign that OKC is a target of drug cartels comes from a report by the United States Drug Enforcement Administration (DEA), which maps the American presence of the seven largest Mexican drug cartels. It identifies OKC as the only city not located in a border state — Texas, New Mexico, Arizona and California — that is considered within reach of all seven cartels.

When Weaver looks back at the six major investigations his agency has performed over the past two years, each of them has a connection with Mexico.

“We are not seeing the violence here that we see with cartels in Mexico,” Weaver said. “But they are here.”

OKC is a gateway to cities like Kansas City, St. Louis and Chicago. However, it is also a destination for drugs. More than 80 percent of meth sold in the city is supplied by Mexican drug cartels, according to the OBN.

While local dealers and sellers in OKC are supplied by Mexican cartels, few have any direct interaction with those responsible for shipping narcotics into the region, local police said. Without a direct connection between dealer and supplier, law enforcement agencies are forced to perform sophisticated and long-term investigations that can take months, if not years, to complete.

“Like any other business model, you have your supplier, your wholesaler and your mid-level management,” said Chris Woodruff, commander of special projects with the OKC Police Department. “Those in Oklahoma City selling, even the mid- and upper-level dealers, are not associated with the cartel. But there is no doubt they are getting the drugs from the cartel.”

OKC’s streets. A multi-jurisdictional investigation last year unraveled a drug distribution network that had been overseen directly by a Mexican cartel.

In April 2013, the OBN, along with the Department of Homeland Security, the Bethany Police Department and several other agencies, executed 21 arrest warrants on an organization that had been shipping as much as 25 pounds of methamphetamines into central OKC each week.

Weaver said the case was unique because the network was directed from Culiacán Sinaloa, Mexico, which is a base for the Sinaloa Cartel.

“Sinaloa has as much influence as anyone in Oklahoma right now,” Weaver said. 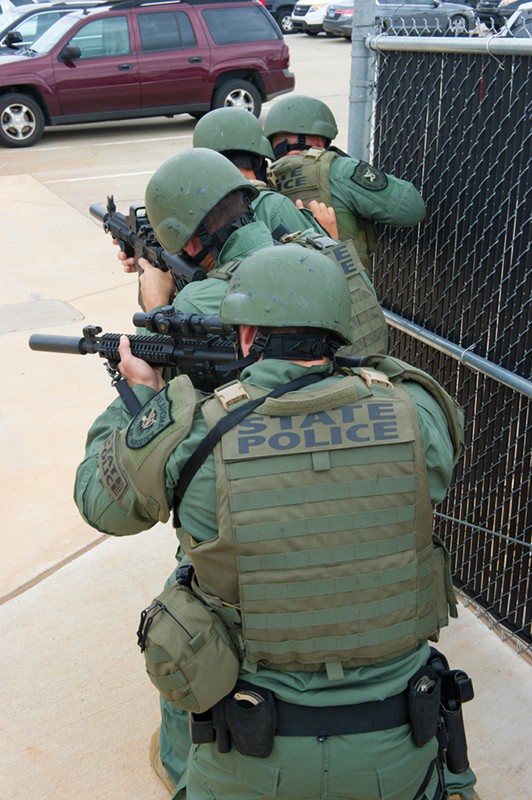 The Sinaloa Cartel is viewed as one of the largest drug organizations in the world, and its narcotics can be found in almost every major city in the United States, according to the DEA. With an inventory of cocaine, heroin, marijuana and methamphetamine, the Sinaloa are just one of several cartels supplying America’s drug addiction.

The Los Zetas is another major Mexican cartel with a presence along the U.S.-Mexico border and in the major cities near the Great Lakes. In 2012, the Federal Bureau of Investigation completed a three-year investigation that led to the arrest of Jose Treviño Morales, the brother of two leaders with Los Zetas. Morales was operating a horse farm in Lexington, 40 miles outside Oklahoma City, but was using the farm to launder millions of dollars. “Core family members of the cartel and key business partners were impacted by this case,” Special Agent David Villarreal, who supervised the investigation, said at the time of the echelons of the cartel’s leadership, and that sends a message to the cartel and to people who are laundering money on the American side of the border.

High-profile arrests and major investigations won’t stop the flow of drugs into the U.S., but they do force the cartels to constantly change their tactics, Weaver said. The work of law enforcement also keeps the violence often associated with Mexico from spilling over the border and onto America’s streets.

“They cannot corner the market like they can in Mexico with violence because they know they can’t get away with it here,” Weaver said. “Law enforcement in the United States is different than it is in Mexico. We don’t have corruption or dirty cops. You may have a bad apple here or there, but its nothing like it is in Mexico.”

“The people who are trafficking the narcotics in [Oklahoma] change their tactics all the time,” Woodruff said. “We have seen an increase in the last couple of years ... but there may appear to be a dry year because they are leery of coming through OKC or going a particular route.”

Over the past several years, the OBN has shifted its attention to Mexican cartels by hiring bilingual agents and the use of more wiretap investigations that focus on cartels, Woodward said.

“Before [the North American Free Trade Agreement], the border was so tight that a lot of the Colombians would smuggle cocaine through the ships and over air,” Woodward said. “But NAFTA really opened the border [to drugs].”

Prior to NAFTA, shipping drugs into the U.S. was performed mostly

by groups from a variety of countries, Woodward said. In addition to Colombian groups using seaports, there were also Nigerian groups bringing large amounts of heroin through ports on American coasts. NAFTA created a funnel of those drugs through Mexico.

“We realized we needed to change with the times, and in 1996, we started hiring bilingual agents that could work wiretaps,” Woodward added.

America’s drug enforcement is often referred to as the “war on drugs.”

“I don’t like that term,” Weaver said. “I think you set yourself up for failure anytime there is a war because that means somebody’s got to lose.”

Don’t get Weaver wrong; he wants the Mexican cartels to lose, and he believes his agency is winning plenty of battles. But he also doesn’t see the shipment of drugs into Oklahoma ending anytime soon.

“Are we winning this war, if you want to call it a war?” Weaver asks. “I think there are times when we win, but the problem is the drug issue is a consuming fire. [The cartels] are like a cancer that will not stop.”

You could call the work of the OBN and other agencies the chemotherapy, Weaver said. Enforcement keeps the drug cancer from getting worse, but it’s hard to completely eradicate it.

“I think we are winning because I know how bad it could be and it’s not at that level,” Weaver said. “These people are not going to stop. If enforcement stopped tomorrow, they would take over the streets.”

The U.S. Drug Enforcement Administration reports the reach of the seven major Mexican cartels operating in America. Oklahoma City is the only city not located in a U.S.-Mexico border state to be within reach of all seven cartels, the DEA reports.

Sinaloa Cartel Viewed as one of the largest drug organizations in the world, Sinaloa Cartel has a presence in nearly every state and major city in America, according to the DEA. The DEA has also listed every county along the border a high-intensity drug trafficking area by this group. Cocaine, heroin, marijuana and methamphetamine are the primary drugs for this cartel.

Juárez Cartel The Juárez Cartel also has a reach into most states, including a significant presence in Tulsa, Oklahoma City and Lawton. Cocaine, heroin and methamphetamine are the primary drugs trafficked in by this cartel.

Tijuana Cartel The Tijuana Cartel traffics drugs into the American Southwest and in the states surrounding the Great Lakes. Cocaine, heroin and meth are the primary drugs trafficked by this cartel.

Gulf Cartel With a presence in the Southwest, Southeast and East Coasts, the Gulf Cartel has been identified as one of the more violent cartels operating just beyond the U.S. border. The Gulf Cartel primarily traffics in marijuana and cocaine.

Los Zetas The Los Zetas cartel covers the lower half of the U.S., along with several states and major cities around the Great Lakes. Los Zetas’ drugs of choice are cocaine and marijuana, and the cartel has been listed as one of several who has also been involved in human trafficking across the border.

La Familia Michoacana Also known as LFM, it has a similar reach as BLO. LFM ships cocaine, heroin, marijuana and meth into the southern U.S. This cartel has, at times, been reported to be near disbanding, and authorities believed they had killed its leader a few years ago. However, that report was proved false when Mexican officials confirmed they had gunned down the leader this past year.

print headline: The drug crossroad of America. Oklahoma City is the only non-border city in the nation with the ‘consuming fire’ of heavy drug movement. Why? Our highways.