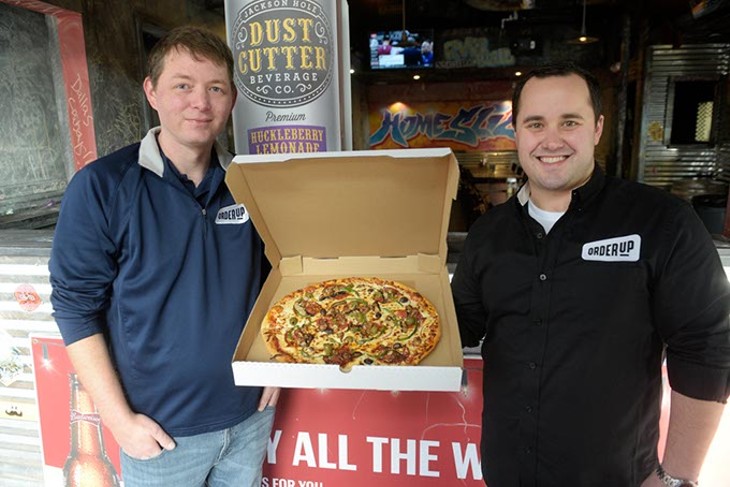 Going out every night of the week sounds fun until you actually do it. It’s a way of life for Postmates driver Chris Jackson.

Postmates and OrderUp restaurant delivery services arrived in Oklahoma City in 2015. Jackson was quick to sign up when Postmates arrived in the city.

“I have been an IT (information technology) guy for like 20 years; I’ve worked for different people all over the city,” he said. “When this new product came here, I thought I could use it to fill in the gaps when I’m not busy, so I signed up to do it.”

A few months later, when he lost his IT job, Jackson was glad to have the added income. It also inspired him to strike out on his own.

“Postmates turned into more of a full-time job,” he said. “I decided to branch out on my own and do IT consulting.”

It’s a lot of work — Jackson said he often put in about 70 hours a week between his jobs — but delivery driving has been lucrative and freeing.

“You get to do what you want to do. Today, I spent some time grocery shopping during the day because my wife was hunting for an ingredient for something she’s cooking,” he said. “I can do Postmates at the same time and make some money.”

Tulsa native Blake Cantrell was in Boulder, Colorado, with his future wife when he first encountered OrderUp.

“It was late 2011, and I thought there really wasn’t anything comparable to a multi-restaurant delivery service like this in Norman or the metro,” he said.

When they were getting ready to move back to Oklahoma, Cantrell bought the franchise rights for Norman, Oklahoma City and Stillwater. He launched Norman’s service first in 2015, and Oklahoma City followed later that year. Stillwater’s OrderUp started service in 2016.

“One thing unique about OrderUp is we combine the big company model and franchises,” he said. “So you get great the tech and customer support a larger national company provides with real-time driver tracking and a really great app.”

But because he’s a local franchise owner, he can be close to the ground with marketing efforts to help drum up business for local restaurants.

Being based in Oklahoma City is also helpful when signing up restaurants, Cantrell said. Some restaurants approach OrderUp through its website, but he visits with many of them personally to explain the benefits of the system.

OrderUp has about 100 drivers between the three markets and uses an algorithm to pair delivery drivers with restaurants.

“The dispatching system operates off an algorithm, so if we’ve just opened, the driver closest to the restaurant gets the dispatch,” Cantrell said. “If it’s busy, the first available driver will be given the order that’s ready first.”

Postmates has a similar system, Jackson said. After making more than 4,400 deliveries for the company, he has developed a routine to maximize efficiency.

“You never know what you’re going to get. I have a little route that changes throughout the day,” he said. “A lot of Postmates sit in one spot, but I move around. One restaurant can be hot one night and dead another.”

“I haven’t delivered an Xbox, but I have delivered an Apple TV, a Chromecast, iPads, Apple Watches, video game orders, chargers from Best Buy,” he said. “It’s people who need something and they need it right then.”

Sometimes that includes personal items, like diapers and children’s cold medicine for parents who can’t get away from the house.

“I once got an order for toilet paper and the guy texted me saying, ‘Leave it on the doorstep,’” Jackson said.

Orders range from small — while talking to Oklahoma Gazette he saw an order pop up for two Twix bars, three packages of gummy peaches and two bags of white cheddar-flavored Smart Food popcorn — to upwards of $600.

“Mahogany [Prime Steakhouse] is always a big one. I’ve had a delivery for Meat Market Refectory for $300,” he said. “I probably get an order that big about once a week.”

It’s a nice way to make money, but delivering also fills a huge need, Jackson said. Nurses and doctors are often unable to leave work, so when the cafeteria is closed, they rely on delivery services.

“I’m 44. When I grew up, if you got delivery, it was pizza or Chinese. Now, you can get anything,” he said. “Late night, after midnight on the weekends, people who have just left the bar might want Beverly’s [Pancake House], Taco Bell or Whataburger. Now you can come home and get all that food and not risk getting a DUI.”

Jackson said Postmates drivers are paid by the wait time at the restaurant and they get a per-mile fee for driving, but tips make a big difference.

Postmates delivery fees start at $3.99 for in-network merchants. The company is rolling out a new monthly subscription service for $9.99 that gives subscribers unlimited free deliveries with a minimum $25 order. That service has not yet reached Oklahoma City.

Cantrell said OrderUp’s delivery prices are $3.99-$4.99 regardless of the order size or delivery distance, which gives them an edge in price.

“The ease of use is one of our benefits,” he said. “We’ve got a great app and a desktop site where you can see the entire menu right in front of you,” he said. “With this, you get specials offered all built into the menu in addition to real-time driver tracking.”

Delivery is a good business to be in right now, Jackson said. Though he’s still working on other avenues of income, he’ll keep delivering as long as there’s a demand for his services.

“And the demand has only grown,” he said.