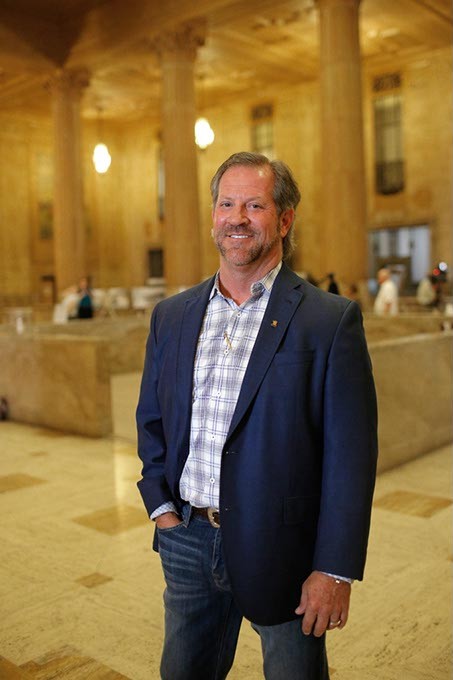 Not long after Gary Brooks announced he was buying downtown’s First National Center and launching a $230 million building renovation, the packages and stories began rolling in.

While standing in the building’s Great Banking Hall last week, Brooks pointed to his golden lapel pin about the size of a nickel and shaped like the number 1. The pin and a stack of First National Bank and Trust Co.’s company newsletters dating as far back as the 1950s were delivered to his office with no names attached. The newsletters, with their bank history and faded photos of former employees, spurred a desire to know more about the company and the downtown landmark. The 1931 art deco-style skyscraper, built to house the bank, holds architectural significance that some argue rivals that of New York City’s Empire State Building, which broke ground one year earlier and was also completed in 1931.

“The first thing I did was begin to research the history,” said Brooks, CEO of Cornerstone Development. “I got into commercial real estate in 1987, the year after First National closed. I remember coming in here in my 20s, but it didn’t mean a lot to me then. I had to start from scratch.”

First, Brooks read Michael Hightower’s Banking in Oklahoma: 1907-2000, which maps the history of banking to the turn of the millennium. Second, he listened as people shared their personal connections to the building. Third, he saved building artifacts — bank brochures, yellowed architecture drawings, silverware from The Beacon Club and more. Last, Brooks began to post his finds, building history tidbits and future project plans on Twitter.

On Jan. 11, when Brooks and partner Charlie Nicholas closed on the $23 million purchase, he had three Twitter followers: his wife and two children. Brooks’ Twitter followers increased tenfold over in six months. He tweets at @GaryDBrooks.

“It’s been unbelievable,” he said. “People are interested, and I certainly underestimated the interest.”

In three years, when First National Center’s renovations are planned for completion, the building will offer a 145-room luxury hotel, 200 apartments, a high-end basement vault restaurant, a bar and lounge with downtown views from the 31st floor, 25,000 square feet of retail and commercial space and parking.

Since the hotel serves as the building’s heart, the Great Banking Hall will become the lobby. Plans call to restore the hall, and Brooks described its future as an artful blend of historic charm and meeting expectations of modern travelers and guests. The hall’s 16 sandstone columns, along with the murals and ornately decorated bank teller windows, will remain.

“We envision any given day to look like this,” Brooks said.

June 16 and 17, Brooks welcomed the public to view the building before renovations forced its closure. People of all ages visited First National Center, located at the intersection of Robinson and Park avenues, to tour the facility and glimpse its future. Projections of the renderings were beamed onto a white screen in the banking hall.

Hotel rooms and suites will be on the first through eighth floors. Apartments will be on floors nine to 30.

The project comes with a $230 million price tag but will receive public and private investments through the use of historic tax credits and tax increment financing (TIF) funds. The building is located in one of the city’s TIF districts.

“You don’t make an investment like this and worry about what oil and gas prices are going to do in the next year,” Brooks said when answered if the timing was right to deliver downtown a project of this magnitude. “The leadership in this city is the reason I’ve chosen to bring my partner in and spend $230 million. I believe … the city council will continue to lead, along with the mayor and city manager, in a way that will make this project successful. That’s why we bought it. We trust the leadership of the city to continue that growth trajectory regardless of energy prices or other outside influences.” 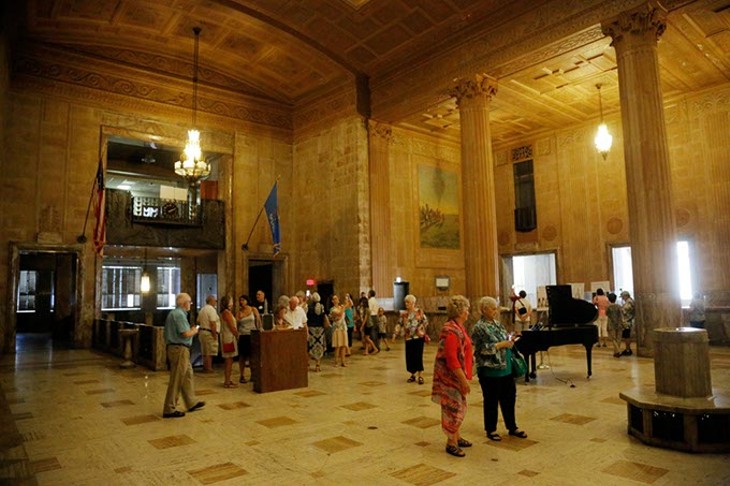 As a gentleman who worked at the bank in the 1980s and a former museum docent who brought school children into the building as part of a downtown tour decades ago shared their memories, Brooks smiled and thanked them. He also shared a business card with a web address. Brooks wants their stories and memories documented.

FriendsOfFirstNational.com allows people to share stories and memories of the building, which will also house a museum in the hotel’s lobby. Website visitors can even upload or send photographs or other historic files.

“We are trying to capture those stories,” Brooks said. “We want to know about the people who worked here. What did they do? … We are going to commit a lot of our energy and our space to that history.”