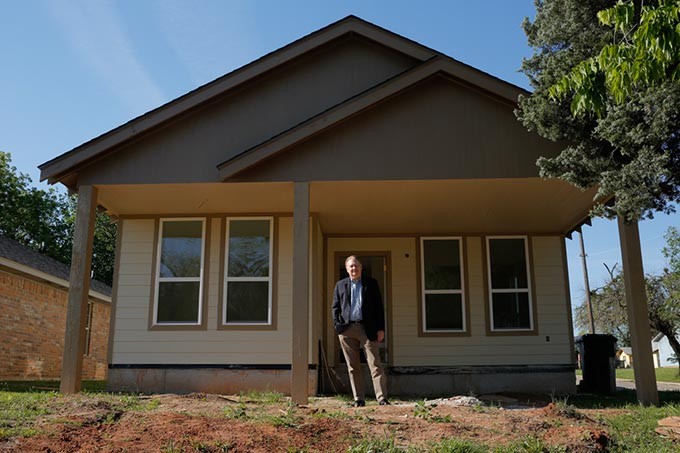 Last fall, as Hayden Smiley browsed apartment rentals online, she scrolled over to homes for sale. As a recent college graduate with secured employment and some savings, she considered buying her first home.

Smiley moved into her new three-bedroom, two-bath house in Classen’s North Highland Parked — an eastside neighborhood in the midst of a rebirth — about six months ago.

“There is so much potential for this neighborhood,” said Smiley, who was attracted to the area because of its close proximity to downtown OKC and its walkability. “There are empty lots, but there are people buying them to build. Older homes are being renovated. We have a great park, and there are tons of kids in this neighborhood.”

Smiley turned to Positively Paseo, a nonprofit that accesses federal housing dollars to construct or rehabilitate homes for low- to moderate-income households, for help.

“I am just out of college and I was able to purchase a home,” said Smiley when seated in her living room and sharing her experience with Oklahoma Gazette. “I had the easiest time — so many people helped me. From what I hear from others in my office, buying homes is not easy.”

For more than a half-century, the Department of Housing and Urban Development (HUD) has made it possible for many low-income citizens  — everyone from young adults who are still getting started in their careers to retired seniors — to obtain housing through subsidies and for municipalities to build affordable housing through grants and instigate anti-poverty programs helping the homeless.

Oklahoma City is like many American cities experiencing an affordable housing shortage. Families who pay more than 30 percent of their income for housing are considered having a “housing burden” and have difficulty affording other daily necessities such as food, transportation and clothing. Housing burdens make it nearly impossible for families to save for big future purchases or emergencies. According to the City of Oklahoma, more than 40 percent of residents — an estimated 95,000 households — have a housing burden.

To expand affordable housing, the city looks to HUD, receiving on average $7 million annually in federal grants to finance activities like housing rehabilitation, homebuyer assistance, neighborhood revitalization and homeless assistance. It’s a federal agency with a mission that goes beyond Section 8 vouchers and the public housing projects of the 1960s and 1970s.

One program housed under HUD is the HOME Investment Partnerships Program, a federal block grant distributed to state and local governments designed to create affordable housing for low- and moderate-income households.

HOME, along with the Community Development Block Grant program, is listed for funding elimination in President Donald Trump’s budget blueprint released in mid-March. While federal lawmakers reached a $1.1 trillion spending deal earlier this month that protects HUD and its programs through October, many believe the agency is still poised for change under the Trump administration and that could mean changes to housing affordability.

City officials, including Ward 6 Councilwoman Meg Salyer, fear it would be much harder to carry out the city’s affordable housing initiatives if there were federal cuts or elimination. At the April 25 Oklahoma City Council meeting, she asked city planner Chris Varga about crisis planning for the program’s future.

“These are the only monies we have to fund these programs,” Varga said. “This is all we have. If the programs go away, I assume they go away unless we find other city funds somewhere.”

In the northeast OKC neighborhood of Culbertson East Highland, an area shaking off blight and neglect with the help of the city’s Strong Neighborhoods Initiative (SNI), construction crews are nearing completion of a newly built bungalow home between 1,300 and 1,400 square feet. On a block where homes were built between the 1920s and 1940s, Neighborhood Housing Services Oklahoma City (NHSOKC) strikes a balance with new, modern builds that match the historic style of the neighborhood.

Roland Chupik, NHSOKC executive director, said HOME funds through the city made the home a reality. Once on the market, it will be sold to a family who meets the income-cap requirements. With OKC’s affordable housing shortage, Chupik and his team have no trouble working with young singles, small families and retirees.

“All the housing we build works to stabilize and to rebuild a community,” he said.

Since 1981, thousands of families have turned to NHSOKC for assistance with loans and down payments as well as homebuyer education classes and financial counseling. With a mission to serve families in purchasing their first home, NHSOKC also partners with the local and state government for HOME projects and other federal housing initiatives.

HOME dollars come with a nice benefit to nonprofits like NHSOKC, Chupik said.

“It’s not just used one time,” he said. “The money is replicated. Let’s say we build a home with $100,000 in HOME funds. We sell it for $90,000 — we can sell at a loss to make sure folks can afford the house. We take that $90,000 and we build another house. We sell that second house and funds left become unrestrictive dollars for the organization. It’s one way we help fund the organization.”

Since the HOME program helps people get on the property ladder and the path to homeownership, it drives the local economy. Not only do HOME houses raise neighborhood property values, but new owners contribute to property taxes, providing revenues for local governments.

‘Icing on the cake’

As the executive director of Positively Paseo, Sheryl Lovelady can walk block-by-block in Classen’s North Highland Parked, another SNI neighborhood, and point to the organization’s work. There seems to be a common theme: Private development crops up between HOME houses.

The city, through SNI, has leveraged federal funds for its affordable housing initiatives. Those funds, coupled with city dollars, have brought new sidewalks, removed dangerous trees and created new public spaces, like parks.

While neighborhood revitalization is very much centered on building stronger neighborhoods, it’s the new families — mixed with longtime residents — that are responsible for the hope rising in Oklahoma City, Lovelady said.

“The city’s goal is to build strong neighborhoods, but what I do is better,” she said. “I hand first-time homeowners their keys. That’s the icing on the cake.”