OKC mayor-elect David Holt’s job begins April 10, but planning for leading the city through the next four years is well underway 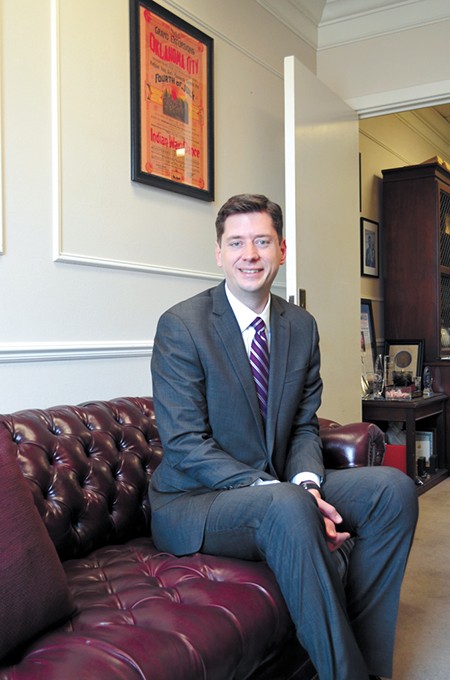 Over the next two months, pages and pages of notes — ideas from citizens on how to improve Oklahoma City — will occupy mayor-elect David Holt’s time. For nearly a year, the state senator crisscrossed the city, meeting with folks of all ages, professions and socioeconomic statuses as well as different races and ethnicities in his quest for mayor.

Holt’s platform focused on police and fire protection, streets and infrastructure, education, quality of life and diversity. Often, the conversations went beyond cookie-cutter municipal issues. Citizens poured out their ideas and dreams for Oklahoma City. Some were good, and some were bad. The good ones, which Holt said were many, made his notes.

Two days after Holt won with more than 78 percent of the vote in a three-way race for mayor, he named his notes as the starting point for building his plan.

“I probably have eight years of work already, but we will think about it in terms of four,” said a jovial Holt. “Any great endeavor requires a plan to be successful. I’ll have a plan by the time April 10 arrives. Great presidents, governors, mayors and other executives don’t just show up on day one and wait for events to happen to them. They enter with a strategy, a plan and a vision. …The job begins April 10, but the planning begins today.”

Holt will return to City Hall after an eight-year absence to begin his four-year term. The former chief of staff for Mayor Mick Cornett, Holt will be sworn in as the City of Oklahoma City’s 36th mayor.

Holt stands to inherit a city in good shape: a growing economy, an efficient and lean city government, new tax increases plugging additional dollars into public safety, the winding down of a successful third installment of the Metropolitan Area Projects (MAPS) program, etc. There are no troubling spikes in crime, no scandals at City Hall and no line of citizens expressing grievances to the council at meetings.

There was no campaigning to fix Oklahoma City. Instead, Holt presented himself to voters as the candidate to maintain the “visionary leadership” in the mayor’s office. After all, he served in the mayor’s office for five years during which MAPS 3 was discussed and developed. The second part of his message was to take the city’s momentum to another level.

“The overall picture of the city is not dire; it is really good,” Holt said. “As I talked about in the campaign, you can’t stop investing in yourself, which is why I think we should have a MAPS 4 conversation. And I think there are some areas that are a little bit dire. I think that’s the state of the city’s education system and how people perceive it. Also, I think it’s the current mobility for people in certain groups of our city to participate in the decision-making process. I think that is something we need to work on. People on the south side, the Latino community, the African-American community don’t feel a part of our momentum. We need to work on that. There are challenges.”

Holt said he is committed to working with public education leaders for improvement; however, the school systems and the city government are separate entities. When it comes to increasing diversity in city government, Holt wants to use his appointment power on the city’s boards and commissions to bring diversity into the decision-making process.

It’s hard to say what will be Holt’s first major action or vote when he begins to lead the eight-member nonpartisan council come April 10. There’s a good chance it could involve MAPS. In September, OKC voters endorsed the extension of the 1-cent MAPS sales tax for streets over a 27-month period. Holt takes the reins four months into the new tax.

MAPS initiatives, which are designed around the notion of transformative projects, require time, and lots of it. For instance, Cornett kicked off the MAPS 3 conversation in his January 2007 State of the City address. Nearly two years later, in December 2009, voters approved the $777 million proposal.

The city has a history of placing MAPS programs on ballots months before the tax ends. Holt sees the city following the same model for MAPS 4. As it stands, the city is already a few months behind on initiating the public conversation, the first step of shaping any MAPS proposal.

With fewer months to plan the fourth installment of MAPS, Holt will likely push for the MAPS 4 conversation with a sense of urgency early in his term. While he hasn’t named any project ideas of his own, he has expressed support for it going a different direction if it maintained its core characteristic: transformative capital projects. Either way, he wants the citizens to dream big and participate in the conversation.

“I want the most inclusive process that we’ve ever had for this,” Holt said. “I want every community in this city to have a seat at the table on this. We are going to do every communication method that there is to get everyone’s feedback and involvement.”

At 39, Holt will become the youngest elected mayor of a city with more than 500,000 people. Ninety miles north of Oklahoma City, G.T. Bynum serves as mayor of Tulsa. Like Holt, Bynum was elected at 39.

Months from now, Oklahoma’s two largest cities will be served by mayors under the age of 45. Both entered their elections with past public service experience. Bynum served as a city councilor. These mayors are friends whose lives first crisscrossed more than a dozen years ago as staffers in Washington, D.C. Holt sees a unique opportunity for Oklahoma City and Tulsa to partner on initiatives and present a united vision for the state’s urban areas.

“I think it’s another great opportunity for our two cities and Oklahoma,” Holt said. “If you look at the challenges that seem to face our state, which are kind of hurled at us by the Legislature and our state government, I think it is comforting to think you could have two cities united in their leadership as G.T. and I will be. We really need the two big urban centers of Oklahoma to be linked as closely as possible if we want to have any luck in trying to persuade the Legislature to do what it needs to do with cities. You will certainly have that unity with Mayor Bynum and I.”