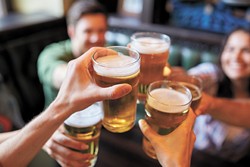 OKC Midtown Rotary Club was founded in 2009 with the mission to reach out to young professionals and redefine the stereotype of a rotary club meeting.

Its millennial outreach is on full display Feb. 23 at Tower Theatre, 425 NW 23rd St., with its annual fundraiser, Spelling Bee(r), which invites attendees to compete in a spelling bee for a $500 grand prize while enjoying beer from six local vendors. Guests must be 21 or older to enter.

Those in attendance are not required to participate in the spelling bee. There is a raffle, a photo booth and food catered from Pub W to enjoy while watching contestants try to spell words carefully selected by the club’s committee while under the influence.

“It doesn’t end until the last speller is out,” chapter president-elect Ian Dauteuil said. “The last two spellers are two smart people that’ll go back and forth for a while. It’s fun to watch them go back and forth. We try to have it wrapped up by midnight. That’s a lot of beer you can drink between 6 p.m. and midnight. So you definitely get your money’s worth.”

In its eighth year, the fundraiser is the biggest opportunity to raise funds for Midtown Rotary’s initiatives, which are focused on supporting the arts in public education. Spelling Bee(r) has raised about $30,000 over the last five years, Dauteuil said, but for every dollar raised by Midtown OKC, Rotary District 5750 matches with $2, which means approximately $100,000 impact for the community.

Midtown OKC’s biggest project is to work with The Foundation for Oklahoma City Public Schools to determine schools and art programs in need. Its biggest effort was donating $18,920 to install a 1,300 square-foot padded dance floor at Southeast High School.

“The dance program is huge there,” Dauteuil said. “Students were listing it as one of the only reasons they come to school. It helps motivate and keeps them enrolled.”

The fundraiser’s move to Tower Theatre will allow the rotary club to save on catering expenses for the event compared to its previous home at Will Rogers Theatre & Event Center, which Dauteuil said he hopes will lead to more money to be invested into the fundraiser.

Tickets are $45-$50. Guests will have an opportunity to bid on a silent auction that will include lots of art and packages from sponsors.

OKC Midtown Rotary Club has 45 members with a median age of 34 and meets 6-7 p.m. every Tuesday at James E. McNellie’s Public House, 1100 Classen Drive. International Rotary club is a global network of 1.2 million Rotarians that provides a variety of humanitarian services in a non-political and non-sectarian manner.