OKC Phil transports music-lovers to the Wild West on Sunday 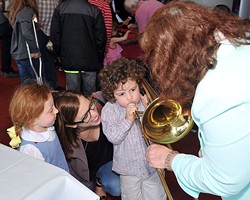 The Wild, Wild West, an hourlong selection of cowboy- and native-inspired orchestral pieces ranging from William Tell Overture to “Orange Blossom Special,” is the first concert in OKC Phil’s annual Discovery Family Series, which aims to make classical music accessible to children aged 4 to 13. The show begins at 2 p.m. at Civic Center Music Hall, 201 N. Walker Ave., but the fun starts a full hour before in the lobby.

“The scene in the lobby is a really wonderful part of these shows,” said Susan Webb, OKC Phil marketing director. “We have a family-friendly, interactive experience that precedes each concert where we fill the lobby with things the kids can get their hands on. They get to not just watch, but be a part of it.”

Children are encouraged to come dressed in their favorite Western wear, and in addition to meeting the performers and conductors, aspiring virtuosos will be able to tune, blow or bang away on the classical instrument of his or her choice in the Instrument Playground.

“It’s actually part of the Philharmonic’s mission to reach young audiences with quality music,” she said. “When the orchestra was restructured in 1990, it was with a real, service-oriented focus. We asked ourselves, ‘How can we bring the joy of orchestral music to not only our current patrons, but our future patrons?’”

OKC Phil has renewed its focus on local outreach and “orchestrating passion.” In addition to the Discovery Series, the orchestra plays two free youth concerts each season that see as many as 17,000 Oklahoma City students bussed in from every corner of the state.

It also teams up with local businesses and organizations to promote music education, and Webb said several community partners (like the National Cowboy & Western Heritage Museum, sponsoring the Instrument Playground) will have a presence in pre-concert lobby festivities.

Native American culture also will be prominently featured during West. The bill promises music from “Native inspirations to Western trail rides,” and Osage and Cherokee actor, composer, author and musician J.C. High Eagle will accompany the orchestra on a native flute for a portion of the show.

Webb said the series is just another way to make orchestral music come alive for everyone.

“You know, with budgets being what they are at a state level, with arts programs being cut, this is just something we need to do,” she said. “We know we can’t totally fill the void, but we are very dedicated to working with other organizations and community partners to make music an important part of every Oklahoman’s life.”