Since 1991, Oklahoma City Philharmonic has dazzled its fans with an original Christmas show that has grown so large that its coordinators hardly have time to relax after its closing.

Music Director Joel Levine and director Lyn Cramer didn’t have much time to decompress after last year’s production of The Christmas Show because the bell toll to begin work on this year’s show, which runs Nov. 30-Dec. 2, had already begun to ring, said Susan Webb, OKC Phil’s marketing director.

“[They] start putting their heads together immediately after the other show closes,” Webb said. 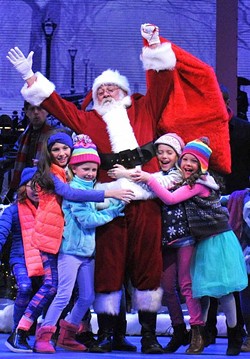 The culmination of a year of planning pays off with a 2017 performance highlighted by Broadway star Elizabeth Stanley, who has Broadway starring credits in Million Dollar Quartet, Company and Cry-Baby and the first national tour of The Bridges of Madison County.

“She’s quite the heavy hitter coming in from New York to grace our stages,” Webb said of Stanley, who will perform with the Philharmonic Pops chorale, the Mistletoes dancers and Santa K. Claus himself.

A mixture of secular classics like “Jingle Bells” and “I’ve Got My Love to Keep Me Warm” and sacred songs like “The Lord’s Prayer” and “Joy to the World” will regale the audience. The show opens with a big sleigh ride opening complete with Santa’s North Pole workshop.

“Santa’s role is much bigger than in previous years,” Webb said. “We have a fantastic Santa who brings color and light to the stage. … If musical theater fans love ‘Hello, Dolly,’ just wait until they hear the rendition of ‘Hello, Santa.’”

OKC Phil added the Letter to Santa segment to the program for the first time in a few years, thanks to popular demand.

“People love stories from children and other people that really remind us Civicwhat the essence of Christmas is really about,” Webb said.

Of course, the crescendo of the entire performance — the kick line of tap-dancing Santas — will remain unchanged.

“[It makes] everybody from 3-year-olds to all the way to my 86-year-old mother laugh and giggle with joy,” Webb said.

With more than 25 years in the community, The Christmas Show has become a staple for many fans in Oklahoma City. Webb noted that she sees people who grew up coming to the performance now bringing their own children. She said it is unique for Oklahoma City to put on an entirely new and original Christmas production every year and the organization draws inspiration from the Boston Pops orchestra’s holiday performance.

“The Boston Pops had their holiday show, and the community loves it so much that it has grown to weeks of performances,” she said. “That’s the level of growth that we’re hoping for at our unique gem.”

“You walk into the civic center and brush off the hustle and bustle of the season so that you can be relaxed and absorb the environment. The music transports you back to your childhood or becomes an iconic moment in a child’s life,” Webb said.