Even those who do not personally listen to podcasts know someone who does. At a rate that seems to be constantly climbing, people are no longer simply consuming the audio-oriented, often longform web shows, but producing their own.

Podcasting is not only a national trend; it’s a local one as well. Oklahoma has many locally based shows that range from comedy to cooking, news and everything in between.

Oklahoma Gazette recently caught up with the hosts of three different Oklahoma City podcasts to learn more about what it is like to be a podcaster in the Sooner State.

Since Travis Tester started the Inside the 405 video podcast series with co-host Mason Lehman in August, he has gotten pretty bold about asking questions.

The show’s on-camera host was very curious as a child. Tester is also a local DJ, producer and adjunct professor at the Academy of Contemporary Music at the University of Central Oklahoma. He now channels his natural sense of wonder at friends and strangers when he is not talking to Inside the 405’s guest of the week.

“For a long time recently, I wasn’t really asking very many questions of many people,” Tester said. “I was kind of in my own little world, so this is kind of like reverting back to when I was a child.”

Inside the 405 is a show about “who does what around OKC.” Tester and Lehman (who hosts the show off camera and assists in video production) invite a new guest onto their show each week. Guests are prominent locals ranging from rappers Chief Peace and Miillie Mesh to Oklahoma Shirt Company’s Justin Lawrence and Amy Wopsle.

Lehman said the podcast’s concept was born out of a desire to bring a longform interview show to the local level. There is no limit to whom they can bring on the show as long as that person is having success in their given field.

Part of Inside the 405’s allure is insight into the moves people have made to find success in their area of interest.

“I love the host as the moderator,” Lehman said, “but getting the information out of the guests is so key.”

Tester said outside of the city’s mainstream media outlets, local celebrities and figures of influence do not have many platforms for outside exposure. And even if someone manages to get a newspaper or television interview, it is often a condensed segment that does not give them a chance to show off their whole personality.

“This is a little more accessible to some people,” Tester said, “but at the same time, we’re trying to keep the caliber of the guests pretty high.”

A major, but sometimes neglected, part of every podcast is promotion. Inside the 405 has a strict routine of video clips, still photos and quote cards it posts on its various social media accounts to promote each new show throughout a week.

When the weather is nice, Tester and Lehman can also be spotted at local festivals and events, shooting man-on-the-street segments for their social media accounts. The segments are also a great way to network with the community and raise brand awareness among those who might be interested in the show. Tester believes making connections in person will eventually lead to Inside the 405’s larger breakout.

In 2018, Tester and Lehman hope to start their own podcast label, bringing other, more niche shows under the Inside the 405 umbrella. They also want to help new hosts realize their podcast dreams.

“We have the cameras and the mics,” Tester said. “We could come and make your show a reality.” 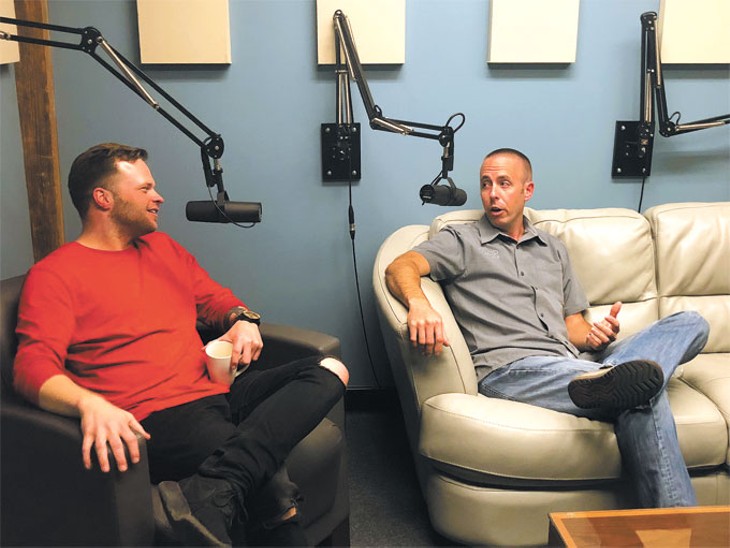 Localites co-host Anna Farha is not shy about acknowledging the forerunners to her show tracking local event and business happenings.

“I often liken us to an audio version of the Gazette,” she said.

Farha hosts The Spy FM’s weekly podcast series with Kayla Coffey. Though they take it as a compliment whenever people compare the show to Oklahoma Gazette’s long-standing, hyper-local focus, they also agree that the two outlets have their differences. Localites’ goal is to keep people up-to-date on events and business openings or closings that occur throughout the year.

“It can be really hard for people to keep up with everything that is going on and all the changes,” Farha said. “We want it to be an easily digestible thing for our listeners.”

Localites put out its first episode Aug. 3. They record the show each week in The Spy’s studio. Past episodes have included previews of the fan convention Wizard World OKC, Lyric Theatre’s A Christmas Carol and the opening of Film Row’s The Jones Assembly.

Coffey said the show was partly born out of a Twitter conversation in which someone suggested The Spy add more female hosts. Farha and Coffey took the opportunity to pitch their own idea for a show to owner Ferris O’Brien, who liked the idea and, at the same time, was looking to add to the station’s podcast presence.

Farha and Coffey said they like that the podcasting community is pretty inclusive of female hosts, though to what degree might depend on the kind of podcasts to which one is listening.

“Most of the podcasts I listen to are with women,” Coffey said, “but that may be because of the things I’m interested in.”

One of the biggest challenges the Localites hosts come across is timeliness. They record the day before they publish an episode to keep their news as fresh as possible. Coffey said they also try to schedule guests and episode topics weeks in advance.

“We book out ahead because we like to stay on top of it,” she said. “I think that helps people too if they know a month or two ahead of time.” 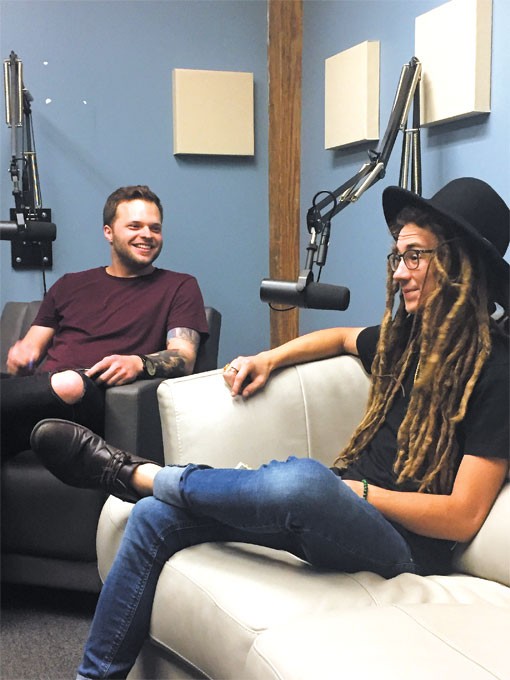 Christian rock, pop and rap are consumed by thousands of young people around the world. But as they get older, some fans turn toward more secular music and entertainment options, if not away from organized religion altogether.

So then what does one do with all the knowledge acquired and time spent dedicated to following their favorite Christian band? For local comedians Heath Huffman and Alex Sanchez, the logical thing to do with that ancillary knowledge was to start a podcast.

The Praisedown with Heath and Alex is part comedy podcast, part serious analyzation of Christian music and media.

“It’s about reconciling with that part of who you are,” said Sanchez, who was once a dedicated fan of acts like TobyMac, Kutless and FM Static.

The show naturally came together shortly after the two friends discovered they came from similar church-centric upbringings. Huffman said he grew up as a particular fan of the Christian rock band Skillet.

“It was good music to be in seventh grade and draw anime to,” he said.

It would be an obvious move for two comedians to get on a podcast and unilaterally trash Christian pop, and while Huffman and Sanchez reserve the right to drag the music that deserves it, the show strives for honest criticism.

“I was really into Relient K because I wasn’t allowed to know who blink-182 was,” Huffman said. “And for what it’s worth, Reliant K is fine. [Band co-founder and frontman] Matt Thiessen writes cool songs. He’s not a bad songwriter.”

The show typically runs between 90 minutes and two hours in length. Huffman and Sanchez will bring on a guest, talk about their backgrounds with church and Christian music and then offer their review of a given album or artist. Sanchez said the worst-reviewed music is usually that which obviously panders to its audience.

“The criteria for what makes it bad is if it’s insincere, not if it’s corny,” Sanchez said. “Corny is OK. Music is supposed to be kind of corny.”

Podcasting is popular among comics looking to either practice their skills or, for more established stand-ups, as an added source of revenue and exposure. Huffman said hosting the show feels like a greatly extended version stage time, but without audience feedback.

A podcast can be good practice for comedic riffs, but what about being serious off the cuff? Huffman said the most challenging part of The Praisedown is giving an eloquent music review.

“Being funny is the easy part, in this case,” he said. “When it comes time to rate an album, I open my mouth and words don’t come out, that kind of thing. That’s the primary struggle.”

Both Huffman and Sanchez said the key to their podcast is having someone who dedicates their time to editing and promoting the show. Jill Falter, Sanchez’s girlfriend, is a media production student at the University of Central Oklahoma and dedicates her time to The Praisedown’s technical side.

For now, the show is pretty laidback and does not impose a rigorous upload schedule on itself. Still, they post new content nearly every week.