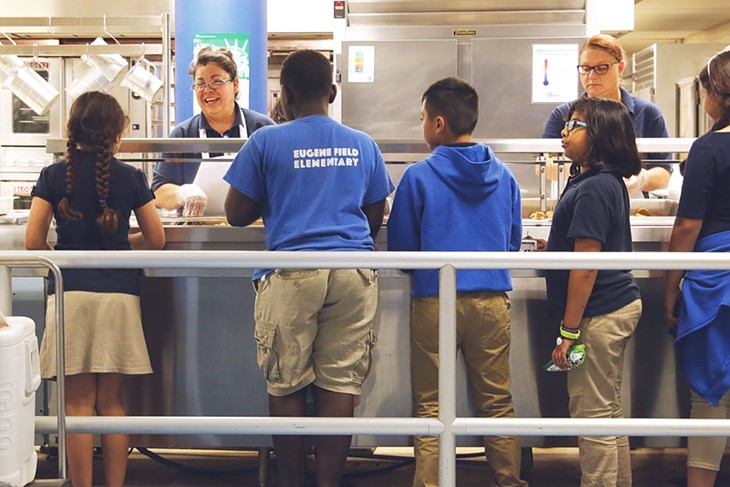 A cafeteria worker sits behind a cash register at the end of the lunch line at Eugene Field Elementary School, but instead of accepting meal payments, she counts the number of students who fill their trays with proteins, grains, fruits, vegetables and a milk carton.

Oklahoma City Public Schools’ (OKCPS) school nutrition services director Kevin Ponce explained the system in which students enter their ID numbers via a pin pad to complete their breakfast or lunch purchases hasn’t been used in three years at Eugene Field. In 2014, the northwest OKC school joined the Community Eligibility Provision (CEP), a federal funding program that allows schools in high-poverty areas to serve free meals to all students.

“No matter what the economic situation is for a student’s family, they don’t have to worry,” Ponce said last week as he visited the Eugene Field cafeteria. “It’s an unbelievable program.”

When the 2017-18 school year begins Aug. 1, all 44,000 OKCPS students will be offered free and healthy breakfasts and lunches at all district school sites. Earlier this month, district leaders announced the switch from the National School Lunch Program to CEP.

“By offering every student breakfast and lunches, healthy meals become an integrated part of the school day,” Superintendent Aurora Lora said. “Research has shown that students who eat breakfast and lunch on a daily basis increase their attendance, improve their behavior and perform better in school. By providing healthy school meals, OKCPS is making sure that our most vulnerable children are not going hungry.”

For more than 70 years, the federal government’s National School Lunch Program has provided meal assistance to in-need families by offering a low-cost or free lunch to children each day. In the 1960s, the School Breakfast Program debuted as a tool to provide the first meal of the day to low-income students.

In 2010, under the Healthy Hunger-Free Kids Act, Congress created the Community Eligibility Provision (CEP), adding another child nutrition program to the United States Department of Agriculture to address childhood hunger.

Unlike the well-known school lunch program, in which school administrators collected applications from parents and guardians to determine who qualified for free or reduced-price meals based on family income, CEP applications are completed by individual schools or districts. The program is available to schools and districts in which 40 percent or more of the students qualify for free meals under other programs, such as the Supplemental Nutrition Assistance Program (SNAP, formerly known as food stamps) or Medicaid. CEP schools or districts are reimbursed for the cost of meals but still pay labor costs.

Districts can apply for CEP through June 30.

In a state where one in four children struggles with food insecurity, local anti-hunger advocates like Effie Craven believe OKCPS could set off a domino effect with more districts completing applications for the federal program.

Since CEP’s launch, Regional Food Bank of Oklahoma and Community Food Bank of Eastern Oklahoma have played important roles in educating schools about the new option and sending them to the Oklahoma State Department of Education — the state agency that connects schools to CEP, said Craven, who serves as the state advocacy and public policy director for both food banks.

“We know that students rely heavily on the federal nutrition programs,” Craven said. “Our hope is that as the largest school district in the state supports CEP, it pushes those smaller school districts to look into the program and see if it’s a good fit for their schools.”

Through their efforts to end child hunger, both food banks joined schools to stock food pantries and distribute backpacks filled with food for the weekends. In the summer, community centers, parks, camps and churches provide meals for children and teenagers through the food banks’ summer feeding programs.

“The programs that the food banks operate are really just a supplement,” Craven said. “They are not solutions by themselves. This school program feeds so many more kids day in and day out. It’s really the key solution to ending childhood hunger.”

As Ponce walked across Eugene Field’s cafeteria, a smile broadened across his face. Many of his school meal goals and priorities were realized through CEP, and he said he looks to see continued benefits as 78 OKCPS sites participate.

Under CEP, there is no reason for students to skip meals. In upper grades, there can be an underlying stigma attached to receiving free and reduced lunches. Because of peer pressure and bullying, these students often opt not to go through the lunch line.

When a youth went through the lunch line with no cash or money left in his or her electronic meal account, which often also listed a negative balance, the staff fixed an “alternative lunch,” usually a cheese or peanut butter sandwich. Sadly, that’s when they can become targeted and shamed, a problem thrust into the mainstream after recent social media posts went viral.

With CEP, the stigma has disappeared, said Ponce, who no longer hears reports of lunch shaming at CEP school sites. Without the extra burdens, cafeteria staff can focus on what they do best: providing healthy meals to students.

“We want to make sure we do our part,” Ponce said. “We ensure students are ready for the classroom.”