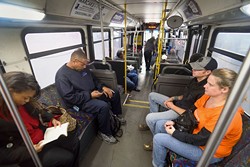 As Oklahoma City Public Schools expands student choice with alternative and charter schools, the district’s transportation budget has dwindled due to deep funding and budget cuts enacted earlier this year by the Oklahoma Legislature. That creates a problem. As bus routes are consolidated and schools adjust operating hours, some families now utilize alternative transportation to get their middle- and high-school children to school.

An Embark-issued Haul Pass photo ID allows qualified riders unlimited use for a $10 monthly fee. Cards are shown and swiped as students board transit buses.

OKCPS middle and high school students must first validate Haul Pass applications, available on the website, with a school administrator. Next, they must be submitted in person at Embark’s Downtown Transit Center location at 420 NW Fifth St. A youth ID card is issued with the pass.

Learn more and apply at embarkok.com and then click “Use,” then “Programs,” then “Haul Pass” tabs.

“Many city transportation systems only allow students to use their student passes on school days and during specific time windows,” Scroggins said. “Our card allows students to use the system … to go anywhere [transit buses run].”

In its first year, Embark reached out to Emerson High School, the district’s oldest alternative school. Its student population’s needs are diverse, as it includes nontraditional and working students and young parents, among others.

The Haul Pass program proved popular and successful, and OKCPS administration and Embark’s governing board approved expanding the program districtwide.

Many Embark buses also feature Wi-Fi, and White said it allows access for many Haul Pass users who might not have internet access at home. Also, the access saves students time by allowing them to work on homework while riding to and from school or work.

“What students found in the pilot year and since is that the bus system is safe and reliable,” Scroggins said. “We think that if they learn the advantages of public transportation early in their lives, they will continue to do so into the future.”

» Valid only for OKCPS students

» For school, work and leisure use