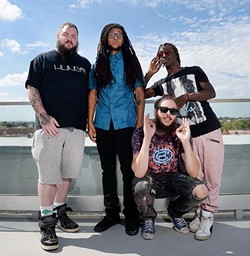 Though the group provides plenty of its own verbal acrobatics, to see the Sativa Prophets hip-hop collective perform live is more than watching a group of emcees speaking their best rhymes into a microphone. It is high-octane performance art.

“You can ask any one of [the other Prophets] what my dreads taste like, and they’ll tell you,” Huckwheat said during the group’s recent interview with Oklahoma Gazette.

With the onstage antics of the group’s three lyricists, it can be easy not to notice the group’s fourth member, producer and DJ Igloo Panda. The stoic foil to a hip-hop hype man, Panda says little but acts as the primary beat architect behind most projects of which the Prophets and its members are part.

“I’m basically Oklahoma City’s most turned-down DJ,” he said. “Everyone can’t be crazy.”

It might be Panda’s job to keep cool behind the decks, but it is the other three’s job to put on a full, entertaining show. They rarely disappoint.

“You don’t leave our shows dry,” Deli said. “If you’re not sweating as much as I’m sweating, you’re not having fun — hands down, period.”

Sativa Prophets has been an established brand in the local hip-hop community for several years, and while they have released group compilation records, Into the Clouds is the unit’s debut album of all-original material.

Each member already has one or more solo albums under their belt, though they frequently collaborate in the studio and perform each other’s songs onstage.

An existing familiarity means Into the Clouds never feels like an unnatural patching together of pieces that don’t fit. On songs where all or multiple members perform, the emcees frequently switch off vocals in a way that harkens back to 1980s and ’90s hip-hop groups like Beastie Boys and Onyx.

Hip-hop groups and posse cuts still exist today, but modern technology and recording practices make it easier for emcees to write separate, full-length rap verses that are stitched together later in the studio.

“I think a lot of people just don’t write together,” Malone said. “You’ll just get somebody who says, ‘Well, I got this verse already written,’ and then you write something to their part.”

The back-and-forth banter found on Into the Clouds gives the album a more cohesive and organic feel. Despite apparent chemistry, there is actually a steep divide between the creative processes between members. Panda and Deli often work as a pair because they share a preference for recording their material in one or two takes, taking what happens naturally and moving on to something else. Huckwheat and Malone, on the other hand, tend to put a lot more time into every detail until they arrive at their desired sound.

Those differences never turn into too much of an obstacle when their styles come together for a song. Instead, the group’s variety of perspective propels it to new heights. Take Into the Clouds’ tenth track “No Limit,” a collaboration between Deli and Malone that features a grittier, trappier aesthetic than the latter usually appears.

“I was like, ‘Dude, this is not what I would normally do,’” Malone said. “But it inspired me in a way that I wouldn’t normally write. That’s why I like collaborating so much, especially with them. We just elevate each other.”

The group’s live show is sometimes called one of the best in the city’s music scene, which gives many the impression that their performance routines are meticulously rehearsed. They’re not.

No Prophets show is exactly the same, and nearly everything seen onstage comes naturally in the moment.

Huckwheat said the potential they could reach if they practiced regularly could be mind-blowing.

“Could you even imagine?” he asked the rest of the Prophets.

“I don’t think it would be as cool,” Malone answered.

Part of the fun might be in each show’s spontaneity. The Prophets have a few premises they repeatedly revisit onstage. For example, in the middle of the show, they will all pretend to die slowly and lay still on the stage for several minutes before “resurrecting” themselves and jumping back up in exuberant life.

During a show in Tulsa, the group looped a beat and asked people in the audience to come onstage and rap their own verse into the mic. After several excited fans gathered onstage, they were shocked to see the Prophets playing dead on the floor around them.

“They were so confused,” Deli said. “They couldn’t have been more lost.”

Like the group’s music, a natural synergy between members helps each performance appear highly orchestrated. Huckwheat said the chemistry carries over on a personal level as well.

“We’re always in unison without ever having to say anything,” he said.

When Sativa Prophets performed with rock bands and acts from other genres in the past, Panda said he could sometimes see them mocking the group as its rappers took time to stretch before the show.

“Then halfway through the set, you can tell they’re like, ‘Oh, these guys are dope,’” he said.

The days of local bands looking down on the hip-hop collective are coming to an end, if they’re not already over. Aside from an album release show that features three unique rock bands, Sativa Prophets is also planning a future collaborative mixtape with local bands. So far, they’ve gathered interest from Horse Thief, Bowlsey, Rousey, Haniwa and more.

“I think it’s cool that a lot of rock bands fuck with us,” Panda said, “because, to be honest, a lot of rock — or just musicians in general — don’t really fuck with hip-hop too much. It’s cool, because I feel like maybe we can kind of change their mind a little bit.”

Each Prophet either knows how to play an instrument — be it drums or guitar — or comes from a musical background that was not just hip-hop.

“We’re four different instruments in ourselves,” Huckwheat said. “Our body movements; the way that we’re using our voices; what Panda’s cutting; me and [Rod] headbanging faces off.”

That understanding helps expand the group’s musicality. Whereas some acts in local hip-hop don’t look far beyond their respective scenes, Sativa Prophets sees music as music.