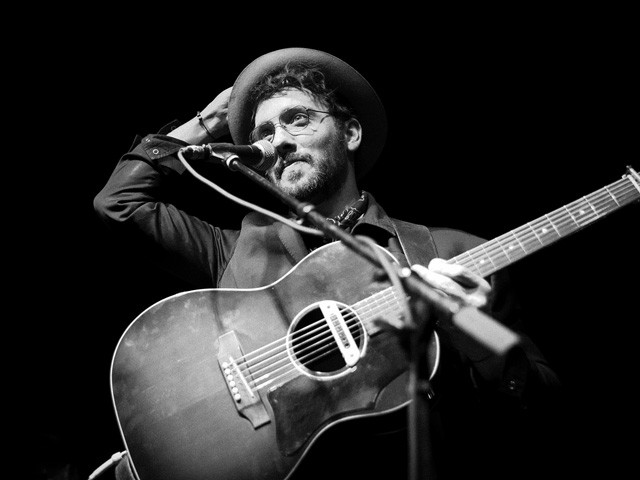 Jason Scott is taking his newest EP out of the living room and to the big stage.

Scott, a father of two young boys, started his path in music singing in church and eventually became a worship minister. He eventually left his work with the church to pursue his own career in music, both as a solo artist and as a producer and technician for his ON Studios (pronounced “oh en”) production company.

Oklahoma Gazette recently spoke with Scott to talk about his upcoming release show and personal background in music.

Oklahoma Gazette: How long have you been working on this show at Tower Theatre?

Jason Scott: I’ve had that lined up for several months. In fact, before I even got the Tower, we were originally trying to book it at The Blue Door and the date didn’t work out or something like that. So, I got to talking with the Tower Theatre and they were willing to host.

Scott: No, it certainly wasn’t intentional. It’s my first EP. I felt like I just picked some of my songs that were the most ready. Travis Linville produced it with me, and I had probably 10-12 songs and he helped me go through the ones that we eventually decided to put on there. So it wasn’t intentional. There is a little bit of variety, but I feel like it’s still cohesive enough. They get kind of bluesy at times and a little bluegrassy. But it wasn’t anything premeditated.

OKG: How long have you known Linville, and how did you get to work with him on this record?

Scott: I’ve known of Travis for a long time. He has been a staple in Oklahoma’s music scene for a long time. I was actually a student at ACM (the Academy of Contemporary Music at the University of Central Oklahoma), and he was one of the adjunct professors there. He taught a songwriting class that I had. I actually wrote a song on the album, “When I’m Getting Ready,” in his songwriting class. I was looking for a few different people to help me produce my record, and just getting to know him through that medium and knowing his music, he was an immediate, perfect fit for the style and all that stuff. It all kind of worked out perfectly. He had a Kickstarter going on then for his record [Up Ahead]. One of the incentives on there was a five-song EP that he would help produce, and I was able to support that while he was able to help me with the record.

OKG: What got you started as a musician?

Scott: Well, I grew up in the church — a pretty religious sect of the church. I grew up singing in the church, so I’ve always been musically inclined. I was a worship pastor for several years, and I sort of got away from all of that. That was like four, maybe five years ago. I’d done some songwriting as a worship pastor, and to be honest, it was the only thing I really have training at as far as anything I’m good at. When I got out of that frame of mind, I started pursuing my own stuff. It took a few years to get my feet under me and figure out how I wanted to write it, but that’s the genesis of that.

OKG: In terms of your songwriting, do you have any kind of process?

Scott: Yeah; driving. I’ve got a couple of boys, so writing around the house is not something that’s ever a real possibility. I actually own my own business. We do live music for weddings all across the Midwest, and because of that, I can do a lot of driving. I’ve been doing a lot of driving for several years, and that’s really my main mode; just getting behind the wheel of a car and zoning out as safely as possible. That’s a majority of what I write. I’m always looking for songwriting inspiration, so I’m not going to say it’s exclusive to that, but the majority of the time — as far as crafting lyrics and not just ideas for structure and hooks — the majority of that happens in the car.

OKG: How long have you owned that music studio?

Scott: The studio has been up and running for about a year. Before my second boy was born, I’d always been messing around with audio and production and stuff. The company’s called ON Studios. That’s been a concept for probably seven of eight years. Really just within the last year have I been in a position where I can make quality recordings.

OKG: Is that an aspect of music you really enjoy doing?

OKG: Where did you learn to do studio work? Was that something that was self-taught?

Scott: Definitely. I had a lot of self-teaching. And like I said, I was a student at ACM a couple of years studying production, and that really capped off a lot of the self-teaching I had been doing.

OKG: So which do you like more, music production or your work as a solo artist?

Scott: Well, I like to do both. I have a passion for both. I sort of got into production to do my own stuff. That’s why I’ve always been fascinated by it. But there’s so many great singer-songwriters who can’t afford big studios. There’s no reason now, with the technology available, that a tiny studio can’t produce a really rad record. I’ve sort of channeled it as another way to bring in income. I really do enjoy both sides of it, and they go hand-in-hand together.

OKG: Do you have any 2018 plans after this Tower show?

Scott: I’ve got a couple of gigs. We’ve got a couple of tours in the works. I’ll be at the Mile 0 Fest in Key West, Florida. A bunch of Okie artists are going there. And I’ve already started working on my second record. It’s going to be another EP. My goal for now is to just stick with EPs and try to get one, maybe two out a year.