OKC StorySLAM has a core following that shows up almost every month to share their five-minute stories with patrons of Saints.

While the unique storytelling event on the last Sunday of each month features a semi-regular group of fans and performers, its strength often lies in unsuspecting 16th Street Plaza District visitors who happen to stumble across the open mic series.

“What I really love is that there are people who are just there to listen, and then after a few stories, they’re like, ‘Well, I’ve got one,’” event founder Molly O’Connor said. “They get there with no intention of telling a story, and then they get up and bring down the house with something badass.”

There is a free and open sign-up for storytellers at the start of each event. Each participant’s story must be at least tangentially related to the night’s theme, usually left intentionally broad.

At the end of each event, the StorySLAM emcee reads each participant’s name and corresponding crowd applause is used to determine a winner. The prize for best story is typically a Saints gift certificate. O’Connor said they will also soon begin handing out “trophies” reconstructed from cheap thrift store finds. 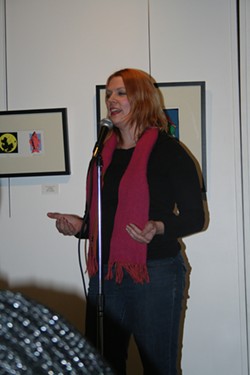 O’Connor is also assistant director at Oklahoma Arts Council. In the early 2000s, she was organizing a local storytelling festival for the council. She loved the unique event but noticed its audience was usually people from older generations. With inspiration from storytelling open mics in coffee shops and on college campuses — not to mention the storytelling KOSU program The Moth Radio Hour — she began hosting monthly storytelling events in 2005 at [Artspace] at Untitled.

The event ran for a few years before going on a hiatus, eventually returning in 2009 at artist Steven Kovash’s Istvan Gallery. That run continued for five or six years until the gallery closed, leading O’Connor to find the event a new home through personal connections at Saints. StorySLAM has been regularly held at the pub since June 2016.

The magic of storytelling often has the power to bring strangers closer together. With these personal stories acting as an icebreaker, O’Connor said it is not uncommon to see storytellers and the crowd linger in the pub long after the competition is over.

“A lot of times, people will stick around and talk to people that they didn’t know before the slam because they connected with their story,” she said.

In the midst of a volatile social and political climate, O’Connor said the opportunity to hear different people’s perspectives is as important as ever.

“I think storytelling is a really powerful art form,” she said. “Anytime you understand somebody’s story, it’s much easier to forgive and relate to somebody.”