OKC Thunder teams up with StitchCrew to launch Thunder Launchpad 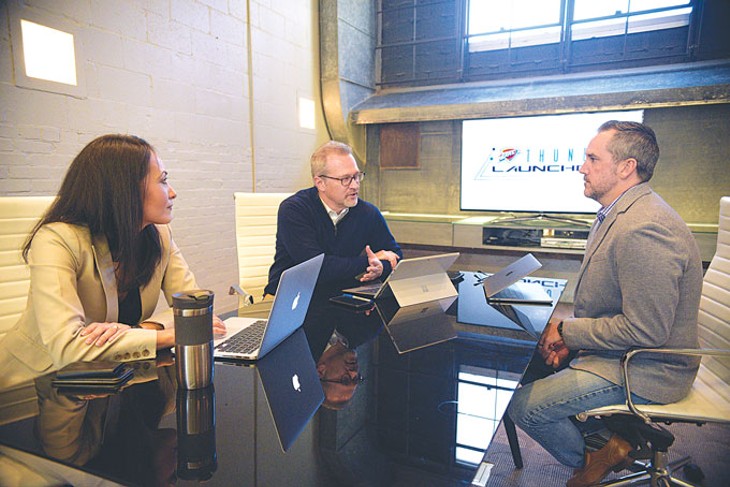 For Oklahoma City, the Thunder is more than a basketball franchise with its role in boosting the local economy, enhancing the city’s national image and uniting its citizens in civic pride.

A decade ago, when the team arrived, Thunder leaders, as well as civic leaders, saw it as a chance to prove that success could be found in a small market, whether the team wins on the court and large crowds fill the arena or otherwise.

The Thunder and the City of Oklahoma City rose to the occasion. The team made the playoffs in their second season, the Western Conference finals in their third and the NBA Finals in 2012. Simultaneously, nearly $1 billion in taxpayer dollars was invested in and around downtown, spurring further private investment and creating an eye-catching area with urban districts primed for entertainment, dining and living space.

Now, Oklahoma City’s entrepreneurs and startup tech community is working to prove that its emerging tech hub is only small market in name alone.

“A small market does not have to be a roadblock,” explained Chris Lucas, co-founder of StitchCrew, an Oklahoma City-based company that matches technology startups in the Midwest with venture capital firms seeking to expand outside traditional tech hubs.

Such a notion resonated with the Thunder, explained Thunder senior vice president of sales and marketing Brian Byrnes. Over the last year, the Thunder, with the help of StitchCrew, worked toward the opening of the Thunder Launchpad, 309 NW 13th St., a space intended to bolster innovative and entrepreneurial capacities.

With its own startup accelerator program, Thunder and StitchCrew leaders believe Thunder Launchpad will “cultivate, promote and encourage entrepreneurs and the startup community in Oklahoma City and help them advance to the next level.”

“We think the Thunder can have a huge influence, and our track record gives us the confidence,” Byrnes said inside Thunder Launchpad, located in the Monterey building. “It is a natural extension of our community investment.”

In recent years, startup accelerators have played an increasing role in the emerging tech ecosystem throughout the United States, partly because they benefit the startup as well as the investors. Unlike business incubators, accelerators are designed as highly intense and selective programs that offer a range of services and funding opportunities to participants. They are grounded in mentorship and peer-to-peer assistance with startups, or founders, working toward graduating after three or four months.

Investors, technology companies and other businesses aren’t the only ones taking note of accelerators. In 2015, MLB’s Los Angeles Dodgers made national headlines when it launched its own startup accelerator. The baseball franchise, along with New York-based advertising agency R/GA, was the first professional sports team to dab into a startup accelerator program. Since, more teams, like NFL’s Minnesota Vikings and NBA’s Philadelphia 76ers, have premiered similar programs.

While the Thunder follows suit, Byrnes explained the Thunder Launchpad is Oklahoma-grown and differs from others owned by professional sports teams. For instance, the Dodgers seek startups based in sectors of sports, technology and entertainment, which translates to new developing technologies in smart stadiums, fan engagement, e-sports, ticketing and more that could ultimately be utilized by the team’s ownership.

The Thunder Launchpad is not industry-focused. Rather, it’s “technology-focused and industry diagnostic,” said Erika Lucas, StitchCrew’s CEO and founder. StitchCrew will operate the accelerator where founders work on developing ideas pertaining to sectors of energy, financial services, health care, government, education and agriculture.

“It’s an opportunity for founders to go through a fast-paced training program to get their companies from whatever stage they are to being ready to provide a pitch deck to investors,” Erika Lucas said. “It is very mentorship-driven with peer-to-peer learning. We will also build a team around them with services. Our hope [is] by the time they graduate and have demo day, they will have an actual product to present as opposed to just an idea on paper.”

StitchCrew will accept applications for the Thunder Launchpad Accelerator through Feb. 25, with the 12-week program set to begin March 13. A second batch, or cohort, will launch later in the year.

While Thunder Launchpad is home to its accelerator program, it will also host events and programs intended to enhance technology education, ideation and networking. The goal is to foster the evolving tech community, even if they don’t participate in the accelerator.

“We will have the flexibility to host conferences, seminars and best practice, even hackathons where a group will collectively attack a problem faced by the business community over a few hours,” Byrnes said.

Thunder Launchpad debuts during the team’s 10th season, a fact not lost on Byrnes and other Thunder leaders. Oklahoma City’s embrace of a developing Innovation District and its efforts to attract new investment, retain local talent and create jobs initially attracted the Thunder to technology investment.

“We were very interested ourselves,” Byrnes said. “While we are an organization with playing basketball as the product and are a sports entertainment entity, we are also a global brand and are involved and exposed to so many opportunities in technology, whether it is artificial intelligence, VR or player performance analytics. We were naturally curious about technology innovation and marrying that up with what was happening in Oklahoma City and the state of Oklahoma.”

When the Thunder sat down with StitchCrew, they were pitched a plan to explore programs proven to foster the growth of tech in cities similar to OKC.

“Oklahoma City, we strongly believe, has all the assets and resources to make it happen here,” Erika Lucas said. “One of the reasons we decided to partner with the Thunder is because the biggest challenge is creating a culture of collaboration. We are going to have to work together and bring the resources together. We couldn’t think of a better partner that embodies collaboration and embodies corporate citizens than the Thunder.”

Thunder Launchpad has already received applications from founders. Local investors have also reached out to learn more. Both Thunder and StitchCrew leaders presented Thunder Launchpad as an ongoing initiative with its accelerator program expanding beyond two batches.

“It’s another piece to the economic puzzle in Oklahoma City that is growing, that is vibrant and that is forward-oriented,” Byrnes said. “We think that is an exciting place to be. This is the start of something that has great potential.”

Print headline: Accelerate; The Thunder are hosting a startup accelerator and more to grow tech innovation in Oklahoma City.