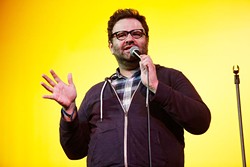 Those who enjoy peering into the dating lives of others or having a laugh at the confounding spectacle that online courting so often becomes should swipe right for OKC Tinder LIVE, a local comedy show that has a little fun at possibly the most well-known dating app’s expense.

The free show, which runs 8-10 p.m. May 25 at 51st Street Speakeasy, 1114 NW 51st St., is partially a live taping of the popular KOSU (91.7 FM) show The Dates of Our Lives and partially a comedy production that features a panel of local comedians making in-the-moment jokes and commentary based on activity from an actual Tinder account that’s projected onto a large television screen.

BradChad Porter opens the event with a brief stand-up routine, segueing into the Dates of Our Lives’ live taping with co-hosts Ryan Drake and Malory Craft. The hosts will have complete control of willing volunteers’ actual dating profiles. Comedian Spencer Hicks will be involved in a to-be-determined capacity.

The show idea grew out of Drake’s desire to do a live, on-location taping of their local radio show, which discusses dating culture by answering fan-submitted questions, bringing in guests and discussing odd dating news stories from the internet. A live Tinder show came to be after the duo read a story about the popularity of similar shows popping up across the country.

Though the show is called OKC Tinder LIVE, it is open to other apps like Bumble or Match. Still, Drake believes Tinder might have the greatest potential for cringe-inducing comedic chaos.

“Tinder was sort of the trailblazer, but it’s also kind of turned into a dumpster fire with the rise of other better, more niche apps,” he said. “There’s a whole lot of better apps that have better people groups because they’re aimed at certain demographics or different things. Tinder is the overarching, ‘Well, if it doesn’t work out, you can still come here and probably hook up with someone tonight, but it’s probably going to be terrible.’”

Drake is on the planning committee for the Blue Whale Comedy Festival in Tulsa and hopes, if a few Tinder shows go off successfully in Oklahoma City, to take the concept up Turner Turnpike for the esteemed comedy fest.

Drake assured Tinder LIVE will not devolve into a brutal roast of strangers.

“I don’t want people to think that our goal is just making fun of people,” he said. “We’ll probably do a little bit of that, but it’s not going to get bad. We have to keep it PG-13 because we’re recording part of it for the radio anyway.”

Because the show is live, there is a good degree of uncertainty involved. Still, Drake is confident it will be a lot of fun.

“The comics we have are so good, they can work with anything and make it funny,” he said. “I trust them.”