Brandi Davis saw a need and worked to meet it.

Davis, founder of OKC Urban Pride, has been active in Oklahoma City’s LGBTQ community for more than 10 years. She hopes to provide a place for urban and African-American members of the community with Urban Pride’s programming this year.

“I love going to Pride, but it doesn’t really cater to our cultural differences,” Davis said. “And there is a difference, you know, so that was kind of the need in the community.”

General admission tickets are $15-$20 at the door.

“They are welcome here for the weekend,” Davis said. “It’s just to help us make the over-21s feel comfortable and help us keep out underage drinking.”

Saturday’s events include the Living Proud outreach seminar, which begins at 11 a.m. in the Tower Hotel lounge, 3233 Northwest Expressway. Admission is free and open to people age 15 and older.

Doors open 9 p.m. Saturday for the Exotic Nights Shakedown at Russell’s Lounge in the Tower Hotel. Guests who purchase an ultra-VIP Pride Ride package can ride a party bus around the city before making a grand entrance at the event. Ultra-VIP tickets are sold out, but general admission and VIP tickets are still available. VIP tickets are $50 and include admission to all OKC Urban Pride events. Standard tickets are $15-$20 per event. 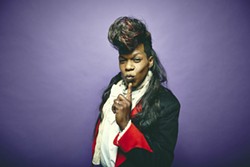 This year’s Urban Pride events are new, and Davis hopes to see them continue.

“We hope that we can make it a successful yearly tradition,” she said. “This is the first year of a whole weekend.”

OKC Urban Pride has been working to spread the word about their programming. Davis said she traveled out-of-state to raise awareness.

“It’s picking up a bunch of steam as we get closer,” she said.

The weekend’s theme is Respect Our Differences, a motto that Davis works to embody in her own life.

“That’s the need, the theme, the life,” she said. “It can go not just with the LGBT community and cultural differences but can go to anything. Respect everyone’s differences — this world would probably be a lot better if we just understood that you’re not the same as me and I’m not the same as you.

“We grew up differently, we have different things that we hold as valued, and if we respected each other’s differences in that, we could maybe make a difference, period.”

Davis said she wanted to highlight outreach and community during this weekend’s events. Leveaux and Liger will facilitate a roundtable discussion and Q&A session.

“They’re just great people that decided ‘Hey, there’s a need,’” Davis said. “One of them is a member of the community as well, so he’s taking his platform and coming to speak about entrepreneurship, different issues we deal with as being LGBT period, as being African-American and LGBT and being Caucasian and LGBT.”

Saturday’s workshop allows Davis to work with younger members of the community, giving her a reason to draw on years of experience.

“I feel like ever since I started this 10 years ago, I have always worked with the younger LGBT,” she said. “I welcomed the younger crowd that couldn’t get into regular clubs and gave them a place to feel welcome.”

She believes allowing a wider range of ages will help the community grow into the future.

“They are the future of Pride, you know?” she said. “Start them off right.”