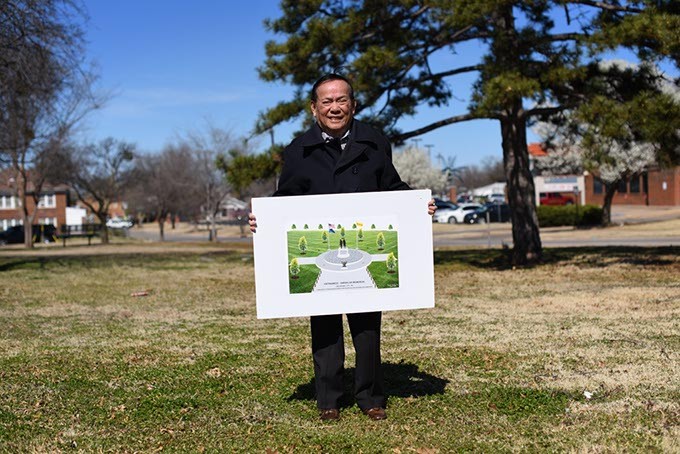 More than 40 years ago, Vinh Nguyen and his family escaped their native Vietnam by boarding a small boat headed for the South China Sea.

They spent 36 hours in the ocean before encountering the U.S. Navy’s 7th Fleet, a task force supporting the evacuation of South Vietnamese people after the fall of Saigon — the end of the Vietnam War.

“We didn’t know where we would go,” said Nguyen, who served as a lieutenant colonel in the South Vietnamese army during the war.

“Finally, we see a fleet. They rescue us,” he said. “I could not stay over there. I would’ve been killed. I helped the Americans.”

Nguyen and his family were rescued by U.S. naval forces on April 30, 1975. Four months later, the couple and their children arrived as refugees in Oklahoma City on the advice of a U.S. Embassy worker originally from Lawton.

At that time, like many South Vietnamese refugees to arrive in Oklahoma City, the area along Classen Boulevard from NW 23rd Street to NW 34th Street became home. In time, the new residents transformed the area with an influx of pan-Asian businesses, like restaurants, grocery stores and shops. Today, those businesses are no longer mainly mom-and-pop storefronts, but house dentists, optometrists and insurance and real estate agents.

As he stood near the entrance of the city’s Asian District, Nguyen spoke with pride as he discussed OKC and the United States, his second home. A graduate of the University of Central Oklahoma, Nguyen retired from the Internal Revenue Service and raised his children in OKC.

“It is my homeland here,” said Nguyen while he walked in Military Park, located at NW 24th Street and Classen Boulevard. “I call myself an Okie.”

Nguyen chairs the Vietnamese-American Community Oklahoma City and Metropolitan Area. Over the past seven years, he has worked to dedicate a monument here to stand as a symbol of American and South Vietnamese sacrifices for freedom in Vietnam.

The Military Park project would mark the first Vietnam memorial in an OKC park.

“Two statues,” Nguyen said as he viewed a rendering of the proposed monument. “One is an American solider and the second is a South Vietnamese solider. They will be side by side for friendship.”

He said he envisions a bronze memorial in front of three flags: an Oklahoma flag, an American flag and the flag for South Vietnam, three red stripes over a solid yellow background.

“Almost 2 million South Vietnamese died for the country and 58,000 U.S. troops, including 987 Oklahomans, died for freedom in Vietnam,” he said. “This will honor those who served.”

In 2009, Nguyen, representing the Vietnamese-American Community, proposed the monument and flag plaza to the City of Oklahoma City. He spoke of an idea and showed photos of similar memorials, such as the Vietnam War Memorial in Westminster, California.

With help from the city’s Office of Arts and Cultural Affairs, created about three years ago, Nguyen’s dream became an official proposal, submitted in September 2013. The Vietnamese-American Community agreed to pay for design, installation and memorial maintenance.

“We gained, like in so many cities, with this very unique population of hardworking people,” Kienzle said of Oklahoma City’s large population of Vietnamese residents residing near the vibrant Asian District.

“They are constantly thanking us for our generosity by investing in our community with their businesses and contributions,” Kienzle said. “Here is the final thank you, a commissioned piece of art for Military Park, which is in the heart of their community. Through this effort, the monument will show a Vietnamese solider working alongside an American solider.”

In 2014, the Oklahoma City Council passed a resolution supporting the memorial at Military Park and efforts by the Vietnamese-American Community to work with the city on the project.

March 1, Nguyen and Kienzel again approached the council with a joint public art agreement between the city and Vietnamese-American Community. It was unanimously approved, allowing the project to move forward once again.

The next step is a call to artists, followed by applicant review by a selection committee and selection of an artist to create the monument, Kienzle said.

The city’s Office of Arts and Cultural Affairs will administer the art selection process, which could take nine to 12 months.

City leaders pledged $10,000 toward a conceptual master plan to incorporate the monument into Military Park, which will undergo renovations and improvements over the next few years. The park’s construction costs will be paid with funds from the 2007 general obligation bond.

Nguyen will serve on the selection committee.

The monument will be visible by motorists traveling on Classen Boulevard and easy for visitors to find.

“You know how many cars pass by here each day?” Nguyen asked. “About 70,000 cars. People will see it every day when they drive by.”

It is estimated to cost $210,000. The Vietnamese-American Community has raised $150,000 and expects to raise the final $60,000 this spring with a special Vietnamese music concert.

With recent council approval, Nguyen knows his vision will become a reality: Oklahoma City will house a memorial to capture the tremendous sacrifice of service members in Vietnam.

A monument for all Americans, Nguyen sees the park as a spot for Americans and Vietnamese Americans to come, remember, reflect, honor and hopefully heal.

The Vietnamese American Community hosts a fundraising concert 7 p.m. May 7 at The Cathedral of Our Lady of Perpetual Help, 3214 N. Lake Ave. Saint Andrew Dung-Lac Church also sponsors the concert.

Donations can be mailed to the Vietnamese-American Community, P.O. Box 60394 Oklahoma City, OK 73146.