Cleveland Elementary’s Odyssey of the Mind team dominates the world. 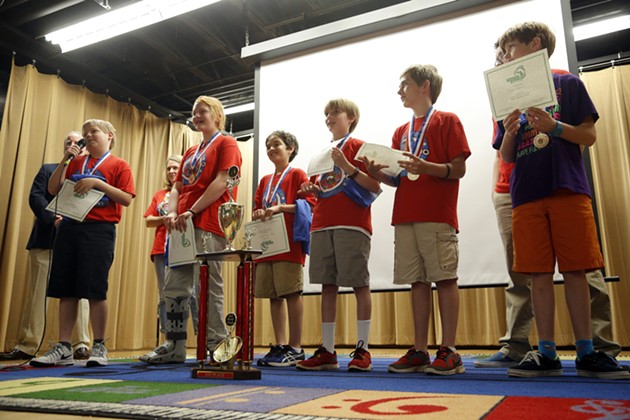 In a packed auditorium filled with 200 or so well-behaved yet wiggly children and their parents, Oklahoma City’s Cleveland Elementary School celebrated something huge. One of its two Odyssey of the Mind (OM) teams made it to the world finals in East Lansing, Michigan, and came home with the World Championship trophy.

It was the last day of school, and the annual final assembly was underway.

Teachers lauded students, students power-clapped for each other when prompted by Principal Morris and for the really big stuff, they brought out the firecracker clap, which means they made streamers with their fingers, adding whistling sound effects.

This got the crowd revved up. But when the OM team took the stage, even the firecracker clap wasn’t enough and the children dissolved into jubilant applause and loud cheers.

This is a saga of perseverance and teamwork. This team of six improbable heroes battled weather, nerves, terrible cafeteria food, prop catastrophes and even a broken bone, yet remained undaunted, eyes on the prize, until every single opponent had fallen in their wake. They beat the Germans, who had incorporated high-tech lighting effects into their competition piece. They beat the Chinese and the South Koreans. They beat a bunch of Texans. They beat the Centennial Elementary team, which had been doing its share of trash-talking. They beat everyone in the world.

They shared details of their odyssey in a boisterous group interview at the school. On the way into the room, the kids installed their trophy (which, they were quick to point out, is bigger than the chess team’s) right on the front desk for all to see.

All but one, Oswald, are veteran OMers. Marshall has been competing for four years, Cochrane and Reid for three and Keast and McLaughlin for two. Oswald, a fourth-grader, is the youngest team member. Everyone else is in fifth grade.

A couple had been to the world finals before. Marshall’s parents, Ryan and Jenn, coached the team, which met at their house.

“I am so proud of how this team has learned to work together, helping and encouraging one another, building upon one another’s ideas to problem solve and come up with some crazy creative solutions to problems,” said Coach Ryan.

He; his wife, Marianne; and their children have been involved with the program for more than 30 years. It was Marianne who got the family involved when she befriended Owasso’s gifted and talented teacher who was using the program herself.

“The program teaches students how to think divergently by providing open-ended problems that appeal to a wide range of interests. Students learn how to identify challenges and think creatively to solve those problems. They are free to express their ideas and suggestions without fear of criticism,” Zamor said. “The creative problem-solving process rewards thinking outside of the box. ... By tapping into creativity and through encouraging imaginative paths to problem-solving, students learn skills that will provide them with the ability to solve problems great and small for a lifetime.”

The group’s project of choice was an interesting one for such young students.

“We chose the silent movie because this group is focused on the theatrical,” explained Keast.

Oswald joined up because he was asked and because he had heard it was cool.

He, like all the others, plans to continue his odyssey.

When the team began its journey last October, the first order of business was to settle on which of the five problems they would choose.

The problems are designed to challenge students to solve problems from various perspectives, such as the mechanical construction or engineering of a machine designed to solve a particular set of criteria or create an original play around a theme.

The kids wrote a play, complete with an original musical score.

The main character of the story is a hamburger that has been in the deep freeze since 1915. He comes out of the deep freeze in 2015 afraid of being eaten. To avoid the fate of being consumed, he decides to make a movie so people will like him. The other character in this story is a movie critic, the critical pickle. The hamburger director creates a silent movie because he is not familiar with movies with sound because movies were silent in 1915. The movie created is an epic horror film about a villainous mouth — what is scarier to a hamburger than a mouth? This tale takes place in the town of Sense-nati. Like any good villain, the evil mouth wants three things: money, power and the total annihilation of Brussels sprouts. To get power, the mouth goes to a power plant. He fails horribly and ends up getting electrocuted.

“We have a bunch of leadership on this team. They each have their own strengths and skills that fit perfectly together to get all of the pieces of the problem solved. Plus, they just really like each other, which is a bonus,” Coach Jenn said.

The decision for the intrepid Cleveland team to compete in the category 5 problem was unanimous.

“In this problem teams will create and present a performance depicting a Director character that produces and presents a silent movie featuring a humorous villain character that commits three silly acts of ‘villainy,’” the problem’s description read. “Characters that are in the movie may not speak as part of the presentation of the movie. Instead, like classic silent films, the team will use music played on a team-created instrument and creatively displayed subtitles to convey its story to the audience and judges. Also, teams will use a signal to indicate when the movie begins and ends.”

Speaking of Odyssey Of The Mind, Oklahoma Gazette