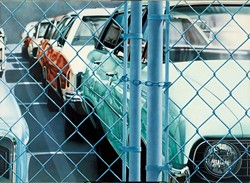 It also chronicles the various arts groups and organizations that were active in the city and transformational gifts, bequests and acquisitions that have made Oklahoma City Museum of Art (OKCMOA) central Oklahoma’s premiere collecting and cultural institution.

“The exhibition is divided into large collections from our permanent collection, so there are eight sections [marking points in history],” said Michael Anderson, curator of film and American art. “In each of these sections, we have pieces that we don’t normally have on view.”

He described the display as showing the chronology of building a museum.

“We’re telling the museum’s history through these large gifts,” Anderson said. “We’re still a relatively young museum, and we have a pretty eclectic collection. The exhibition reflects that. … There are things that are brought together because of the collections they are a part of which normally would not be seen in proximity, so there is that cheeky aspect to it, too.” 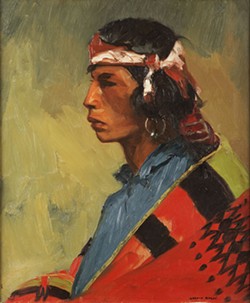 While the story of Oklahoma City art properly begins with a 1940s donation from the Works Progress Administration (WPA), its humbler beginnings came in 1916, when Nan Sheets, an artist in her own right, married Oklahoma native Fred Sheets. By 1920, the Sheets built The Elms, a gallery and home. Its opening night was followed by a two-week open house.

“They exhibited her works and some other pieces they collected in her travels,” he said. “When the WPA was in the process of establishing new art centers and galleries before that, they contacted Nan Sheets to be the first person to run a gallery in Oklahoma City.”

The museum has one of her paintings, “Sudden Shower, the Coming Storm,” in the current exhibition.

“Nan Sheets was not just our first director once the art center was established in 1945,” Anderson said. “She was an all-around focal point of the art scene in Oklahoma City for close to 30 years.”

She also wrote art criticism for The Oklahoman at that time and fiercely defended modern art, he added.

Another seminal influencer was Oklahoma Art League, founded by Nellie Shepherd, one of the state’s first professional artists.

Shepherd was born in Kansas during the Oklahoma Land Run, and her family relocated to a homestead near Oklahoma City. She went on to study art in France, where a portrait of her sister, Lottie, was exhibited at the 1910 Salon art exhibition in Paris. It won an honorable mention.

That work also is on display in Our City, Our Collection.

As a relief project during the Depression, the WPA paid artists to create paintings and murals. In the process, it amassed the world’s largest art collection. In 1942, the organization liquidated its collection to other organizations. That included 28 works given to the City of Oklahoma City, which, at that time, did not have a museum.

“Three years later, in 1945, the Oklahoma Art Center incorporated. At that time, we started as a collecting institution, starting with these works from the WPA,” Anderson said.

Eight of those pieces are on display, he said.

By the late 1950s, a new facility was built at the Oklahoma State Fairgrounds, but the association lasted only a decade before the group split into two factions over nonrepresentational art.

“In 1968, the Art Center came across the opportunity to purchase the first collection of modern art,” Anderson said. “The museum purchased it, and that led to a split.”

“Probably the most important piece in our collection, the Gustave Courbet landscape from the mid-19th century, was actually collected by the Museum of Conservative Art,” Anderson said.

The two reunited in 1989 for practical reasons, after the state and city took a financial hit due to a dramatic drop in oil prices. Throughout the 1990s, extensive fundraising campaigns lead to the 2002 opening of OKCMOA at its current location at 415 Couch Drive. 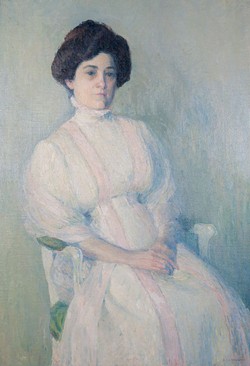 The museum recently acquired a 1765 and a 1766 pastel by John Singleton Copley. They also are on display.

“Copley was the most important portrait artist of 18th-century America, and those pieces are on view for the first time in this exhibition,” Anderson said. “They are in the museum collection for the first time on the occasion of their 250th anniversary. Those are two works we are very excited about; there aren’t a lot of pastels from the 18th century, and not many people worked in pastels in 18th-century America.” 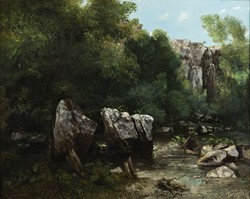 Print headline: Art, history; An Oklahoma City Museum of Art exhibit chronicles over a century of our state’s cultural heritage.

Editor's note: A quote was updated in the web version of this story to correct an artist's name.

Our City, Our Collection: Building the Museum’s Lasting Legacy