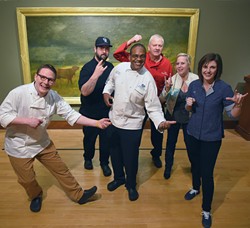 Over its 32-year history, Oklahoma City Museum of Art’s (OKCMOA) annual Omelette Party fundraiser has cracked around 85,000 eggs, entertained thousands of people and raised a lot of money. This year’s fundraising goal is lofty: $108,000 for the museum’s operations, exhibitions and programs. The event is 7 p.m. to midnight Friday at Chevy Bricktown Events Center, 429 E. California Ave.

“We’re excited about this year’s theme,” said Becky Weintz, OKCMOA marketing and communications manager. “Rock ’n’ roll transcends the generations. We encourage people to dress up in their favorite rock ’n’ roll style. Of course, you don’t have to dress up to enjoy the party.”

The event has humble beginnings and was initially held in the home of famed OKC architect and arts patron George Seminoff. Year after year, the event expanded. Its venues grew with it.

Suzanne Thomas and Matt Tipton are co-chairmen of this year’s event. They have worked with a committee of about 40 volunteers since October and assembled 55 artists and 17 chefs and restaurants that will bring their creations to partygoers.

The artists donated works that guests may win in a raffle throughout the evening. Raffle ticket prices are modest; one is $5, five cost $20 and 30 cost $100. Glass artists Rick and Tracey Bewley, fiber artist and textile designer Diane Coady, sculptor Joe Slack and many more donated their works.

Tipton has volunteered at the event for three years.

“Everyone on the committee has worked especially hard this year to bring this theme alive, and I believe we’ve done it,” he said. “We’re on our way to meeting our fundraising goals. I really can’t think of anywhere else I’d rather be that night.”

“It’s a great event that features some of the top talent in Oklahoma all in one place. This event never disappoints,” she said. “Each year, I look forward to working with the museum and getting the committee together to plan this spectacular event.”

A $125 general admission ticket ($100 for museum members) includes an open bar and egg-ceptional culinary creations from the likes of Picasso Cafe, Fassler Hall/Dust Bowl OKC, Empire Slice House and others. Crowd-pleasing party legends Frank Newcomb, Tom Lienke and Ken Bradford will hold court at their customary location next to the dance floor.

Live music from The Stars and DJ Brian Smith with Chameleon Entertainment will get guests onto the dance floor.

Although the event sells out each year, there are still sponsorships and a limited number of individual tickets available.

“We generally have 400-500 general admission tickets available for purchase, but we tend to sell out the week beforehand,” Worrell said.