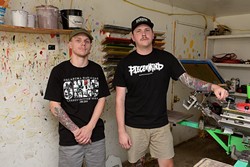 Out in the garage, temperatures swell past 100 degrees as the hot press whirls for hours. In the house, boxes and shirts take up the floor and every available surface.

Steve Ward, owner of Backroom Printshop, said eventually his shirt-printing company that specializes in printing reasonably priced merchandise for do-it-yourself (DIY) and smaller touring bands will be advanced to a point where he won’t have to work himself to exhaustion seven days a week. Until then, he is content to spend his days printing, folding and taking orders.

Backroom has serviced 350-400 entities in its five-year history, almost all of them bands in the local and national hardcore rock, punk and metal communities. In-state, the company has printed for bands like Shame, Sledge, Upright, Piece of Mind and Iron Born. It also prints for labels Wrong Ones Records and Warpath Group and 89th Street – OKC venue.

The printshop, in partnership with 89th Street, hosts its second Backroom Showcase Aug. 18-19 at the venue, 8911 N. Western Ave. All participating bands are in-state or touring groups that have printed with the company.

Backroom held its first showcase as an emergency fundraiser in 2015. A few months after Ward left his job at Whole Foods to work full-time on his printing business, someone snuck into his garage and stole $800 worth of unprinted shirts in freshly delivered unopened boxes. Ward said the thief probably saw the boxes labeled “apparel” and assumed they were something else.

“People steal them assuming it might be Nike stuff or whatever,” he said. “But it’s actually just a box of random-colored Alstyle shirts that probably didn’t have anything to do with them.”

The loss was significant, as Ward was already in a financial hole in his attempts to get his fledgling business off the ground. The company could have easily folded if bands from the local hardcore community had not stepped up to hold an impromptu concert, which became the first Backroom Showcase.

“It’s very cool that we have a community backing us in what we do,” said Chris Jaeger, Ward’s part-time managing partner.

That initial concert was such a success that a sequel seemed like the right thing to do.

“We get asked all the time when we’re going to do another one,” Ward said, “so I was like, ‘Well, this is our fifth year. I’ll throw one together.’”

Ward grew up playing in hardcore bands and attending local shows. Though he would eventually fall out of the scene for a while, that time in his life left a lasting impression on him.

Years later, Ward knew he wanted to start his own business. He kept an admiration from his younger years for people in the hardcore community who made a living operating venues or print shops for band merch. He slowly began to reintroduce himself to the scene as he tried to learn more about what it would take to print his own shirts.

Ward bought his first press for $250 off eBay (his current setup is more sophisticated) and taught himself the art of printing through books and YouTube videos.

“From the point where I bought everything originally to being comfortable printing for people and having a product out,” he said, “it took about four or five months of just trial and error: wash tests, failed wash tests, going back and forth to supply shops.”

Ward shifted his full-time attention to Backroom in 2015 and has watched the business grow steadily.

“When you quit your regular job — your chief source of income — to do your own business from your house full-time, it’s a big leap,” Jaeger said. “I think it’s a leap that not many people are willing to do, but it’s just one of those things you have to do.”

Managing a workload like Backroom has amassed in its five years is challenging for the primarily two-man operation based out of Ward’s northwest Oklahoma City home.

“If I’m being honest,” he said, “we reached the capacity where we should have been out of here last year.”

Ward said he hopes to move Backroom into its first office space in the near future. The ultimate goal is to get a warehouse space and an automatic press, but without having to take out loans, raise prices or disown the business’ following in the hardcore community.

Backroom is certainly a business first, but it is a business Jaeger said cares about its friendships and knows it owes its existence to the relationships it has forged.

“It’s not just printing for other bands,” he said. “It’s printing for people who we actually know and have relationships and friendships with. Whether they’re on the other side of the country or wherever, it’s still people we all identify with.”